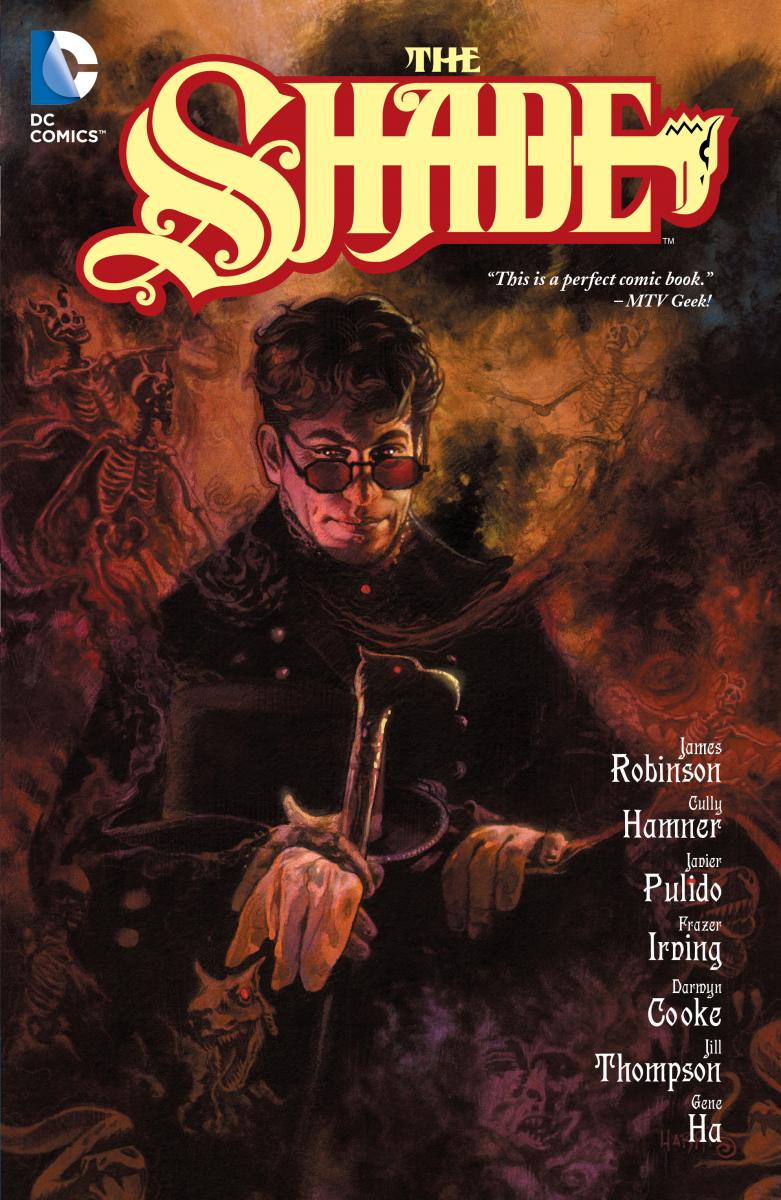 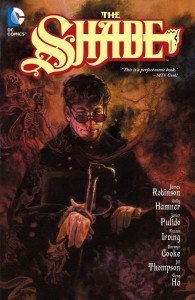 Not quite a hero, sometimes a villain… ever the gentleman, the Shade embarks on a world tour in search of those who seek to take him off the board on the way to nothing short of dominating the world. But this grand adventure is also a personal journey through history and memory, blood and family, until the man once known simply as Richard Swift must confront his own origins in order to fully understand the monster or man he has become.

Not since Starman has Robinson been so entirely in control of his own characters’ destinies, and the result is nothing short of magnificent here. Throughout the twelve-part series, the author has crafted a tale steeped in detail and minutia, none of which feels distracting or off-putting, but that forms a deep sense of rich history for this now beloved figure. One could surmise that the Shade represents a great deal of Robinson’s own idealized self, but the extent to which this formerly goofy Golden Age Flash villain has become a unique and dramatic protagonist defies such simple explanation. From the stylized language the Shade employs (by Robinson’s admission, the Shade never chooses a simple word if a much more obscure one will suffice) to the distinct mannerisms of an upper class gentleman, this character is truly unique among subjects in the DC Universe, and certainly is a much needed breath of fresh air in a comic market so many believe to be underwritten, mismanaged or otherwise disappointing in quality. No one portion of this volume can be whisked through without careful reading and great adoration for its craft, and that demand for a slowness of pace on the part of the reader is a welcome depth and a testament to Robinson’s love and commitment to the subject.

And the characters! For a series designed to tell one complete story in 12 parts — and it most certainly does — worlds upon worlds of untold stories are alluded to and introduced, not in any way so as to alienate the reader, but in perfect pitch so as to entice and inflame one’s imagination. From the Shade’s erstwhile daughter, the Spanish Catholic vampire La Sangre, to Von Hammer, the German private detective cum James Bond, Robinson introduces a plethora of vibrantly new creations stationed all over the globe that could easily be the focus of their own tales. Silverfin, Argonaut, Diablo Blacksmith, Bete-Noire, Montpelier… the list goes on and on. And in a wonderfully rare opportunity for a book (however tentatively) set in the New 52, we get to see several World War II era heroes revived and in their element, not the least of which is the gallant western hero Vigilante and the ever-fascinating, but ardently obscure Madam Fatal. Playing such a menagerie of personality and color against the dark witticisms of our main character not only illuminates his best qualities, but also develops a world so deep and full you can’t help but let it envelop your senses.

This series also exhibits an embarrassment of riches on the artistic side, with arcs and individual tales being shepherded by a long list of talent, each uniquely suited and perfectly chosen for their particular assignments. Far from creating a cacophony — as would be expected in any series that has no less than six primary pencillers — this exceptional blend of styles combines to form a magnificent symphony of presentation. It’s nearly impossible to call out any particular artist as top of the list, for each one brings something so important and compelling to the overall tale. Hamner’s initial rendering of the Shade’s features and physical presence is perhaps my favorite in the dark one’s history. Darwyn Cooke delivers a classic adventure tale like no other modern day artist can, so in tune with the nostalgic elements of the 1940s era you can practically hear the radio shows in the background of every scene. Pulido’s careful rendering of La Sangre as both a fearsome opponent and starkly endearing young woman brought this fantastic creation to full life, while Irving produced a frankly terrifying look at the end of the world, ancient Egyptian visitors, and a secret society that made every last page a masterpiece worth framing.

If anything is a disappointment with this collection, it’s that it’s softcover format doesn’t sit on my shelf nearly as grand next to the hardcover omnibus editions of its forebearer (but not entirely-necessary-to-read-first predecessor) Starman. And it clearly deserves that high quality treatment. Initially, this series was so easily lost on the shelves among flashier, more mainstream fare at the Big Two and thus its likelihood for future editions is slim. That said, The Shade is an extraordinary piece of literature and a magnificent example of the best that contemporary comic art has to offer. It is a perfect example of how to develop a story with deep history that doesn’t confuse, engage your reader for extended time without feeling drawn out, and move a character from one place to another emotionally without having to simply talk in one place the entire time. This collection is well worth the time and money you can invest in it, and I daresay, worth buying a second copy for any friend or family with a love of English literature, multi-cultural influences, or just plain enjoyable comics.