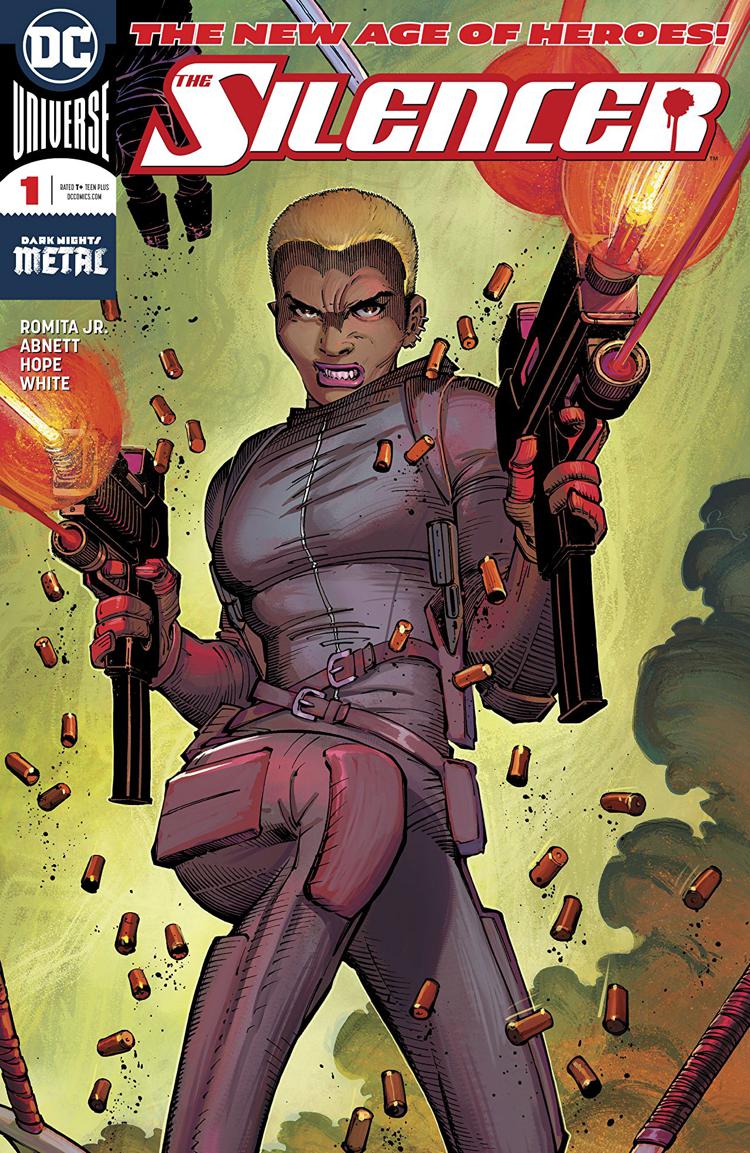 “Just when I thought I was out… they pull me back in.” The popular quote from the third part of the Godfather trilogy sums up the story line for DC Comics new book The Silencer. The book is one of the new titles to spin out of the after effects of the “Metal” story line and DC’s new line of super heroes. Though the premise may sound familiar readers will be pleasantly surprised by this storyline.

John Romita Jr. and Dan Abnett have teamed up to bring as a brand new DC hero. Though initially the pitch may sound like it’s been done before in comics, books, and movies it is definitely enjoyable. The Silencer uses the trope of the retired hit-person being pulled back in to the life she had left behind. A good thing about this story is that it very quickly gets the reader into the action. It establishes the main character, Honor Guest, and her current world while at the same time having it come crashing down around her. It’s well done and keeps the story moving at a fast pace. The dialogue is written well and gives it a fun quick beat to it. One of the best things about this story is that Honor isn’t just an awesome fighter but she appears to have some sort of special ability as well. It is a pretty cool one to have for a person of her profession. Another fun piece to the story is the appearance of another DC universe character. The inclusion of this character immediately links Honor to the larger world and shows just how much danger she is really in. It was a good move to include this character and is not just lip service for fans. Though, overall, the devices in this story are all simple and have been used many times before, combined here they give a good start for this new character. Depending on where things go from here DC may have a fresh new hero to add to its roster.

The artwork for The Silencer is great. John Romita Jr. of course is very good at what he does and gives Honor a cool look to her in and out of uniform as The Silencer. The panels are laid out and flow very well and give the reader some nice large scenes to enjoy. Romita has done an excellent job of drawing some very cool fight scenes for Honor to take part in.  The action scenes are the definitely the best part of the art in this book. There is a lot of movement conveyed in the poses and show that Honor is in form though being away from that world for so many years. Costumes for all the characters look really good, especially the enhanced individuals. Sandra Hope does an awesome job at the inks for this issue. There is some very fine line work done on the hair and in the shadows as well that really give an added depth to the characters. There is a lot of detail that could have been lost but her inks very carefully preserve the finer points. Dean White provides bright vivid colors for the story. His colors point to the happiness that Honor has found in her life apart from being the person she was before. As the story progresses and comes to an exciting end we end up with a large number of deadly blacks and reds as the prevailing colors. It takes the reader out of the happy family life and into the old world she used to be a part of.

Overall The Silencer is a lot of fun to read and is the perfect introduction to Honor’s world. The reader should be hooked to come back more with this issue  and hopefully it keeps up the pace it starts with. There is enough here to build up and on to in order to really flesh out this character and keep it from becoming too trope-y.