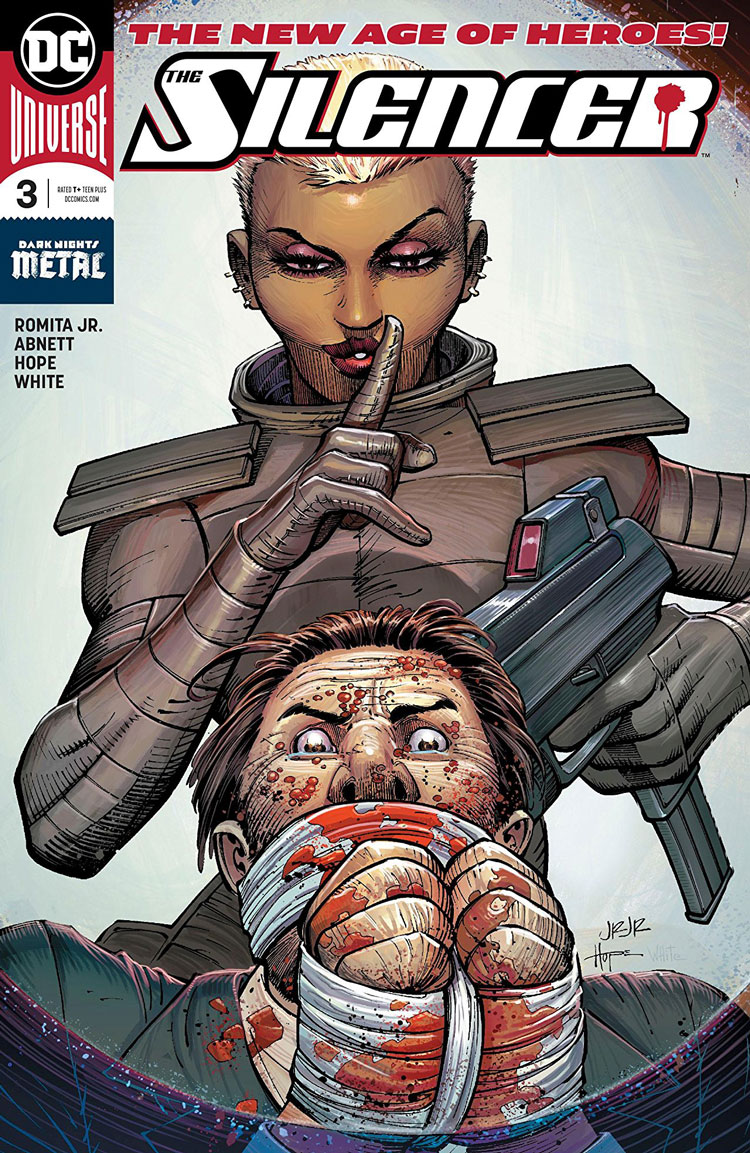 The conclusion to the first arc of The Silencer ends in some of the biggest explosions, shootouts, and fights you’ll see in a comic book. Our titular heroine has a battle ahead of her and it’s mostly done in silence.

Honor is caught between hundreds of soldiers in a hard place thanks to Remedy and his plans and Romita and Abnett showcase why Honor Guest is a force to be reckoned with for another issue where it’s more about seeing what Honor does under pressure than moving the plot leaps and bounds ahead.

Romita, Hope, White, Prianto and Printo are stunning on their respective art duties. Romita’s pencils range with Hope’s inking outlining Honor in panels and in others almost losing her in the chaos which she thoroughly enjoys. The Zone of Silence is on full display again and it’s the most we’ve seen the power utilized in combat yet. White’s colors in the Zone are sparkling, lightly tinted with blues and pockets capturing all of the would be noises. Hope keeps all of the chaos and destruction by Romita intact, never losing focus of Honor in the quiet firefight.

Abnett continues to guide her thoughts throughout, letting us understand and observe her mindframe. Honor is a professional and Abnett and Romita display her as nothing but the best. The panels collide with her inner monologue about the life she’s inadvertently in again and she reads as a strong, capable person that’s sure of yourself and doesn’t take any nonsense.

Romita and Hope display the beautiful destruction that goes along with her line of work. Panels that would otherwise be chaotic and clunky are outlined smoothly thanks to the inking and colors from White provide a seamless transition from inside the Zone and outside of it. Abnett and Romita also steadily bring in new characters that will no doubt make Honor’s world more complicated as issues go on, the potential big bad reads and appears as your typical mob boss that needs the protagonist taken out because they’re bad for business.

The designs in The Silencer are unique and stylized with Romita’s pencils working heavily in favor of environmental destruction and expressions and stocky builds without everything appearing clunky and jumbled. The lettering from Napolitano gets put to use when we see the radius of the Zone of Silence in comparison to the rest of the world with Romita pulling back the up close and personal view of Honor in favor for more widescreen action.

White’s blues of the Zone move with her and a specific part of the environment as she clashes with the bombastic reds, oranges, yellows, and browns around her that continue to get more muddled as the battle rages on. Once out of the Zone, the lettering takes full use of the firefight with bullets whizzing past Honor and even hitting wood and other objects around as she figures out a game plan. The game plan being a tank and an explosion that brings the entire place down.

With the battle to survive out of the way, Romita, Abnett, and the art team reel it in for the conclusion that brings it back to the core of what The Silencer is about: A warrior trying to keep the normalcy she fought decades for intact and live peacefully. There’s a great scene that has White and Prianto juxtapose Honor’s position in a diner being under the lights with her fears of being watched and targeted by those who would do her harm in the dark with Romita zooming in steadily to reinforce the inner dialogue that she’s back in the dangers of her old life and she wants out.

Unluckily for her, the events of her most recent battle have attracted the attention of a high profile DC character, (with references to others) that fits smoothly into the world of The Silencer with a final page that should entice anyone to continue this new title pass the first arc.

The Silencer concludes its first arc showcasing the talents and specialities of its title character with more glimpses of a supporting cast that infuses what’s great about the known DC Universe and how storytellers Romita and Abnett are making new threats and characters to keep the wheel turning on the threats Honor will have to face. The art team puts their best foot forward with the display of Honor’s huge battle at “Maulmart” that allows for Romita, Hope, Prianto, and Napolianto to absolute smash everything to pieces with a style of refinement that makes sure nothing ever gets crazy enough that they lose their way.

The Silencer is shaping up to be a stand out among “The New Age of DC Heroes” and this issue is another example of that.