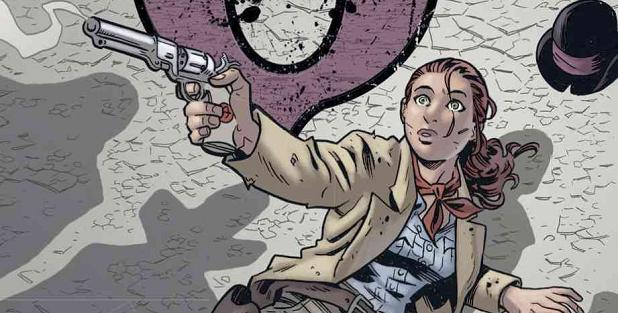 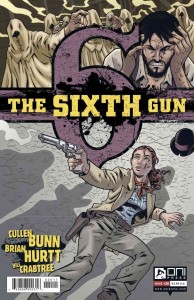 Month after month, The Sixth Gun continues to impress me. This issue is the 20th in a long line of fantastic comics and like all it’s predecessors, does not disappoint. Cullen Bunn is crafting this world masterfully, never tipping his hand as to the mysteries of this wild west filled with magic, sorcery, and mystery like I have never seen in a western. Bunn’s script evokes a palpable tension as our two primary characters are against a wall and the odds and guns completely outnumber them. In this issue he continues to explore the lore of the Sixth Gun and he strikes a fantastic balance of discussing history while chaotic action is occurring in all directions. The pacing of this issue is excellent with pages casually drifting into one another without pause or any confusion. The Sixth Gun really is one of those comics that seems to be written effortlessly because it is so well crafted.

On the art side of the coin Brian Hurtt delivers pencils just as strong as the script. As this series has progressed his art has gotten stronger as he settles in with the characters and the unique mix of the fantastical and the West. Hurtt visually escorts us to the world of Eastwood mixed with the arcane and creepy for a book that is unique and easy on the eyes.

The Sixth Gun is one of those books that you should be reading, it’s as simple as that. Get the trades, get the new issues, you will enjoy them.