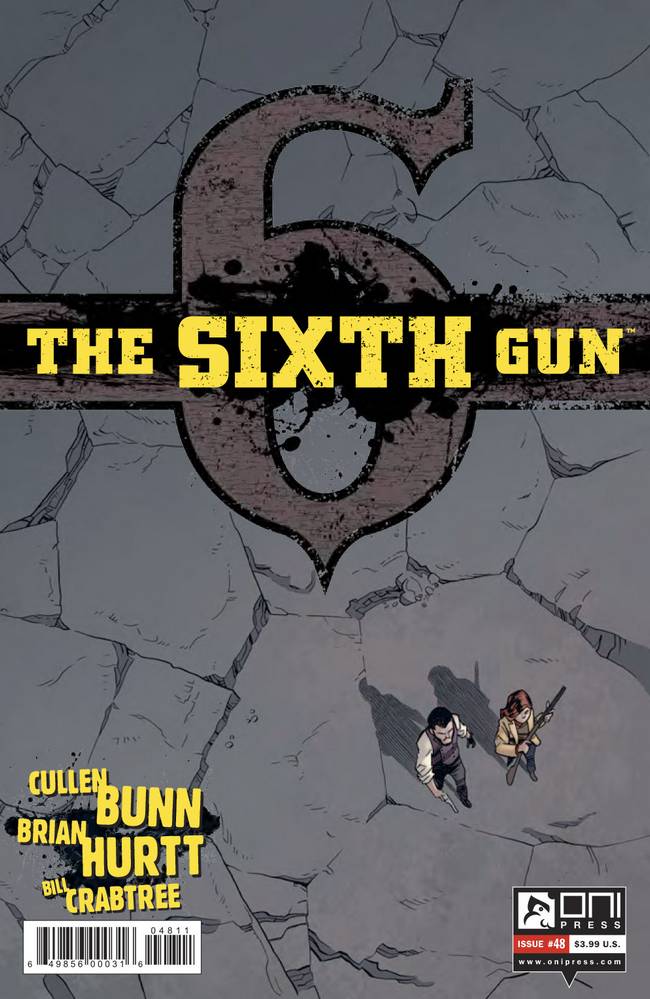 The slow march to the end has resumed. We’re in the final arc of The Sixth Gun, folks.

Luckily, for long time readers of the series, these creators are keeping the book strong right to the finish line. Issue #48 continues to bend the story in unpredictable ways and is still walking that utterly unique line of adventure/horror/western comic that only Sixth Gun has ever been able to tiptoe across. With the break after issue 47, it did take a couple pages for me to get my mind around where the series is at, but once I got there, I was fully immersed in this world again. And oh, what this world is…I almost have a hard time quantifying all the qualities of this world that I find wildly entertaining. It is filled with magic, mysticism, horror, and a great sense of adventure that has been built masterfully over several years. Bunn, Hurtt and Crabtree have built an entertaining world here, and issue #48 reminded me why.

Cullen Bunn’s script has the perfect balance of dialogue and letting Hurtt’s strong pencil work do the talking. These characters are some of the best Bunn has ever worked on and how this team is building them, even so close to the finish, is really compelling. Even in the final arc, this isn’t just a throw down for all the chips, these characters are still being built up and rounded out. This issue is setting up the firestorm that will inevitably close this series out, and Bunn sets it all up nicely with this issue. This is well written and had me hooked from the first page to the last.

Brian Hurtt’s artwork is rock solid. The world of The Sixth Gun is visually unique and impressive, with his consistent pencil work building it out nicely no matter the location. Bill Crabtree’s colour work gives Hurtt’s pencils a punch of power, making all the right pieces leap from the page. The two deliver pages that are powerful and engaging, and their visual skill makes these characters work. There is some crazy stuff happening here and the visuals sell it and as The Sixth Gun comes to a close it is only getting better on the art front.

The Sixth Gun #48 is a great issue to kick off this last part of the story. The plot thickens with each page and I applaud these creators for continuing to move this story along rather than just having a 6 issue gunslinging blowout to cap all this off. This comic is as unique as ever and anyone who has read the series at all needs to catch up and be ready for Bunn, Hurtt and Crabtree to bring this one home.