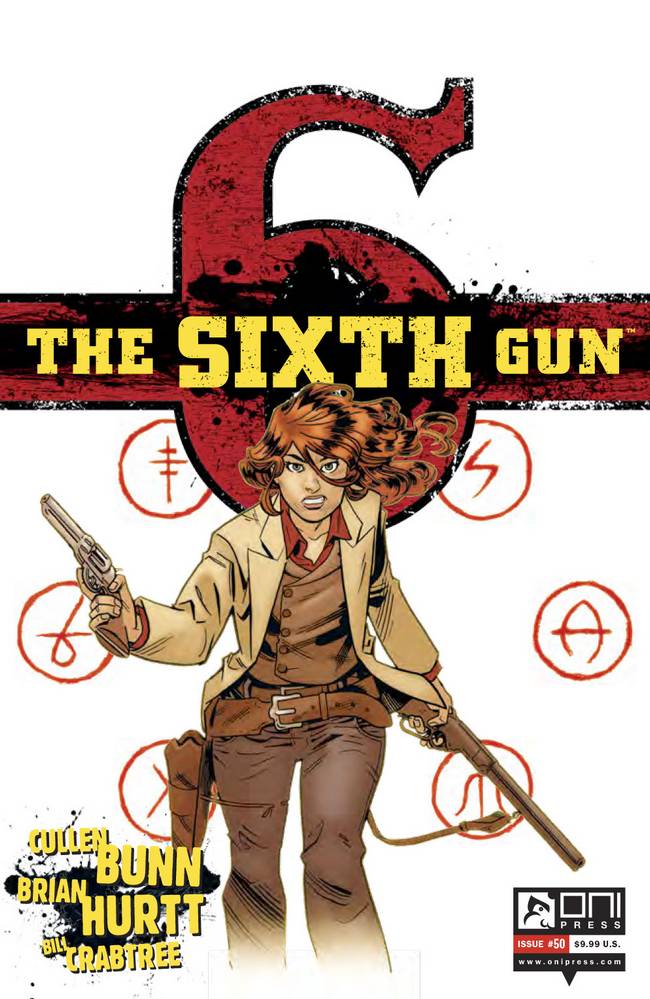 The end is, quite literally, here. Will Drake and Becky finally end the cycle of those dastardly guns? Bunn, Hurtt & Crabtree take their time and let the story come to the proper finish it deserves with the triple-sized Sixth Gun #50.

For about a year now, I’ve wondered how this team was going to bring The Sixth Gun home. It’s been one hell of a ride and I’m happy to say the added pages allowed this team to bring this series to a close in the right way.

It’s a big tale, and it is the best thing Cullen Bunn has ever written. I speak of the series in its entirety with that statement, but it also fits with this finale. His script nails the landing, bringing back all the fan favourite characters I wanted to see, unleashing some batshit crazy monstrosities and closing out The Sixth Gun in a way that is very appropriate for the world this team has built. There’s a sadness to this finale that tempers the insanity of it all, and continues this book’s trend of being many things at once. This issue is equal parts Western, horror, epic fantasy and tragedy, an utterly unique blend that they pulled off. This finale could have tanked very easily. It could have crumbled under the weight of all it had to accomplish, but it didn’t. The pacing of the story was balanced well, the characters stayed true to themselves until the end, and Bunn delivered some of the best dialogue I’ve ever seen him write.

Brian Hurtt and Bill Crabtree go for broke with this finale, leaving everything they’ve got on the page and it looks magnificent. There is not a single poorly crafted panel in this triple sized issue, and they set a brilliant tone for all the different aspects of this comic. They perfectly render the determination in Billjohn’s eyes, the sadness that is palpable in several characters toward the end of the issue and the climax is visually engaging. The war is as visually impressive as you’d expect it to be with all this build up, and the somber final pages close this series out brilliantly. Hurtt’s pencils are sharp, his layouts are dynamic and these characters look absolutely fantastic. This is some top notch artwork, finished off nicely by Bill Crabtree. The unique visual package that The Sixth Gun has always been didn’t falter toward the end, and these last few issues have shown that Hurtt and Crabtree are one hell of a pair of visual storytellers.

The Sixth Gun #50 is a great conclusion to an epic series. This issue is filled with great storytelling from end to end, and I’m sad to see Bunn, Hurtt & Crabtree’s epic go. Should this world ever be revisited, I’ll be there to read it with arms wide open, but for now I’ll revel in the fact that I received a damn-near-perfect finale and celebrate the amazing series that was The Sixth Gun.