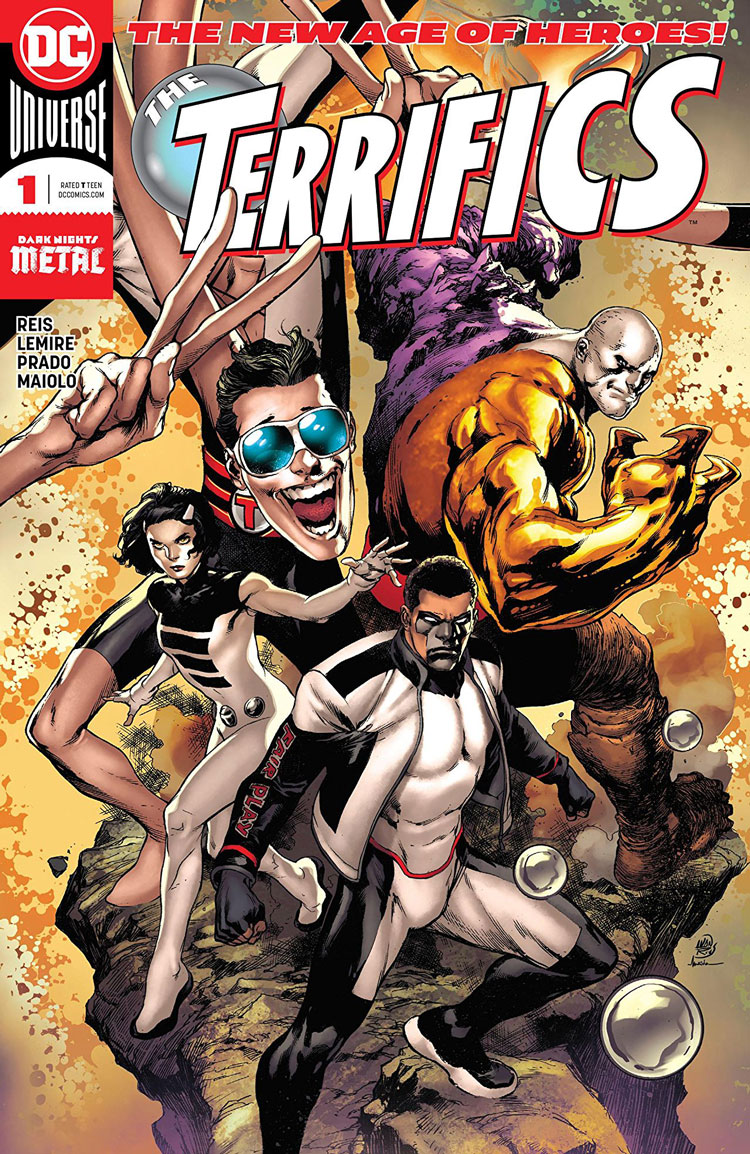 You had me at Metamorpho. As a fan of the Element Man, the rest of all that is icing, gravy, second helpings, whatever metaphor you want to use for enjoyable excess. As a reviewer, I looked forward to The Terrifics #1 from a technically sound craftsmanship point of view: Jeff Lemire, Ivan Reis, Joe Prado, Marcelo Maiolo, and Tom Naplitano are a fantastic quintet of creators.

Any ONE of those creators is a name worth crediting on a book, as you know you can expect high quality work from them.

All together? Yessir, this is a comic book recipe for something to really check out.

In a recent interview with John Siuntres on Word Balloon, Lemire revealed that he originally wanted to do a Metamorpho story, but Dan DiDio convinced Lemire that Metamorpho needed a larger cast around him. And he wasn’t wrong.

I’m not sure if that’s the primary driver or if it’s just that Metamorpho is the only one of the fantastic foursome of characters brought together in this book who has a distinctly recognizable supporting cast, but The Terrifics #1 is a solid introduction to Rex “Metamorpho” Mason; Simon Stagg; Sapphire Stagg (Simon’s daughter and Rex’s frequent love interest, although the extent of the latter in the Rebirth era remains to be seen); and Java, Simon’s lackey/bodyguard, who just so happens to be a caveman.

If for no other reason than to see Reis draw Java, Simon Stagg, and Sapphire Stagg, I had to pick this up. Except Reis doesn’t just draw characters – he fills pages. With his most reliable and distinctive inker Joe Prado slinging shadows, Reis is given a wide open canvas to explore – strange mysteries and suspenseful tales.

The Terrifics #1 is filled with gorgeous art, as Maiolo brings all sorts of lighting effects, bold color choices, and complementary tones that have a bit more of an uncommon range for today’s DC Universe. Terrific enters in a burst of light with lens flares and dynamic shadows, augmenting the drawing Reis gives us and amplifying the solid areas of darkness Prado locks in.

While the cast of characters brings a fun range of colors (Metamorpho’s purple, orange, brown, and gray; Plastic Man’s red, yellow, black, and blue; and Terrific’s glowing T-spheres), Maiolo doesn’t leave the rest of the crayon box alone. No color is too far afield for this book, with neon greens, purple haze, and magenta mist wafting through the pages. It sure is darn pretty to look at.

And the story is fun, too. Napolitano is given a chance to play with sound effects and dynamic lettering all over the place. Mister Terrific’s entrance is punctuated with a logo-worthy tag, Metamorpho’s first panel bursts out of the word balloon, and Plastic Man has sound effects that blend into his dialog, almost as if ALL of Plastic Man talks, or at least contributes to his dialog. There are over a dozen different exclamations in the key scene that brings the group together in The Terrifics #1, and none of them are repetitive. Napolitano makes the effort to distinguish everyone’s dialog.

There’s not a great deal of character development in this issue, as The Terrifics #1 opts for forming the team through the story’s circumstance, rather than introduction through exposition. Lemire gives each character a role to play, and a voice of their own. Yeah, some of the dialog winds up being a bit hokey (“. . .I guess that’s why they call me Mr. Terrific.”), but hokey is what we need every now and again, especially in a comic with a painfully familiar egomaniacal foe and a caveman by his side. (Seriously, watch the news or read some tweets then take another look at Simon Stagg.)

Ivan Reis and Jeff Lemire are credited as storytellers, which, I suppose, should be expected, given that this title is part of the artist-centric push under “The New Age of DC Heroes” banner.

I have a couple little gripes, like I’m not totally certain I understand where Plastic Man came from. Reis is usually very clean in his storytelling, which is true for the majority of this issue. Just look at the sample pages where Java escorts Mister Terrific into the lab. There’s a panel the size of a band-aid that tells the story of Terrific’s confidence and his attempts to rattle Java, which are succeeding. In. The. Size. Of. A. Band-Aid.

In another panel, Maiolo gets Rex’s leg colors mixed up. Sure, it could be story-driven. It could be a given that Maiolo was referencing the previous page, wherein Reis drew a near-mirror image of Metamorpho, or it could just be Maiolo finding his Metamorpho groove.

My last gripe is that once this story gets clicking, it ends. Almost immediately. We meet Phantom Girl and before we can get to know her, the issue hits its stop. Reis and Lemire pack this comic with so much, but it REALLY should have been a double-sized first issue, just to give us readers more to celebrate in what should be the fantastic flagship of “The New Age of Heroes.”

One of the most spoiled “surprise” appearances in recent comics (it’s right there on the cover) is waiting for readers in The Terrifics #1, but all the same, Lemire, Reis, Prado, Mailo, and Napolitano make it surprising and downright fun. In that interview I mentioned earlier, Lemire discussed the fact that he wanted to do a comic that was fun, adventurous, and all ages – not dumbed down, but sharable and enjoyable on levels for all ages.

The Terrifics #1 is every bit of that. If it were summer, I’d turn on the box fan, lay on the floor and give this another read. Or maybe I’d take it to the treehouse. Either way, I’ll still have it when warmer weather rolls around, it might be dog-eared by then from the reads in between, but this is one of those timeless, fantastically fun comics that reminds readers what comics are all about or can be about.

In short, everything about The Terrifics #1 is, well, terrific.