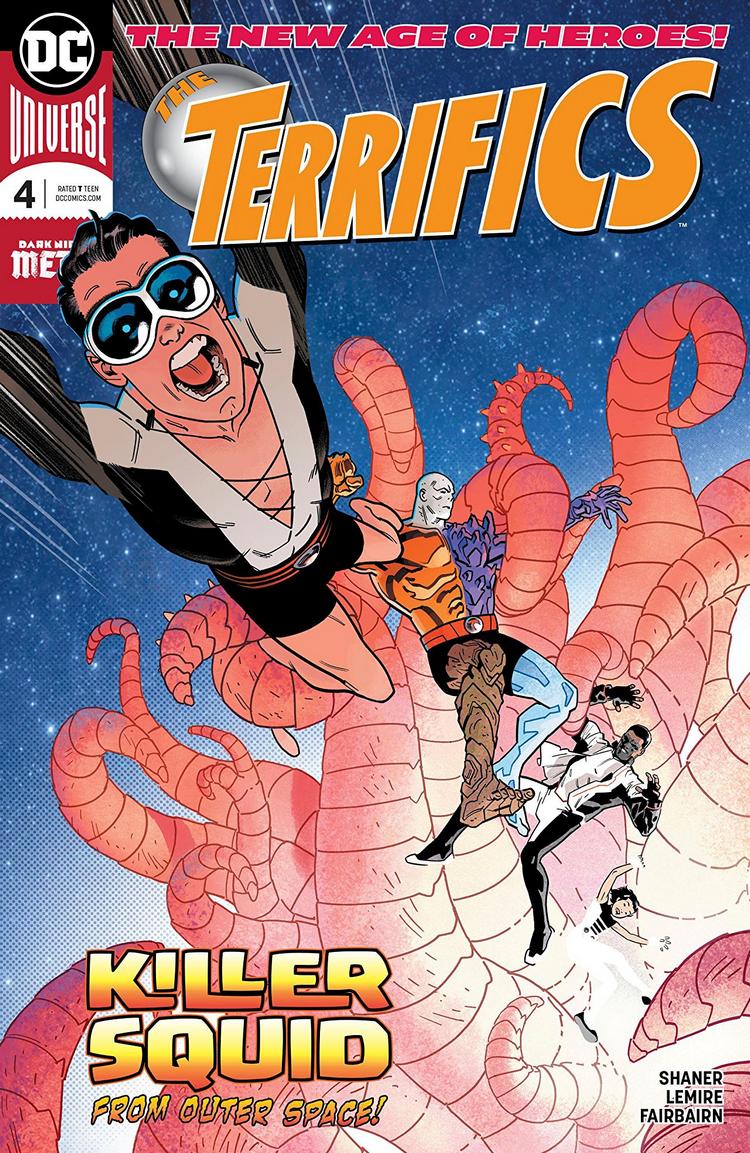 The Superhero Team unofficially dubbed “The Terrifics” come into shape with this adventure in the stars with a focus centered around Phantom Girl for the beginning of Shaner’s time on Terrifics.

In Lemire’s newfound team, Phantom Girl is the biggest question mark and her spotlight issue fleshes her characterization and voice out. We’re traveling across space and catching up with the team in the process through Phantom Girl’s eyes. Shaner’s pencils bring a sense of golden-age science-fiction heroics with great displays of team camaraderie to boot. The panels are kept tightly focused on the characters with Phantom Girl narration surrounding them, providing her own thoughts on her teammates. Metamorpho and Plastic Man continue to be a dynamic duo of sorts on the team. The two have a moment with a rock-paper-scissors game along with their journey and it provides some momentary quiet before the storm that fills out the adventure. Fairbairn colors are perfectly suited with Shaner’s take on the team. It’s bright and radiant with personality to compliment Shaner’s pencils. There’s a lot of fun to be had with Plastic Man powers in the panels as he shifts from Astronaut, Regular Outfit, to more shapes and sizes when they get captured on a Garbage Ship and into the hands of a Space Squid!

Lemire handles the team dynamic in battle quite well, keeping in league with a team of people who have the capacity to work together…but still have time for bickering mid-fight. Shaner has a lot of room to flex with his pencils and the more creative members namely Metamorpho and Plastic Man as they fight a giant squid. Fairbairn’s colors and Napolitano’s letters work in tandem on two panels in particular that show the sounds from solids to gas with Metamorpho. What’s to follow is a separation of the team to give us some development between our cast of Heroes. Metamorpho and Mr. Terrific are dipped in darkness and have a conversation that up on their history and character archetypes. Mr. Terrific is the no-nonsense leader that needs to consider all the variables in front of him, coming off cold and absolute in his choices leaving little room for faith. Metamorpho is the tortured figure and gentle giant that wants help for his condition and Terrific is the right man for the job once they get out of their predicament. Shaner’s pencils are really a delight on this cast, the expressions, and character designs are all varied and maintained throughout with Plastic Man never staying quite still to be his base form. Plastic Man and Phantom Girl have a tender moment together that shows the functionality of the team coming into form despite the problems afoot. Fairbairn’s colors escalate and brighten for the action scenes making our Heroes stand out more. Shaner balances action and talking scenes without missing a beat, his pencils incorporate so much energy into them when it comes to the characters and their facial expressions that make the adventure worthwhile.

Lemire has a steady handle on his new found team with this adventure that adds to the team’s chemistry and gives one of the newer characters a story that ends in a twist that might cause you to bring out the tissues. Lemire might have fun putting his team through the ringer and giving them the adventure to go on but he brings it home for one of our Heroes that packs the entire issue with an emotional center that Shaner tragically captures as the news sets in. The Terrifics have finally found their footing with room to improve in this adventure concerning Phantom Girl and a few mysteries that are no doubt being planted for stories and dangers for the team down the line. Lemire, Shaner, Fairbairn, and Napolitano have delivered on an issue that speaks to how the art and writing can elevate a book to what it can be in full form. The Terrifics have their own corner of personal stakes, science fiction pulp, and uniqueness to shine as a New Age of DC Book and issue four is the start of those pieces of goodness.