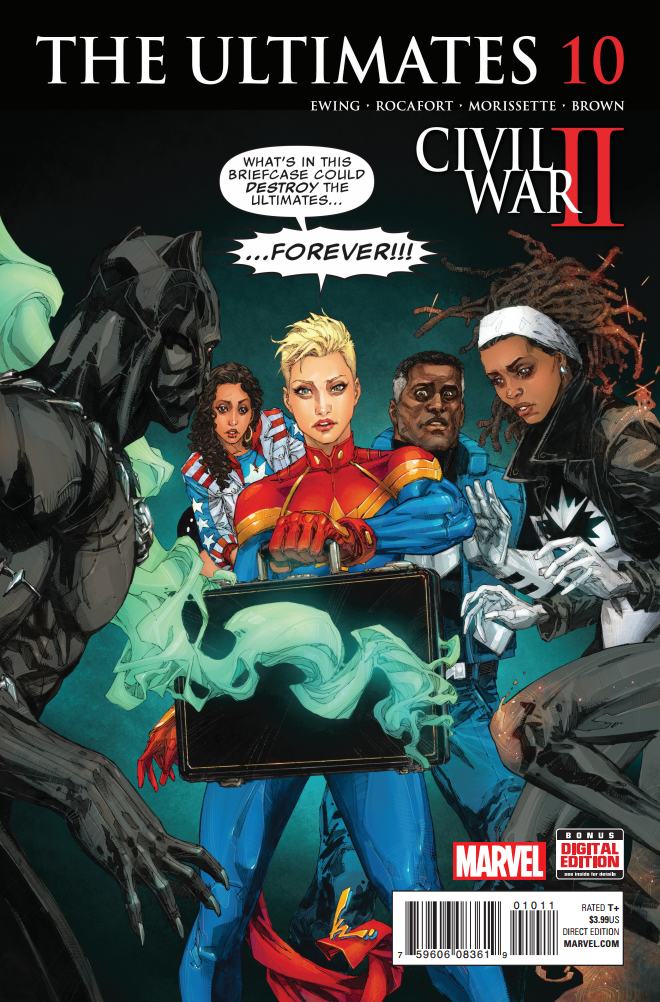 I have unfortunately found a Carol moment that makes me more sad than her interactions with Julia Carpenter in the first Civil War. *sad face*

Tension is mounting between the Ultimates as Carol apprehends Alison Green. Adam and Monica have differing opinions, while T’Challa watches and America prepares herself. Soon, chairs are exchanged with energy blasts as a sinister presence plots to use the divisions among the team to his advantage.

This issue makes me sad, but it is incredibly well done. The Civil War II aspect of Ultimates helps to frame how Carol’s actions are affecting her friends and her team. The fallout of this issue is immense, and there are a lot of questions left to answer. This issue takes a lot of important elements from the previous ones and combines them in a way that does the overall story and the characters justice. Rather than this being a one-off issue tied to an event, it has real ramifications for the entire series, which I feel is a mark of its success and quality.

Al Ewing’s writing is on point. I love the framing, and Thanos is an excellent character to help sew seeds of discord between the Ultimates. Ewing’s use of plot threads is commendable, as they have been consistent through the run of the series thus far and the way they tie in this issue evokes a lot of emotions and responses. The fight between the characters is complex and feels authentic, even as alignments quickly shift. Based on storytelling, this may be Ewing’s best work for the series so far.

Just like Ewing has created an awesome narrative framing, having two artistic styles on this issue accomplished an important visual feat in separating the story. Let’s start with Djibail Morissette, whose softer work in this issue ironically intensifies the conflict between the team members. Morisette’s lines are thick, but much more round, which I feel helps to more strongly emit the feelings from each of the characters. Their expressions are powerful thanks to Morissette’s work, setting the stage for the explosion later on. Kenneth Rocafort, always the all-star, frames the rest of the issue with an atmosphere of excitement, intrigue, and sinister motives. The throwdown between America, Adam, Monica, and Carol is wonderful, and Thanos’ conversation with Connor is constructed with care. Rocafort’s images are rough and visually edgy, heightening the feelings behind each punch and Thanos’ calculating demeanor. Dan Brown’s colors are subdued in Morissette’s scenes, intensifying emotions, which helps Carol stand out as a focal point. In Rocafort’s scenes, Brown uses a similar effect, Carol as the focus, while adding brilliance to the displays of power during the brawl.

Just because this issue breaks my heart does not mean it’s not good. It’s actually exemplary. This creative team brought together many different elements to capture the difficulty of the Ultimates’ schism while relying on older plot devices to drive the series to a creatively complicated but well-executed place. I’m excited, and scared, for what’s coming for the Ultimates, but the series is definitely in the right hands.