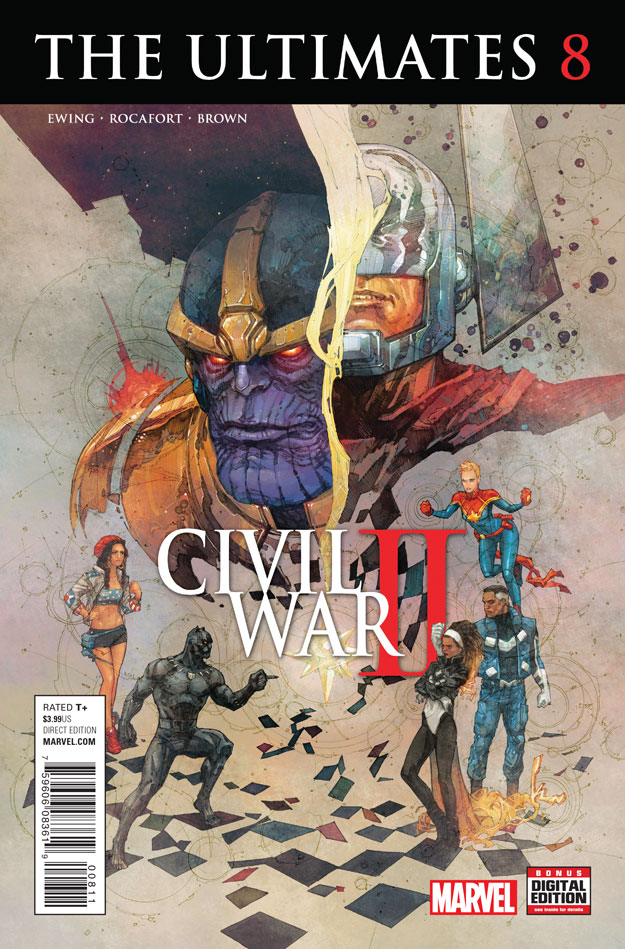 Let’s go back to the start.

From the formation of the team to the heartbreaking aftermath of the fight with Thanos, we get a trip down memory lane for the Ultimates. As Carol assembles her crisis averting team of superhumans, the government is much more wary of their motives and members. Later, the team is approached by Ulysses and Medusa, eventually apprehending the legendary Titan, though with tragic results, leaving each member of the team reeling.

Ultimates #8 adds to Civil War II by showing not only how the team came together, but the events that have unfolded around the crossover’s first two issues. This chapter enhances the drama and the emotions seen at the start of the event, showing Monica’s guilt, America’s silence, and Adam’s attempt to be emotionally centered. Within the context of the Ultimates as a series, this issue provides important background regarding the team’s formation and its underlying philosophy. Carol is truly dedicated to keeping Earth out of harm’s way, but is also dedicated to doing so with eyes on the team and with deliberation and welfare for her world and her friends.

Al Ewing’s writing in this issue is as political as it is emotional. While Carol is the main mechanism of the story, each of the people she corresponds with in the first half of the issue are people of color, each with their own motives. Monica, Adam, and T’Challa all have interests in stark contrast to the clandestine intentions of the Illuminati, which Monica mentions, and they all are dedicated to resolving conflict with as little violence as possible. This framing is important considering the racial climate of America, particularly within the past few years. The inclusion of the White government officials heightens this narrative by casting them as ignorant and lowkey racist. I enjoyed this story because Ewing dared to write it with blatant social themes that reflect the state of our country and the comics industry. I do hate that America is only referenced and has no speaking lines, though I am glad Ewing openly mentioned her girlfriend.

Kenneth Rocafort and Dan Brown are a stellar team regardless, but their talent is truly evident in their ability to display environmental distinction through each scene. Some pages are bright and pristine, while others are mired by grit and destruction. Rocafort adds remarkable levels of detail in each of the characters, especially in the pages with the government officials and the emotion-rife exchange between Monica and Adam. Brown plays with brightness in each of the panels and has a clear understanding of how to modify hues to create dynamic emphasis in the art.

Two characters are points of interest visually throughout the issue. First, there is, who Medusa is artistically one of my favorite characters, all because of her hair. I jest, but her prehensile locks really do create an interesting visage. Rocafort and Brown’s teamwork prove this by giving her hair a sense of life, each strand swirling and writhing. This team’s style is great for showcasing movement, and such a method comes to life in Medusa. Second, Carol is extraordinarily bright throughout the issue, and many of her surroundings are darker or more grounded, which allows her to be a point of contrast.

While the major development in this issue is the team’s formation, it provides necessary background for the characters and likely how their roles will play out in this series and Civil War II. We get much more of their feelings regarding being on the team and after handling the conflict with Thanos. I like that this issue provided vital information regarding the theme of the Ultimates, that it is very much political, and that more attention is paid to how they respond to the loss of Rhodey. Ultimates #8 is a great character exploration issue that provides a benchmark for the characters and the team as they move forward.