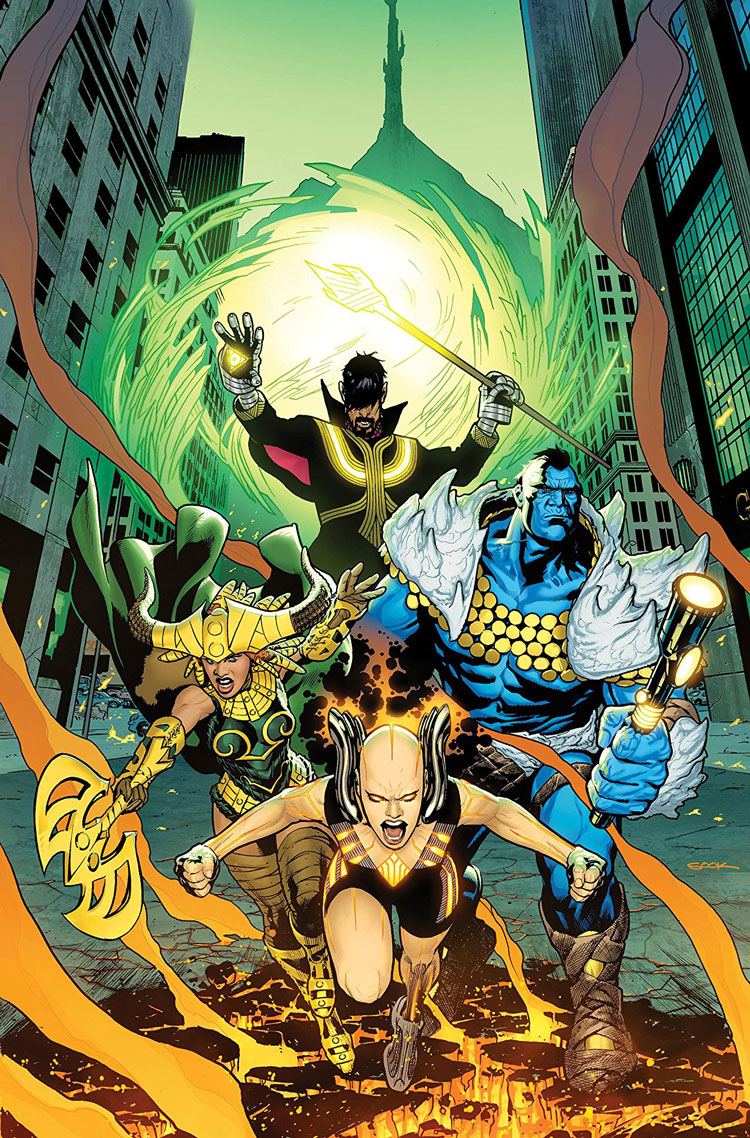 The Unexpected #1 is full of, well, unexpected stuff. I didn’t know what to expect going into the title, save for the fact that there were some visually striking characters in the push for the series: a big blue dude, a fiery chick, and a woman Viking warrior? OK. Sure. I’m game.

Then the preview hit. With Firebrand.

Since I was one of the thirteen people who bought the 1996 Brian Augustyn/Sal Velluto Firebrand series (and liked it), the preview of The Unexpected in whatever recent DC issue caught my attention and sparked my imagination. It’s not the same character, but the spirit is there – fight waged for survival, flames, and something different.

Scripter Steve Orlando stokes that imagination and throws on some imaginary lighter fluid, giving The Unexpected a fast-moving tale that clearly has a deep legacy behind it. Except we don’t need to know the whole legacy. Heck, Orlando barely gives us any legacy in The Unexpected #1, save for the story hitting the ground running and blowing stuff up – a comic book legacy to be certain.

Part of the “blowing stuff up” involves the Bad Samaritan, who looks like the love child of Macho Man Randy Savage, Danny Trujillo, and Rob Zombie (what a strange ménage a trois that would be) and burns up the scenery in a very literal sense, particularly as he fights Firebrand, who turns out to be (or rather “contain”) the impetus of this tale.

Orlando exhibits a knack for Grant Morrison-level conceptualizing and even takes it a step further to take some of Morrison’s concepts, add them to Orlando’s own story, season them with gorgeous art from pencilers Ryan Sook and Cary Nord, inkers Mick Gray and Wade von Grawbadger, colorist FCO Plascencia, and letterer Carlos M. Mangual. The result is a comic that is filled with energy and potential, but sparse on “tried and true”. Y’know – the unexpected.

The roster of characters in the comic include a reconfiguration of Neon the Unknown, the Ascendant (the blue-skinned hulking slugger) and Viking Judge, who is quick to leap into battler, and a bit reminiscent of Barda. Certainly, there is no one in that cast who readers were clamoring to see, which is exactly why Sook, Nord, Orlando, von Grawbadger, Gray, Plascencia, and Mangual are able to explore, experiment, and (apparently) exterminate.

I could not specifically delineate Sook from Nord in this comic, as it’s been far too long since I’ve seen the work of either in a book, let alone both, and I’m uncertain how the inkers align to said pencillers. I’m sure some digging and clicking will reveal all, but for the most part, the four visual collaborators do a nice job of casting characters, moving the story, and describing the detail. There is an occasional image that could be a bit more clear – like Pat, the bartender, is he a meta? – but other parts of The Unexpected #1 are so crystal clear, they’re darn near mesmerizing. The scene on Thanagar in particular is so striking that I found myself flipping back to it several times after I had read and re-read the comic.

“Punch First” is a solid opening chapter of the first story arc of The Unexpected, which itself is titled, “Call of the Unknown”. The outcome — and the final image – of this comic are definitely unexpected. And then some. Each page, right up to the end is a bit unexpected, and I have no concept what might be next, save for $4 going to DC and The Unexpected #2 going into my read pile.