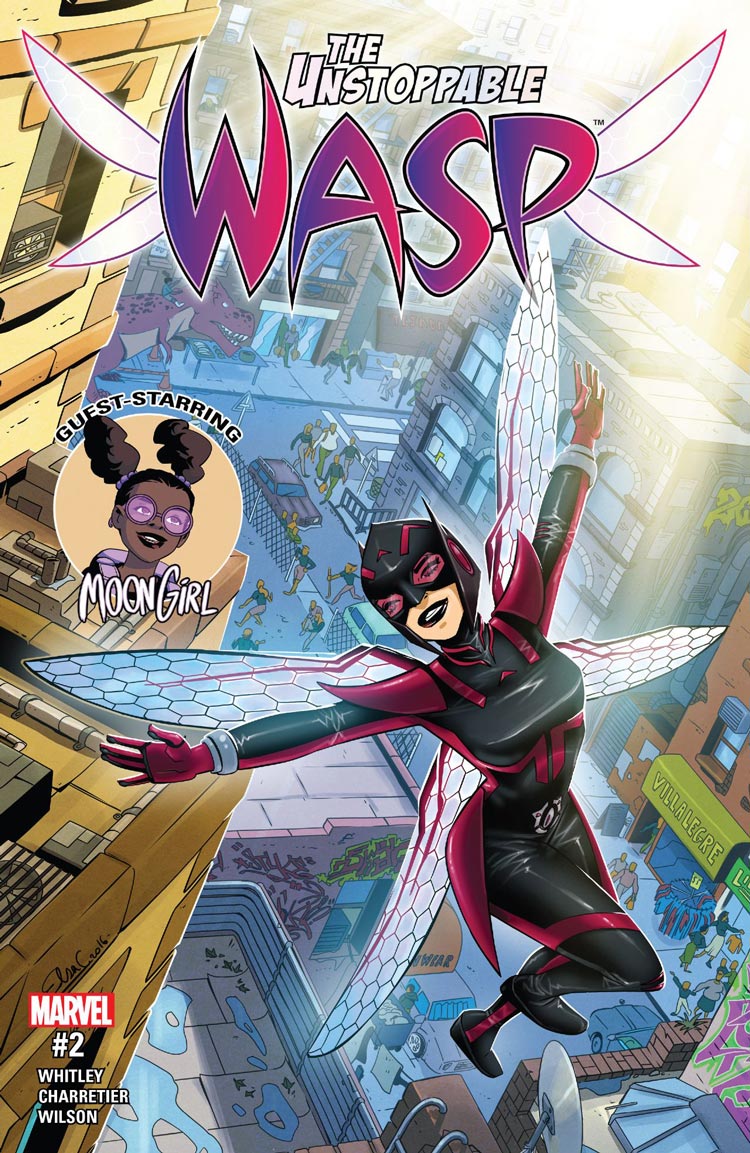 The Unstoppable Wasp #2 features a recruitment drive wherein Hank Pym’s daughter, Nadia, (are we OK calling her Nadia Pym, or is it just “Nadia”, like Madonna?) sets out to find a new lab partner and to add to the G.I.R.L. (Genius In action Research Labs) roster.

Writer Jeremy Whitley, through Nadia, points out that as scientists like Hank Pym, Tony Stark, and Bruce Banner have sought out the next generation of big brains, their searches have been narrow in scope, essentially seeking out younger versions of themselves. Nadia sets out to find young female minds to partner with in her quest to make the world a better place.

Whitley writes Nadia as a fun balance between woman-out-of-time, electrically energetic fangirl, and confident protagonist, that the reader never even has to consider whether or not they like Nadia, they just do. She has a knack for science, a flare for testing out fashion (Janet Van Dyne is, after all, her sort-of stepmother), and a can-do attitude that is invigorating.

Elsa Charretier matches that enthusiasm stroke-for-word, filling the pages of The Unstoppable Wasp #2 with great images, strong characters, and fun adventures, which include everything from an encounter with a landline telephone (largely played for laughs) to a giant rat and a proportional amount of bright green (thanks to colorist Megan Wilson) snot. Whitley peppers the tale with monolog from Nadia that letterer Joe Caramagna masterfully stacks in the best spots for optimal panel production, between, around, and next to a substantial amount of word balloons as Nadia verbally expresses nearly every thought she has about the world around her.

Among the captions Caramagna works with are “Nadia’s neat science facts,” which include such gems as “You create static electricity all day long as you move around the world,” and “Fire is hot. You shouldn’t put it out with your hands.” These are fun little bits thematically linked to the Silver Age Flash Facts from the Flash comic when Barry Allen was introduced. And that’s exactly the wide-eyed enthusiasm present in this comic.

Whitley’s story carries it (including making Jarvis a relatably humorous foil without turning him into an inept bumbler), Charretier’s art broadcasts it, Wilson’s colors amplify it, and Caramagna’s letters balance The Unstoppable Wasp #2.

Readers who have latched onto Patsy Walker, A.K.A. Hellcat, Squirrel Girl, Moon Girl & Devil Dinosaur, and Ms. Marvel are going to find another gem for their reading pile. Locked into the more balanced Marvel Universe that features a number of dynamic, female-led, creatively charged comics, The Unstoppable Wasp celebrates the Marvel Universe and science, not necessarily in equal measure, but certainly with equal enthusiasm.

The Marvel Cinematic Universe is propelling Hope Pym forward as the Wasp, which makes the decision to create – and feature – Nadia as the first Wasp to carry a solo title an interesting choice. And it really shouldn’t be any other way. Hope’s older, more seasoned, and certainly more cynical. Janet has given readers a rich, full history as an Avenger, including a stint as chairperson. Nadia offers potential to go in either of those directions, or both, or neither. Nadia is a refreshingly clean slate that continues Marvel’s celebration of legacy while also providing readers with a magnificent gateway character.

While this comic was written (and certainly pitched) before recent political developments, The Unstoppable Wasp has become the ultimate antibiotic comic book to a current administration that denies equality, science, and, well, optimism. In a week that has given us terms like “Rogue NASA” and concepts like silencing park rangers, The Unstoppable Wasp #2 is a breath of fresh air, a moral booster shot, and a smile on printed page.