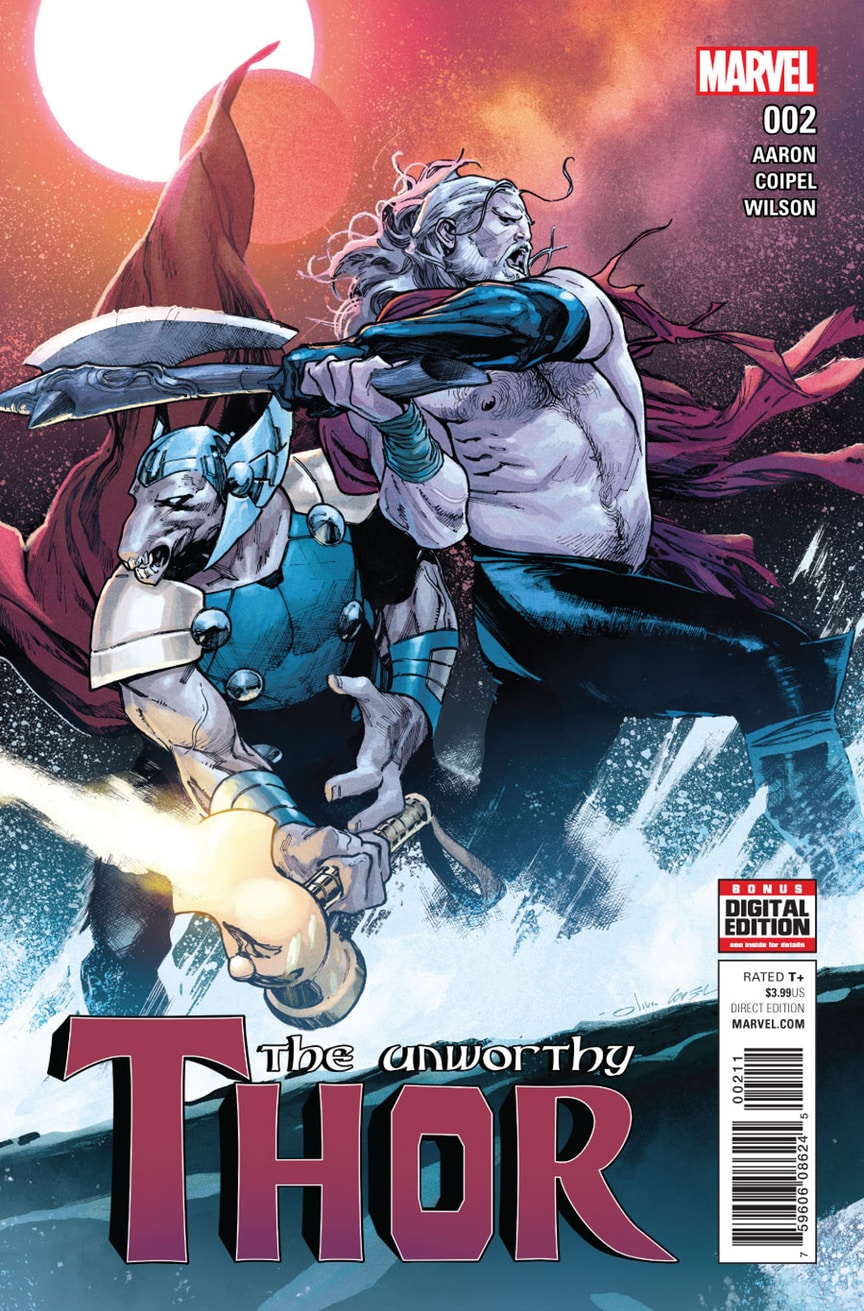 Thunderous action, Beta Ray Bill and a lame-ass villain made….un-lame? I’m not sure Jason Aaron, Olivier Coipel and Matt Wilson are even capable of making a bad comic at this point.

I’m not kidding when I say that. Aaron, Coipel and Wilson grabbed me with the first issue of this mini-series and had me hooked with that cliffhanger. The introduction of Beta Ray Bill into this story made it 50x more interesting and, by their hand, The Collector is more than a weirdo with a hoarding fetish. This team is selling this story by delivering top notch work and even though I am an ardent fan of Jane wielding the hammer, they’ve got me intrigued as to the going ons of the Odinson in his quest for worthiness.

Jason Aaron’s plotting is fantastic and he moves this issue along at a perfect pace. Odinson’s interactions with Beta Ray Bill are actually heartwarming, Bill’s pure heart shining through with every bit of dialogue. You can hear the bitterness and pain in every word Aaron has the Odinson utter and his quest for the new hammer is heartbreaking, in a way. Aaron has put this character through the ringer over the years and I can say with conviction that no writer has fully grasped what this character can be quite like Jason Aaron. He has fleshed out the good sides and the bad of the Odinson and this next chapter is brilliantly crafted.

Olivier Coipel takes the strong script and gives it thunderous life, capturing the emotional aspects just as well as the explosive action. His work is detailed, his layouts are flawless and there are pages that absolutely floored me in this issue. The bitterness and pain I mentioned earlier is present in the eyes of the Odinson at all points and Coipel does a great job of showing that while this man is still an Asgardian God, he’s emotionally broken and not the Thor we’ve known. This Thor is crushed by the burden of whatever those whispered words were, and his unworthiness is rocking him to his core. This character has changed and that is evident in Coipel’s fabulous pencil work.

Matt Wilson is an all-star colourist to put it mildly and he shows why in this issue. No matter who is penciling, Wilson is able to adjust to the style and elevate the work through his use of pitch perfect palettes. While The Mighty Thor has a more lighthearted and exuberant tone on the whole, Wilson embraces the darker edge of the Odinson and reflects that in this issue. His work is amazing…’nuff said.

The Unworthy Thor #2 is a fantastic second chapter in what is proving to be a brilliant mini-series thus far. The creative team brings the thunder, the misery and the pain of the unworthy Odinson in a way that has my full attention. I can’t wait for issue #3.