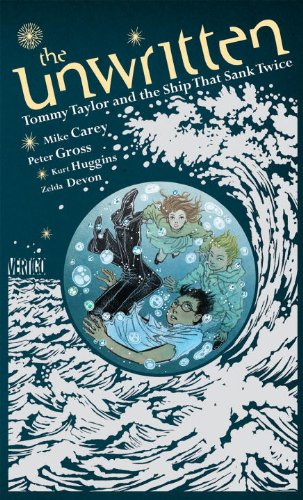 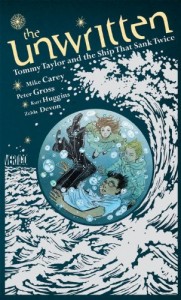 Carey, Gross and a crew of finishers bring readers into the world of Tommy Taylor in this Unwritten original graphic novel that does a fantastic job of acting as a one stop shop for getting acquainted with the series they have created.

Carey crafts an interesting story in this OGN, taking a well known archetype (in this case Harry Potter) and shaping it and the world into a very different thing. I’ll admit to rolling my eyes when archetypes were being discussed in the beginning of the book, but Carey and Gross certainly had me convinced by what they meant by the end. Carey bounces between two worlds in this OGN, the “real world” where the Tommy Taylor story is being written, and the story itself, brought to life for readers as it is being created. Both stories are intriguing and engrossing and Carey does an excellent job of switching between the two at just the right beats. As the story in the fantasy world builds and becomes more tense, we often shift back to the world of the writer, Wilson Taylor, and his young son (also named Tommy) with the shift in dramatic focus working to heighten both stories. Carey does well to not linger in either for an extreme amount of time, keeping both stories consistently important to the world of The Unwritten and this OGN itself, which is no easy feat. He very easily could have kept readers in the fantasy world for 95% of the book and had a decent story, but exiting to Wilson’s world provided a great pause and made me want to devour the fantasy world whenever we returned to it. Carey does a solid job throughout the book of keeping Tommy’s voice unique, while also staying true to the archetype. Rather than blowing the archetype out of the water and doing outrageous things that would be out of character, Carey changes very subtle and key details to create a unique personality that is recognizable as a variant of the archetype and not a direct ripoff. This is a very entertaining story Carey has cooked up in this graphic novel, and he does an excellent job of keeping it contained but also dangling a fantastic final page in front of readers to draw them into the world of The Unwritten.

Peter Gross’ line work throughout the OGN is solid, providing visuals that match the tone of the story perfectly and are easy on the eyes. The army of finishers (7 including Gross himself) does lead to some inconsistencies throughout the collection, but for the most part I noticed the work was divided along natural shifts between the written world and Wilson’s world. This made the changes less dramatic and less obvious and allowed a more cohesive reading experience, which was appreciated. With Gross providing pencils for the entire work it feels very rooted in the world of The Unwritten and this co-creators stamp remains on every piece of the world, which is fantastic. Gross’ world building is excellent in this collection and completely engrossing. His layouts are dynamic and easy on the eyes, never falling back on too many standards too often, which would have grown tedious as I read this OGN in a single sitting. The colour work by primary colourist Zelda Devon is very well done and the use of rich tones makes the written world feel very real and natural. There were a lot of hands working on the artwork for this collection and to have a work this cohesive considering the number of creators is very impressive.

Skilled creators put together a fantastic pair of stories in The Unwritten: Tommy Taylor & the Ship That Sank Twice, one that I highly recommend to anyone who enjoys the fantasy genre or anything remotely similar to Harry Potter. It is an excellent introduction to the world Carey & Gross have created, and a very solid read.