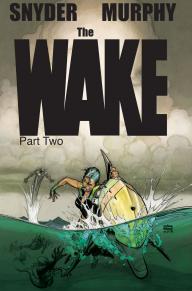 Leeward might be trapped with nowhere to go, but that doesn’t mean it’s the end of the line.

The adventures in the future take a slight detour to the past as more is revealed about the leading lady of the second half of this miniseries. Leeward’s memories provide insight into her end game and the signal that she is seeking to hunt-down. In what is little more than an opening vignette of clarification, Snyder’s story is played out in the emotional nuanced artwork by Murphy. Discovery, anticipation and finally fear play out as we learn just how early in life Leeward experiences loss. From there the dastardly plans of her captors are made clear while a surprising turn of events takes your breath away with action filled layouts and moments.

Murphy does a great job of creating images that feel as if they are more part of an epic adventure movie than just being read across a static page. Hollingsworth’s use of brighter pastels in the second half of this series reflects the fact that the action is happening above the water. It also provides more hope to mankind’s plight against the monsters they are fighting from below. If issue six was a set-up and exposition of the new world, created by monstrous flood, then issue seven is the Kraken-like attack the leaves you cheering. The adventure and horror comes to life from panel to panel as once again the sheer terror of what mankind is having to fight against becomes overwhelming… then hope is lost. Of course, as we have learned since issue five of this series, ends do not always mean things are completely over; sometimes they are just the beginning.

Some background knowledge from issue six is helpful in understanding the full impact of what is occurring; however it is not a necessity to enjoying the story. It’s more helpful to be familiar with the end of Part 1 of the series and Dr. Archer’s final moments than anything. Snyder and Murphy work together to create a masterful reveal at the end of this issue that will completely challenge what you believe is happening and scratching your head as to what is next. The Wake is an emotionally charged thriller with gasp-worthy moments, making you feel like you’re watching an epic on an IMAX screen.