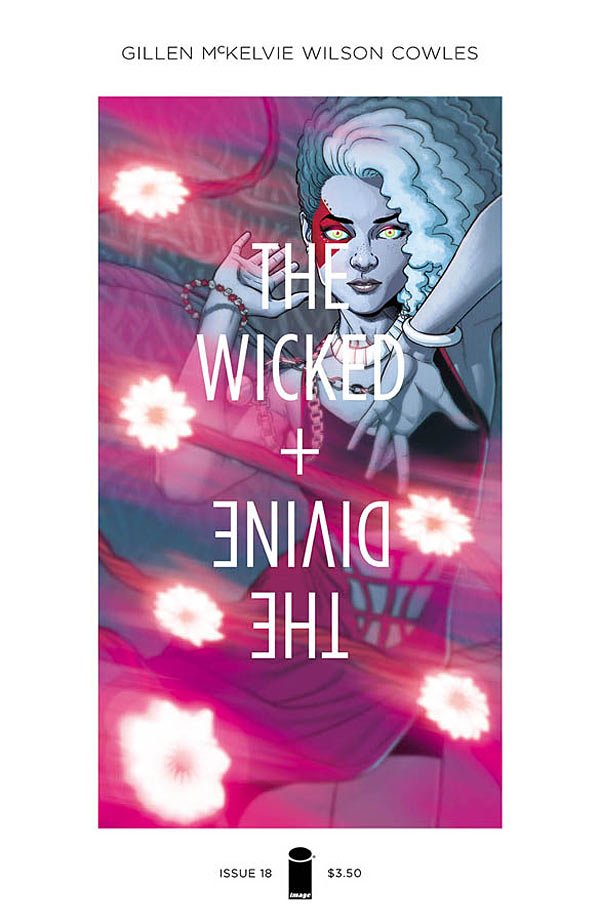 The Wicked + the Divine is back after a four month hiatus with its fourth arc, Rising Action, which the creators have billed as both a jumping-on point for new readers and a festival of punching and explosions. Does Issue 18 deliver?  Where do we stand after the carnage of Commercial Suicide? Spoilers in store, so be wary.

From the recap, its clear WicDiv has received a refreshing spa treatment. Gone is the Pantheon wheel, replaced with a new dual-column design running down each of the gods by powers and traits. This is probably helpful for new readers who need more than symbols to go by. It might also hint at a coming break in the cycle of rebirth and recurrence. That train of thought is further serviced by the first page: Persephone, aka Laura “nuh-uh” Wilson, standing in a dressing room, getting ready for her first gig. The presence of a 13th god certainly disrupts the 12-at-a-time, every 90 years cycle that Ananke has been curating since before time meant anything.

This opening page is actually my favorite of the entire issue, because it harkens back to issue one, and Laura dressed in cosplay for the Amaterasu concert, disappointed in the “almost goddess” she sees in the mirror. This Laura has leveled up, her god-mode absolute, her confidence unwavering. “Yeah, I’m ready.” Jamie McKelvie brings some excellent fashion sense to Persephone’s design, mixing death and flowers. I want to know where I can get a chainmail hoodie.

While Persephone is about to make her debut, we also check in over at Valhalla, getting what is our first full external shot of the Pantheon’s HQ. Does that side tower resemble some sort of weird Tron-penis to anyone else? Because if intentional, that’s so Woden.

Minerva is front and center for a little while, which is a welcome change – she didn’t get a spotlight issue during Commercial Suicide, and in general we see the least of her. Her “goddess of wisdom” status keeps coming up, and indicates she has a bigger role to play in the coming action.

I would like to personally thank both Mr. McKelvie and Matt Wilson for the presentation of Persephone’s abs when she takes the stage. Her first gig is certainly a First Gig – there’s weird mystery, a small crowd, and the power of social media as myth-builder. Every time we see what the audience sees/hears/”feels” during a god’s performance, it serves as a great window into not just the god’s powers, but the person the god used to be.

Once Ananke shows up, my enjoyment of the issue fades a little. From her line “Nip this evil flower in its bud” to her insistence that Baal and Amaterasu stay behind, she’s gone from Senator Palpatine to the Emperor – her malevolence is almost cartoonish. It makes it hard to believe that the gods – someone like Baal especially – wouldn’t notice that she’s being very shifty and suspicious and maybe isn’t always telling the truth. I’m unclear if the group knows how much Ananke relies on Woden; since they seem to universally hate Woden, it seems like that might be a red flag? Baal once again demonstrates a weird sort of dumbness when he seems to completely ignore Minerva’s presence – he’s been protective of Mini in the past.

I could have read an entire issue of Baal beating up Baphomet. After injecting so much of his own background into Baphomet’s solo issue (beautifully, goth-ily rendered by Leila del Duca), I wonder if this isn’t Kieron Gillen having a little fun at his own expense.

Eventually, the family comes together, in a scene that might be straight out of Phonogram for the indie-club dance feel. It’s great to see Persephone in full effect, and yet so much of her old self remains, including her cracked iPhone. Then we get a nice big bomb drop – oh Laura, honey, why? – and the issue swaggers out with some LL Cool J.

So…did the issue deliver? For punches and explosive action, most definitely. McKelvie and Wilson illustrate moments small and large in a variety of sets, linking the sneaking around at Valhalla with the Coming Out at Persephone’s show into a chaotic jailbreak. Particularly fun moments in the art include Laura’s flashbacks to her parent’s death – including blood-soaked Ananke – and a moth casting a shadow. The small touches are always as important to the look of this book as the big stuff.

But is it a jumping on point? I have to say no. Gillen scripted the issue with enough context clues to fill you in on what’s going on; between the script and the recap you could more or less follow the action. But I’m not sure some of the big emotional beats – Laura’s growth, Baal and Baphomet’s fight – have the same resonance if you’ve not actually been reading the story? I don’t think I would hand this issue to someone as a “try this and see if you like it” issue. It’s still a great issue, and after three solid volumes of Gillen & co. breaking readers’ hearts, it’s very nice to see some sweet, ass-kicking revenge go down. The new “Pantheon Divided” paradigm is ripe for drama and more punching, and the cast is all growing in different directions, in most cases beyond their original “archetype.” The best thing about The Wicked + the Divine is that’s it is the comics equivalent of a mix-CD each volume; this volume is clearly the Pump-Up track collection.