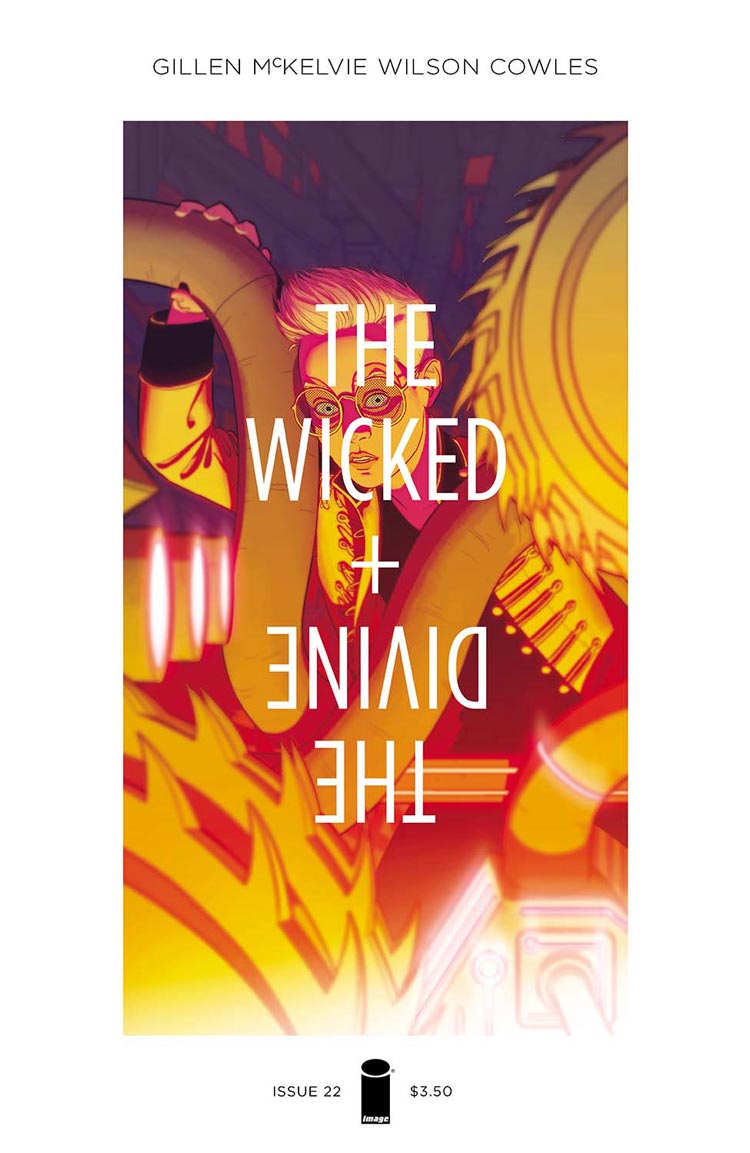 It’s been a long time coming…

The rebellious young gods battle against Woden’s Valkyrie masterpiece as Amaterasu recruits Urd to their cause. Woden has truly claimed his side as the other gods begin their assault on Ananke. The remaining Pantheon members deliberate over how to move forward after Laura makes a snap decision, averting one crisis for a potential other.

Even after reading this series, it never dawned on me how young the Pantheon is. Such a factor seems to influence Ananke’s own actions, as though she is essentially babysitting a group of individuals with nigh-omnipotence. The Wicked + The Divine #22 seems to capture the emotions, passion, and impetuousness of youth, all embroiled in lies and deceit from the one who was supposed to care for them. I wonder if this comic is almost or fully a message of what it’s like to live in a world that distrusts you, in one which the people meant to be your caregivers are the ones who do not feel it worth it to make you privy to the truth.

Kireon Gillen’s characters are certainly their own through the issue, even if we see changes of heart in particularly dicey moments. Each of the Pantheon makes decisions that are a natural consequence of their role in the installments before. My only issue is the sudden surge of morality and the dialogue. Both of these elements in the story felt somewhat out of place, though they did not take away from the overall story. Gillen’s ability to express youthful defiance is not to be glossed over, and each of the major characters have their own motivations that work within the context of the story. However, while I feel their actions match the stakes, the changes were both interesting and more abrupt than I expected.

Jamie McKelvie’s artistic talents help this issue to shine. I like the subtle shifts in emotions within each character and scene, but also the emphasis on action in the first half of the issue. McKelvie has a knack for diversity of imagery, which helps to tell the tale of gods who would defy odds and their own mortal deadlines. Matthew Wilson mirrors Gillen’s portrayal of young people through vibrant and poppy colors.

I certainly admire the brilliance of the images within the first few pages, but it’s the last ones that really catch me. The deeply read and evocative hues nearly blend each of the images, separated by bright green manifestations of Persephone’s miracles. I feel like Wilson expresses urgency and the dire circumstances of the Pantheon through these colors, which make this story feel as though it hasn’t truly ended, despite being the final chapter in a long story.

The Wicked + The Divine #22 is exactly what you’d expect from this series if you’ve kept up. Despite my own issues with some of the story elements, it definitely holds up in the context of the rest of this tale and provides an ending that is shocking and unsettling, refusing to let readers go with a sense of calm and comfort. Many important themes, like youth, defiance, and independence, rise within this issue and encapsulate the larger experience of the series to this defining point. You definitely want to see how this ends.