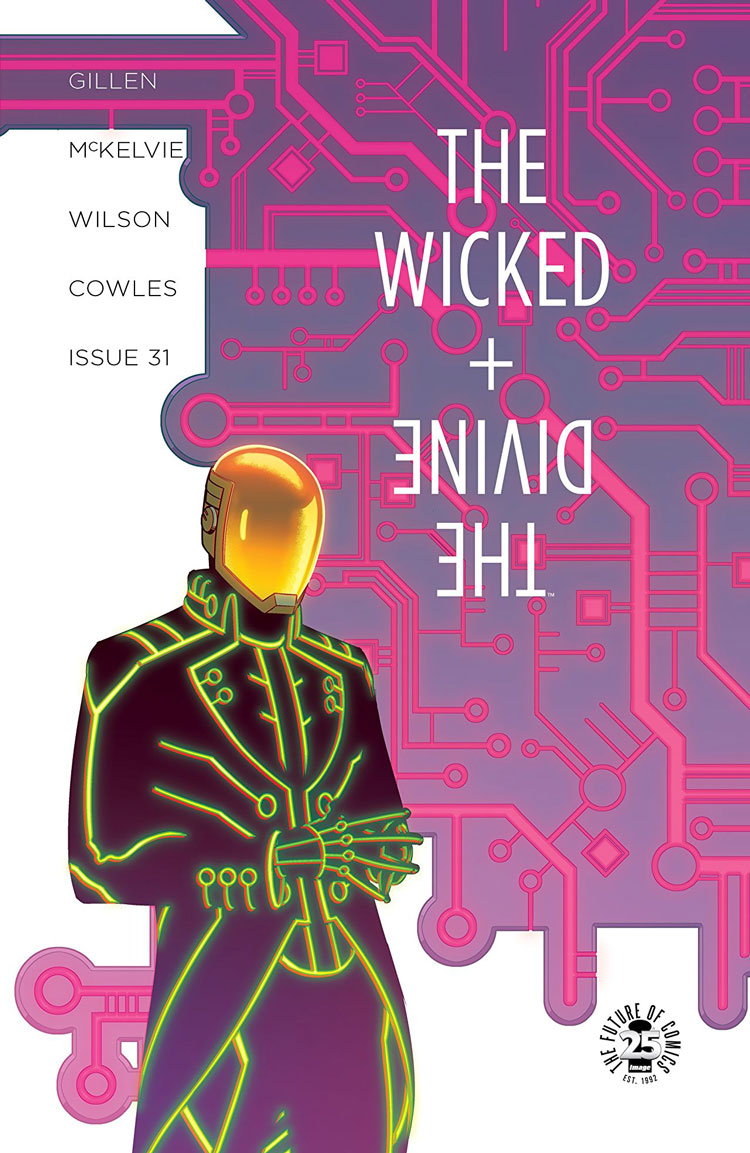 Written by Kieron Gillen and illustrated by Jamie McKelvie, what started as a story about divinity and pop star worship spiraled into a tale about poorly adjusted deities driven by sex and anarchy, with a painful dash of humanity thrown in. If you haven’t been following along until this point, I highly suggest you start.

Up until the point of this issue, a lot has happened. Cassandra (aka the Norn), Dionysus, and Woden have been building to the ultimate hive-mind rave in order to discover the true purpose of the machine Ananke had Woden build. Finally, the night has come, and the hive-mind commences with the untrustworthy Woden at the of the machine.

Sakhmet has been hiding with Persephone in the Underworld, but they can’t stay down there forever. After she leaves for a stroll, the other gods are ready to confront her. All the while, the Great Darkness lingers, ready to destroy the world.

The Wicked + The Divine is one of those series that has never failed to shock the reader with twists, turns, and character deaths. Since this issue hits the climax of an arc, its chock full of all three.

The main theme of this issue is betrayal. Gillen’s characterization expertly hits the erratic and unpredictable nature of young people, hurt people, and the horrifying consequences of giving those kinds unlimited powers. Much as the gods of ancient mythologies are violent and vengeful, they were all too human in their flaws.

Gillen takes this humanity beyond base impulse and adds selfishness, guilt, and the inability to overcome your past. Despite what they’ve become, these characters are incapable of overcoming the human experience which has shaped them. By adding this element, our characters’ motivations feel real. This issue is filled with the Pantheon doing horrible things to each other, but each character is so expertly put together that while you’re shocked, nothing feels out of sync with the story.

As always, the art in The Wicked + The Divine is otherworldly. The characters pop out from electric graphic backgrounds, the emphasis placed on their facial expressions (or lack thereof in Woden’s case) to play up the intensity of the dialogue. Wilson’s coloring is always exceptional.

Wilson and McKelvie’s union of linework and color are at their best in the rave scenes, and this issue gives us the biggest rave of them all. Furthermore, a scene in the British Museum allows for McKelvie to have lots of fun with symbolism, whether it be the Ancient Egyptian statues or a shocking scene that ends with Amaterasu’s red sun.

This issue violently thrust the story forward, and was both highly satisfying and totally horrifying. Any The Wicked + The Divine fan will likely finish this issue screaming “no” but thinking “gods what will happen next??” Expertly written and illustrated, this definitely feels like a shocking yet completely earned turning point which will leave you on your knees.