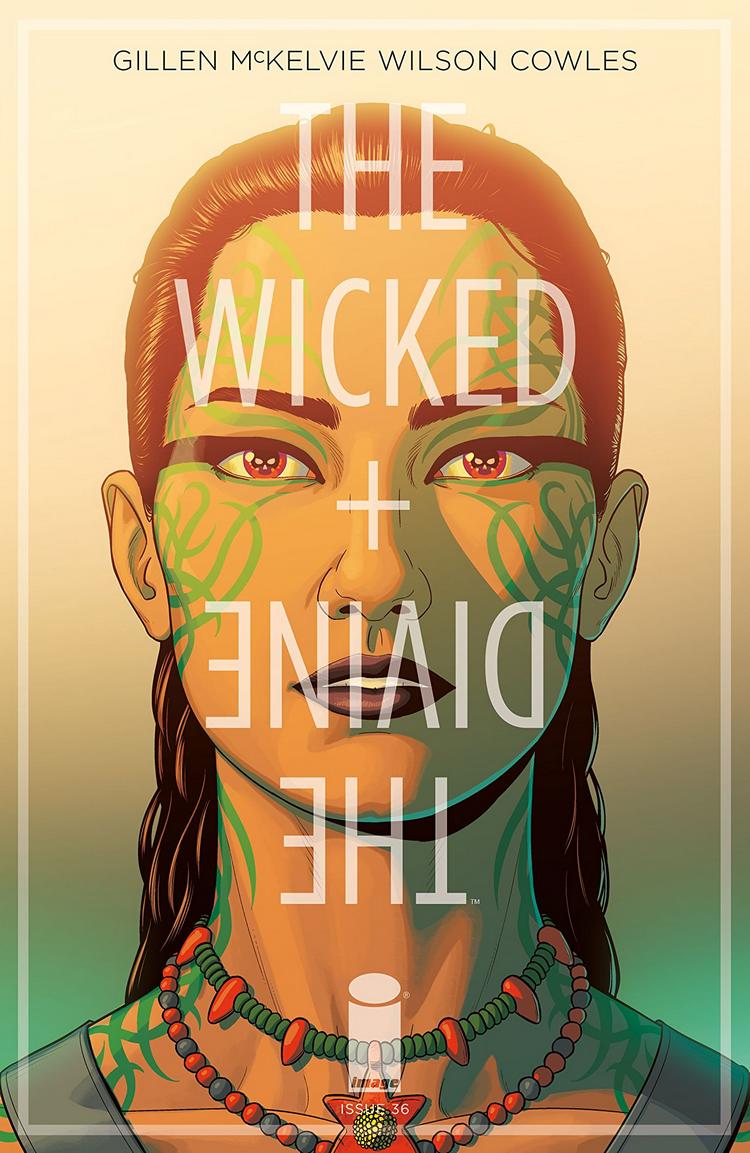 The history of Persephone throughout history is revealed alongside the confession of Baal in an issue that drags it’s feet and takes its sweet time to savor in the showcasing the history of God killings and the secret history of the Baal.

From the beginning, we’re treated to a familiar scene of Persephone and Anake once again being reunited and the Persephone about to utilize her gift to sing. What follows is ten pages of McKelvie drawing both God’s throughout every time period that the Recurrence occurs up to 2014. Ten pages of the same act happening differently depending on which Persephone was lucky enough to survive, kill her, or be embraced with a hug. This is one of the main problems with this issue, ten pages dedicated to highlighting the history of the travesty of the Gods would be alright and suitable if the creative team was giving us something fresh and moving the story along. McKelvie’s pencils get to add versatility through the trek across time periods with accurately detailed designs and Wilson provides the colors for every square sized panel as easy as can be. Across the ten pages, we’re treated to the same act that Anake has done across a lot of centuries from Egypt to North America to China. It’s essentially taking the two Gods, Anake and Persephone and placing them in different backgrounds, changing their very historically accurate clothes, and placing them in a new background with some different poses. Wilson’s colors have a constant for most of the Persephone’s through the years with the commonly used sound effect in The Wicked + The Divine *KLLK* from Cowles, accompanied with the colorful red and orange head explosion if that specific historical God meeting calls for it. The colors of each locations outfit, backgrounds, and the occasional action all benefit each other to the fullest extent.

The next half of the book is dedicated to the present and the clear and present danger of Baal’s true role as a God. Wilson bathes the present moment between Baal and Laura in a red filter, similar to how the flashback issues of a specific God were presented. Cowles letter are sprinkled across the page for a subtle narration from Baal and McKelvie keeps up the great work with the character expressions and really expressing how these God’s are feeling at the moment and are perceived. It’s emotionally paired with Gillen writing a tragic tale about Baal’s true nature that brings it home back to the ongoing story of The Great Darkness and the current crisis of self that most of these God’s are going through in their own way. Gillen keeps this specific issue a strictly Persephone and Baal character story with a few bombshells to spare for the ex(?) lovers. The firey reds from Wilson settle Baal into his more suited status now that we know the truth and Gillen capture his secret reveals with the emotion and voice we’ve grown accustomed to with the God. Three pages of minimal dialogue surrounded by fire and red from Baal drive the point of the darkness that he’s had to deal with, making the events of late and his motivations in the story a lot harder to swallow but necessary given the threat.

The Wicked + The Divine eats up a lot of space with this issue where only the second part gets it on course again. The complete history of Persephone is great to see how, when, and where the God’s have set up shop across history but ten pages dedicated to it wastes pages that could be used elsewhere and move the plot along. The pages dedicated to Persephone aside, it’s another curious chapter of The Wicked + The Divine that answers questions, presents more, complicates the situation into another knot, and looks great and puts the characters first while doing it.