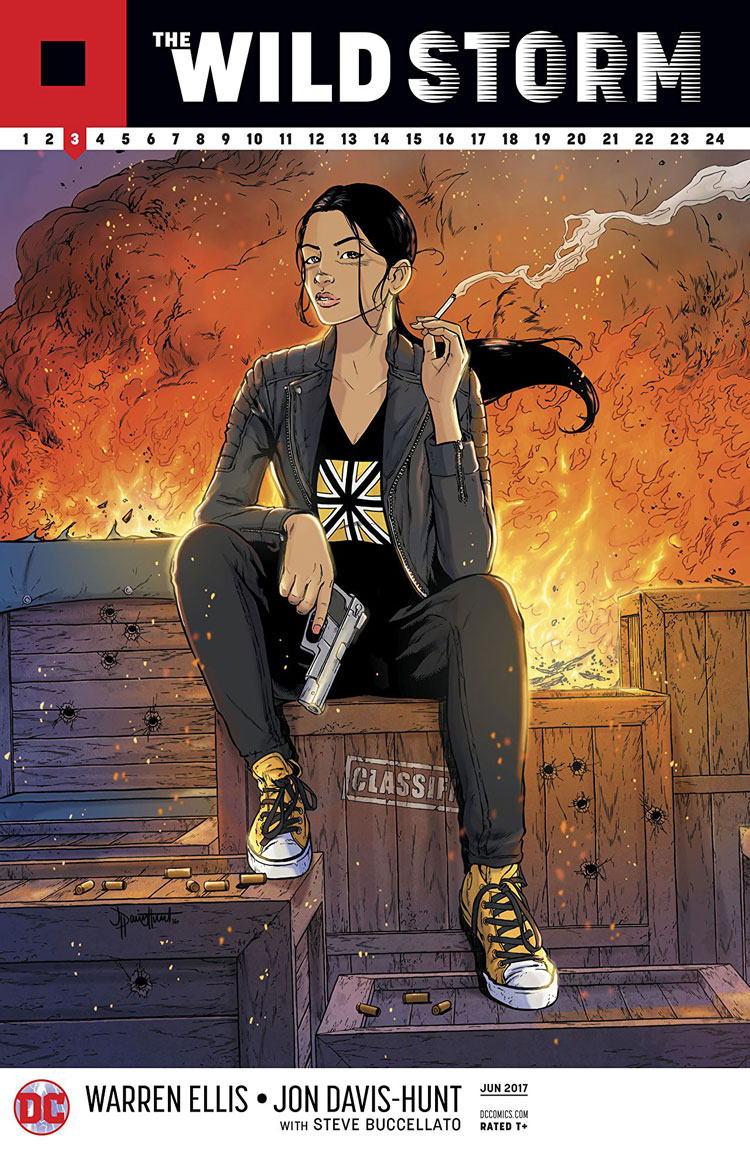 Angie Spica’s life takes a new turn as she becomes sought after by not only three strangers but the company whose tech she stole. Before she has time to fully process people teleporting into her living room, an explosive exchange allows her to utilize more of her talents and further drive her into a world with new twists and turns.

On the whole, the plot moves rather quickly, but Warren Ellis places enough to chew on. We get a glimpse of Angie’s actions and how they affect her, as well as the quick emergence of a threat. Ellis peers into Angie’s personality, creating the conflict of her responsibilities as an employee and her behavior against the company overshadowing her. The bombastic conflict of this issue offers intrigue about and insight into the clandestine moves of Angie’s rescuers and her would be captors.

Jon Davis-Hunt takes hold of oddities and espionage. The mix of the odd with the mundane, seen through technology and strange bodies, creates an atmosphere within the story that points to an uncertain but weirdly attractive future. The slow narrative build is accompanied by Davis-Hunt’s talent, lending toward the deliberate reveal of worlds beyond the reader and Angie’s own imaginations.

With Steve Buccellato on colors, the world of The Wild Storm defies expectation through the seemingly normal scenes ensconced by otherworldly themes. I like the care that Buccellato puts into creating a contrast between Angie’s relatively ordinary life and the parts of her world that start to collide. Even though she’s building an intricate and astounding piece of armor, there are parts of her existence that fit the same mold that many of our lives do. From the realistic notes of color in office life to the bright manifestation of teleportation, Buccellato helps move the issue from one reminiscent of the drudgery of work to the fantastical elements that mark Angie’s adventure.

If you’re a fan of these long lost characters, I think The Wild Storm #3 will give you what you’re looking for. New readers, though, may have a slightly different experience. There’s a distant vision that is slowly being enacted, which is helping to build the drama and tension of this crew of characters. With that in mind, the pacing may feel slightly off in this series’ third issue, but there’s still enough to pique curiosity.