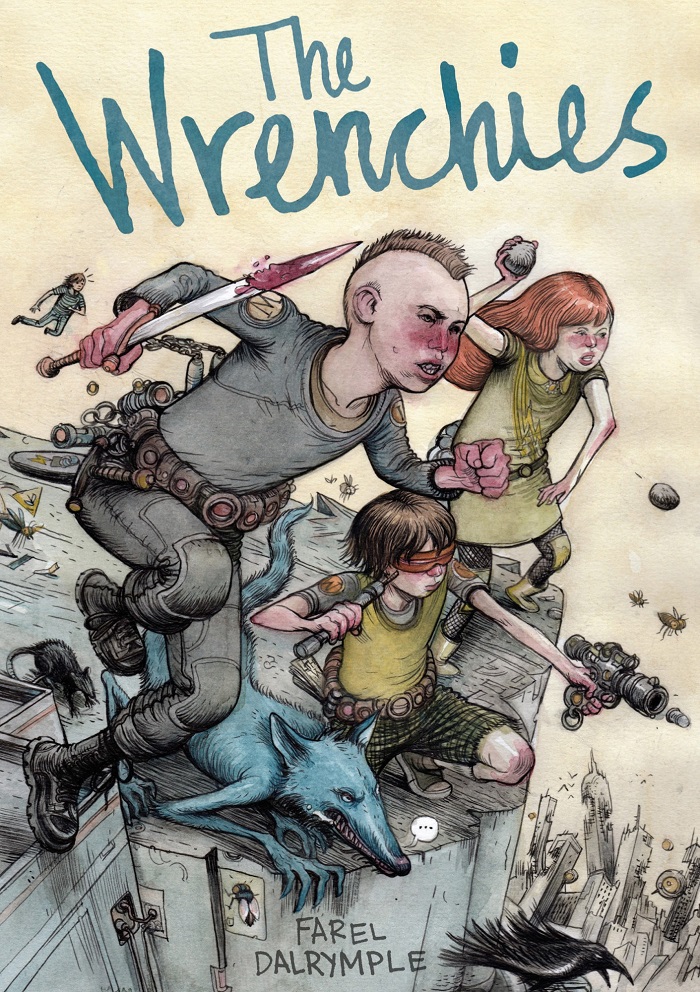 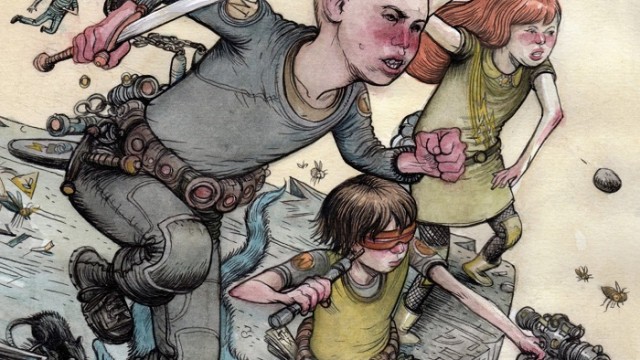 Meet the Wrenchies. They’re strong, powerful, and if you cross them, things will quickly go very badly for you. Only one thing scares them-growing up. Anyone who survives to be an adult lives in constant fear of the Shadowsmen. All the teenagers who come into contact with them turn into twisted, nightmarish monsters whose minds are lost forever.

The Wrenchies is more of a map than a graphic novel.

Ok, it’s definitely a graphic novel, too. Coming this September from First Second Books, The Wrenchies by Farel Dalrymple centers around the titular gang of teenagers fighting against the evil Shadowsmen, who, according to the book’s solicit, turn people “into twisted, nightmarish monsters whose minds are lost forever.”

To me, this plot set up is a vehicle for the exploration of this crazy world that pours out of every page, every panel, every line. Returning to my opening statement, this book at times appears like a map for this distorted world, and the Wrenchies are just navigating the reader through it all. On more than one occasion the plot seemed like it was taking twists and turns to show us more of the world around the characters, rather than actually driving us forward in the story (this doesn’t mean the story itself didn’t have high points though).

Like all good maps, the detail in illustrating the location is of critical importance. This is one of the places where I find Farel’s art really shines. Whether we’re looking at a giant room, a cluttered bunker, or a decimated wasteland, every single page and panel is saturated with detail that builds upon the atmosphere of our adventure. In some instances the setting and scene might have benefited from lighter colors to really let the black line work shine through, but having seen the original pages I now know this more of a printing factor than Farel’s choice of colors.

The characters themselves do not lack artist detail either, and each character benefits from an arresting appearance that represents elements of their personality. Hollis, one of the book’s main protagonists, is a prime example of a frumpy, awkward character that acts equally frumpy and awkward. Other characters such as the Wrenchies themselves look badass and fully equipped to handle a post-global meltdown world, while the Shadowsmen and their minions look properly evil and gross. This styling led me to think during multiple fight scenes, “Ugh, smash that thing! Kill it!”

One thing that some readers may find difficult in reading The Wrenchies is that this journey, the map we’re exploring, is far from linear. There are numerous space and time leaps for both the characters and the reader, as well as characters that experience past, present, and future versions of themselves along the way. Because of these time jumps, I found that there are scenes near the end of the book that I would have found immensely helpful to know at the beginning of the book, and parts at the beginning of the book that I needed to reread for more context at the end. Is this a bad thing? After sitting on it for a while, I’m going to conclude that no, this is not a bad thing. It’s not the smoothest ride for the reader, but ultimately it builds upon the mood and book reading experience. Like some of my other favorite comics, a full reread will definitely help here.

The weakest point across my reading of The Wrenchies was characterization for the gang members themselves, which is a challenge given the relatively large cast of characters. For some, I didn’t feel like I knew them at all beyond their names and main trait (often a weapon or specialized skill). Other characters, such as The Scientist, played a large role but were left as a relative mystery; I wonder if this was intentional. The main exceptions are our two main protagonists, Hollis and Sherwood. We get a deep look into both of their lives, and Hollis is a character I particularly connected with. The moments where he overcomes his “awkward nerdy kid” status are especially gratifying. If you like Hollis, I highly recommend checking out Farel’s book Delusional, which features more adventures of him at home.

If you were expecting this book to be like The Goonies with a bunch of teens and their adventures, you might be disappointed. Or pleasantly surprised about how different it is. Everything in this book is unusual, and this is one of its strongest selling points – I can’t stress enough how important an open mind and ability to go with the flow is here. I won’t be surprised if this book ends up being controversial in its storytelling approach, but whether or not it’s to your tastes it should make you think about comics in a new way. Question what you know how a comic should tell a story, and trust me to know it all comes together in its own unique way. Like me, feel free to give it a reread for deeper meaning. And if you still can’t connect with it… at least there’s that damn great art to look at.