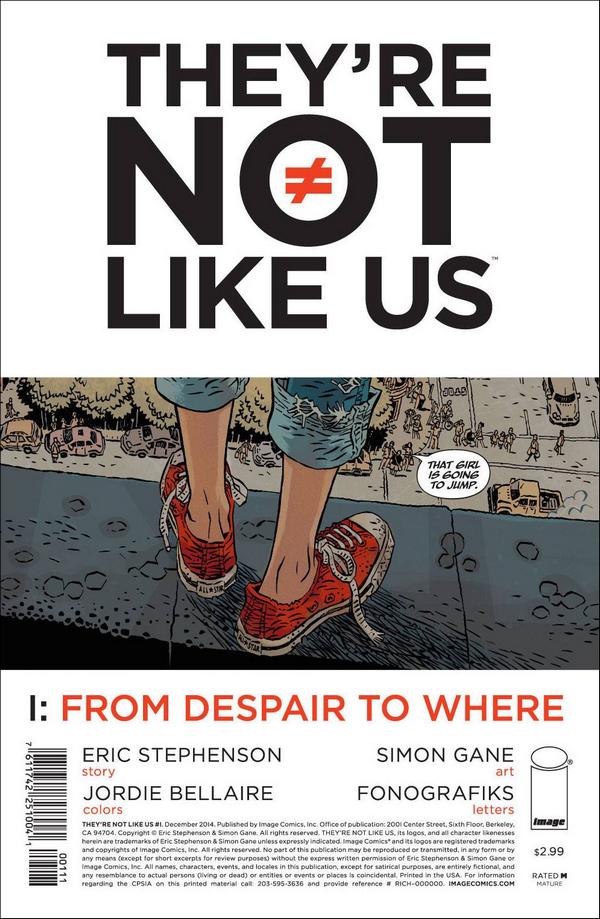 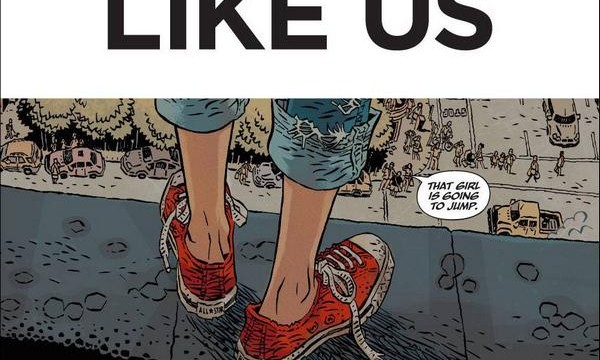 THEY’RE NOT LIKE US #1
Written by Eric Stephenson
Art by Simon Gane
Published by Image Comics
Release Date: December 24, 2014

This is a story of a young woman who cannot deal with the special powers she’s been given and the mysterious stranger who helps her realize she’s not crazy, but gifted. Perhaps that’s the problem, one all too familiar scene after another.

Right up front, the lead of this book is a melodramatic childlike woman who garners little to no sympathy. She apparently has little to no ability to reason and figure out or have theories of what is happening to her. Instead she needs a cliche mystery man to put all the puzzle pieces together for her. Instead of using straight, upfront language this man speaks in run-on one liners… not because he is forced to, but just because that makes him more of a hot shot for the basis of the story.  It feels like a bad cop show where they decide to only bark orders and fail to recognize other people have cognitive reasoning skills.

The male lead, confusingly code named The Voice, is an arrogant work of strung together cliches. The female lead, Sydney, is more than just naive and seems to lack logic, speaking more like an afternoon television special.

Simone Gane’s art is a highlight of the story. The action scenes feel awkward and uncomfortable, as violence should. Important story moments, such as the introduction of “the family” show care, composition and beauty. There is a clear distinction between each character physically to align with their unique gifts. The other shining art star is the house which Syd is brought too live. There is a fine level of detail inside and outside that helps it to feel like a character unto itself that could hold some magical property… until the storyline unceremoniously gives away how the home was acquired. There lies the biggest problem with this story. Instead of being rescued and taken to a place where she could feel loved or safe, Syd finds herself more as a captive being held by narcissist inotepad of receiving an invitation from a realistic “Xavier’s School for Gifted Youngsters.”

There is zero doubt this antagonistic, selfish approach is on purpose. It is supposed to run as a commentary on a generation. However, it feels like two dimensional character structure. It runs parallel to many popular teen television shows, much in the vein of a formulaic pilot episode for the CW Network. Given more issues and a chance for more plot twists and things could change in this story about young people with gifts. However, with series like Jupiter’s Legacy and The Wicked + The Divine providing multiple layers of story telling, the need for a more unique point of view will need to show itself very quickly. If you enjoy single stories, without anything below the surface or complicated, this issue is for you. For others, it’s still a wait and see what happens.

Jessica Boyd
Tags Eric Stephenson, Image Comics, Simon Gane, They're Not Like Us