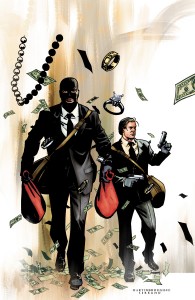 When I read issue #1 of Thief of Thieves, I had been only so-so on the book until the final page twist. That cliffhanger gets teased further as Nick Spencer tells stories in two time periods, a theft in the past, and an uncomfortable dinner in the present. Spencer has set up a good balance by using these two thematically-tied stories, one fulfills the action component while the other expands on Redmond and what led him to abandon the career he has built. Both tell us a lot about Redmond while not feeling like an exposition swamp. Even though the story is very focused on Redmond, the choice to not have a narration keeps him distant from the reader. We do no get any more idea of his motivations than Spencer wants us to have.

Spencer and Shawn Martinbrough don’t waste a moment in this book. The dialogue is tight and the art flows smoothly in very open page layouts. The first page of nearly static images conveyed so much in its simplicity. A lot of story is carried in very few panels. Only one splash page, but no page that tops 5 panels. Martinbrough has a very filmic style that is perfect for the book. He stays close on character’s faces, even during action scenes, another cue that this is a book about characters, not the situation.

After a first issue that seemed a bit formulaic, issue 2 has made a hard left turn into a different story of a man full of regrets. I expect we’ll still see the action of his old jobs for a bit, but it is all in service of developing Redmond as a character both now and then. I can easily see Kirkman’s name turning up on a TV or movie screen again attached to this book.