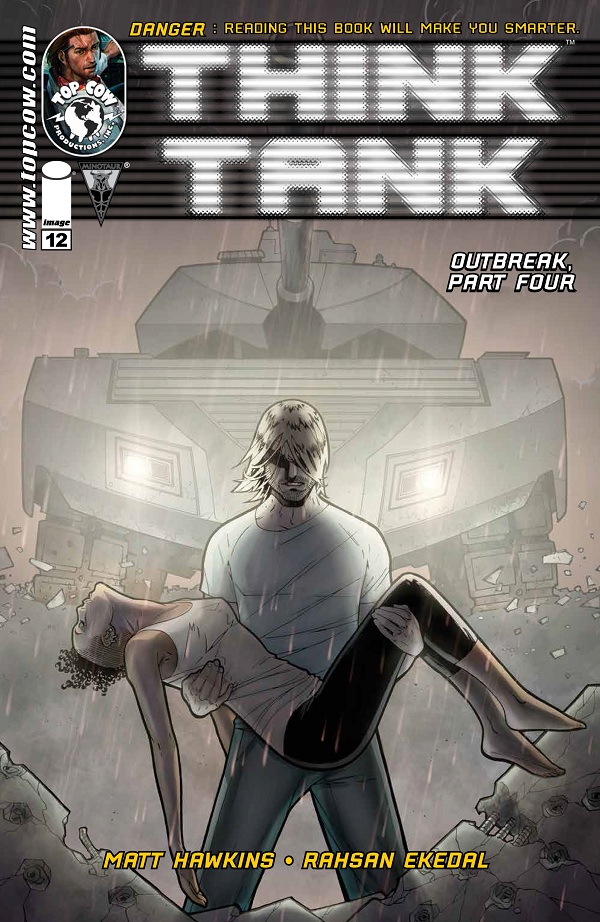 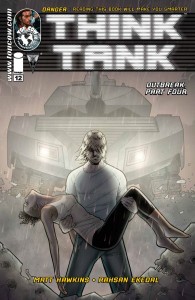 David Loren – an oft-obnoxious genius known for hiding beneath a never-serious exterior and his saucy custom t-shirts – stands at the epicenter of what will likely blow out to become World War III, his scientific breakthroughs used to spread death and chaos he’ll soon be blamed for directly – if he doesn’t die – while his once-girlfriend is held captive as bait. It’s a the-world-needs-to-be-saved kind of issue with only one man who might know how, but no one person can save the world.

Hawkins and Ekedal are a match made in any comic reader’s heaven. It’s unfortunate that this issue is the abrupt – albeit temporary – end of such an all-around excellent book, because it feels like Hawkins is forced to cram too much in while Ekedal’s work remains consistently amazing.

Hawkins delivers a white-knuckled ride, but unfortunately part of the reason for white-knuckling is the forced speed of its pacing, sweeping the audience through the story’s climax, the subsequent stalled-out  weeks, and the cuddly resolution in a matter of pages. And while he uses Loren’s inner monologue well for justifying various hard-to-believables in the issue, the break-neck pace shoves too many at the reader in a quick succession. But despite the uncomfortable pacing, there’s no lack of satisfaction: the science involved is as well-explained as always, and the issue is bursting with suspense, intentional frustration and anxiety, and gooey warmth with enough unsettled fear that it’s a bittersweet end. Hawkins ties most of his loose threads, but it’s the subsequent braid that will have readers pondering content of the upcoming relaunch until it’s released.

Ekedal seems to have no weaknesses, tackling the fast pace and quick change of tone without stumbling. From scores of vomiting, disease-riddled scientists collapsing all over the place to warm snuggles in bed, he evokes powerful visuals delivered through expertly-cut panels and camera angles, vivid expressions and consistently flawless backgrounds drawing the reader so deeply into the story they’ll be tempted to reach to turn the volume down every time someone shouts. His thick outlines, lovely grayscale coloring, and skill in drawing eye focus make the book gorgeous from first glance through last lingering look. He can also draw great profile shots of cute butts, which is always a welcome ability in the world of comics. If the characters he draws smile, it’s infectious enough for readers to smile with them; it’s that life he imbues in his work that makes it truly fantastic.

Think Tank will be back to captivate readers and make them smarter with every page they turn, charming them with a great cast and amazing story and sustaining them with a well-explained look at the science that builds and shapes the world around them. It just needs you to pick it up.