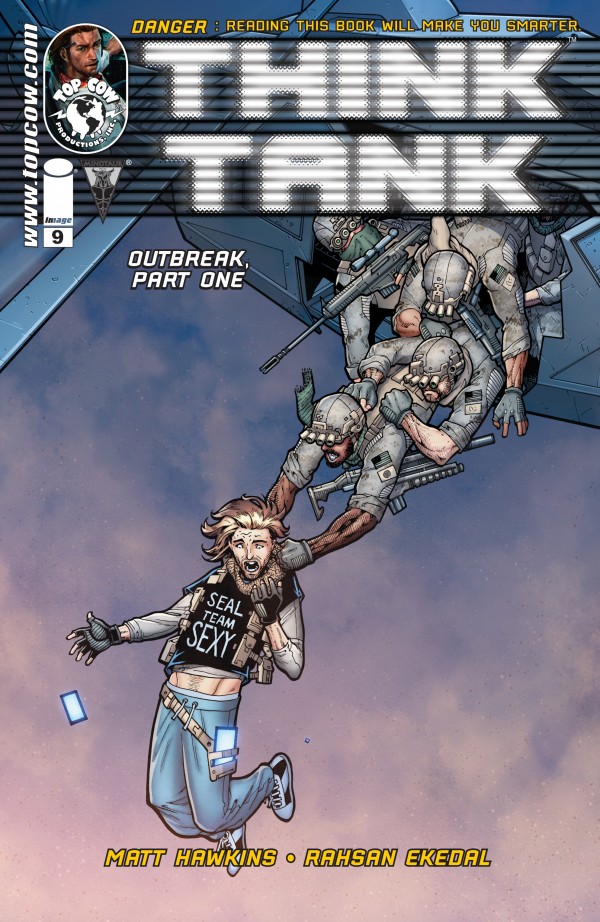 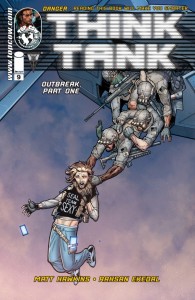 In Dr. David Loren’s line of work, you can’t just have a change of heart and look for a new career. You also can’t just thwart your highly trained and highly ambitious military colleagues, escape a secure government facility, flee the country and live out your days with your first real girlfriend. But you can be the protagonist of what is arguably one of the best comics out this month, capable of not just captivating readers with its story but with its truly intriguing showcase of modern science as well.

For readers who have been missing out on this title, #9 offers up a great summary of the book as David miserably narrates recent events in his life and where he’s going next. The narration continues throughout the issue, and as usual Hawkins makes good use of it by fleshing out David’s perception of his environment and himself, as well as elaborating on military and science trivia. As a result, even the most out-of-the-loop reader feels entirely comfortable with what’s going on. He uses both conversation and a dream sequence in the same way, leaving no rock in David’s world unturned for the reader’s benefit. Yet despite this dutiful rehashing, the issue keeps the story rolling at full steam, dragging David from his stagnant lab setting and throwing him out to face the realities of war and his own creations. It’s an intriguing change-up that Hawkins presents through shuffled timeframe scenes to deliver the story one chunk at a time, and ends it on an intentionally head-scratching cliffhanger that puts the reader on edge.

As the title has progressed, so too has Ekedal’s art. In this issue his execution is at an all-time high, delivering strong visuals with a combination of fantastic backgrounds, camera choices, and scene progression. The issue’s atmosphere is well-suited for Ekedal’s grayscales, which look gorgeous when rain-streaked and set a dark tone during a military debriefing. He again displays his knack for making every character look truly unique, carefully detailing age and race, relying on his lines to tell who a character is since he can’t lean as heavily on color. His expression and body language work is also solid, which was especially crucial in this issue as the story moves quickly and needed the consistent connection between David’s narration and his expression to keep the two on the same track.

Think Tank’s grayscaled colors and shadowing are lovely in a normal issue, but they’re particularly great in this issue’s forest setting, with foliage, fire, smoke, and rain all awash in blacks, silvers, and grays. And the bright absence of these darker shades in David’s dream do an excellent job of alienating the scene from the rest of the issue.

The book continues to set itself apart with its detailed Science Class column at the end of each issue, further detailing the real world science and military implements used in the book. This issue’s column includes discussion of Hawkins’s research techniques, electronic counter-measures, and the Blackhawk Sikorsky. Hawkins also addresses some of the reader buzz about his political affiliations. This combination of education and personal touch makes the back of the book just as engaging as the story itself, and with links provided for readers to seek out more information for themselves, it builds a very strong bond between creator and audience that few other books can boast.

Think Tank is an excellent book and can keep the attention of even those lacking in interest in the military or comprehension of the world of science, and for a title that founds itself on both, that’s high praise. Hawkins’s investment in research and application of his findings, and Ekedal’s unique art style and use of gorgeous grayscales, sets this book apart and above. If you’re not reading it already, pick up #9 and give the title a chance — and inevitably going back and reading the first eight issues as well when you get hooked.