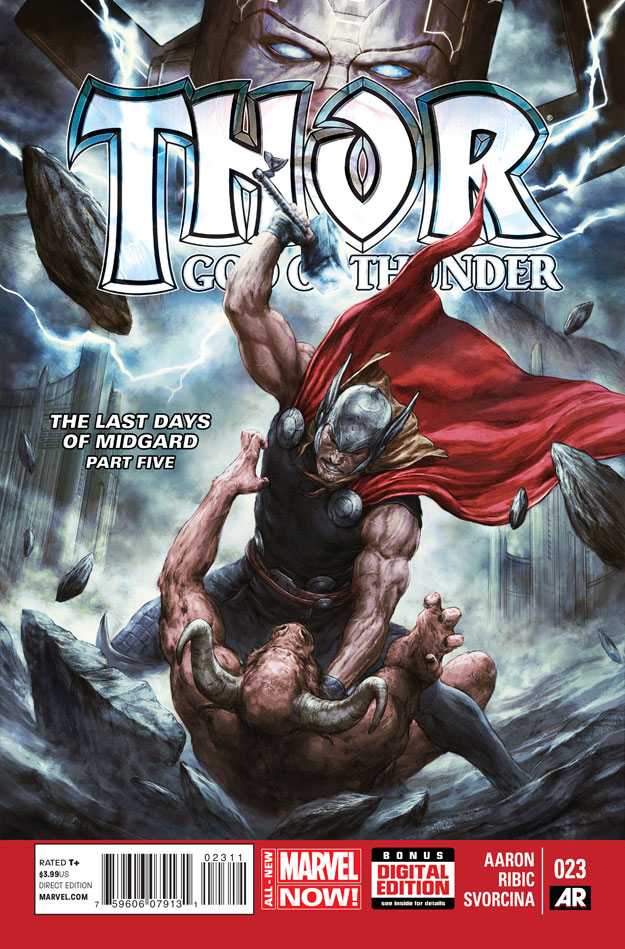 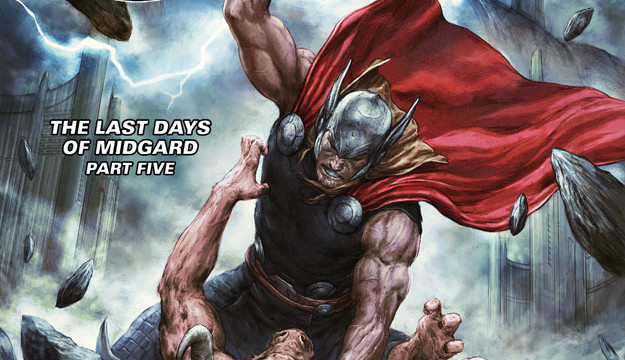 KRAKATHOOM! The titanic battles set up in previous issues come to a head in the fifth part of The Last Days of Midgard, an arc that will go down in history as being one of the best Thor stories ever.

Jason Aaron is 23 issues into what can only be described as a legendary run on Thor so far. Since the character’s resurrection by JMS in 2007, no writer has captured the thunder and “proud warrior” nature of Thor quite like Jason Aaron has. This is on full display in issue #23 as present day Thor fights to liberate Broxton from the clutches of Roxxon and King Thor goes to unthinkable lengths to save Midgard from the force-of-nature Galactus. Both of these storylines have been building for four issues to the moments within these pages and Jason Aaron sticks the landing perfectly. He balances both stories well, weaving details into each that will make for a very interesting “aftermath” issue #24, and giving him pieces to build stories around going forward.

His dialogue in this comic is absolutely masterful, bringing humour into the issue with The Girls of Thunder, the most exciting new Asgardians to hit comics in quite awhile and Roz Solomon’s banter with Coulson. At no point does this humour detract from the epic battles occurring around these characters, but it brings an element of fun to this comic. This is a big, explosive action movie with the greatest fight scenes you’ve seen in a long time, featuring a hero that is being shown at his best. Thor is a warrior god, but at the end of the day what separates him from the warmongers of the realms is his honour and duty, two traits that Aaron explores very well in this comic. His handle on these characters grows stronger by the issue and, no matter how epic a story he is writing, there is always a sense that something even bigger is coming in Thor: God of Thunder. I can’t wait to see what Jason Aaron is cooking up next.

The artist who brings the visual thunder to this series is the incomparable Esad Ribic. This series could not be as epic and powerful with any other artist in the Marvel stable, and his work is career defining. His work in issue #23 is phenomenal, continuing what has been an exceptionally strong arc and closing it out with a bang. This is the most powerful Thor has ever looked, and subtle details throughout the issue highlight what masterful work this is. The Girls of Thunder have a constant air of mischief about them and Old King Thor’s stubbornness and raw power are evident just by looking at the character. Roz Solomon has progressed throughout the series, with Ribic adding more of an edge to her this issue as she takes the gloves off to protect the citizens of Broxton. Ribic’s work is so strong month in and month out that there almost isn’t much left to say about it other than it is brilliant. This book is proof that the right artist paired with the right writer on the right story can lead to greatness.

Thor: God of Thunder is the most heavy metal piece of kickassery in comics today. This series becomes more enjoyable by the issue and The Last Days of Midgard is this creative team’s strongest arc yet. Aaron lets some subtle hints drop as to what may be coming for the Thunder God, and potentially King Thor, and he’s got me craving more. It does not get better than Aaron and Ribic right now, and comics fans should be flocking to Thor: God of Thunder, it is just that damn good.