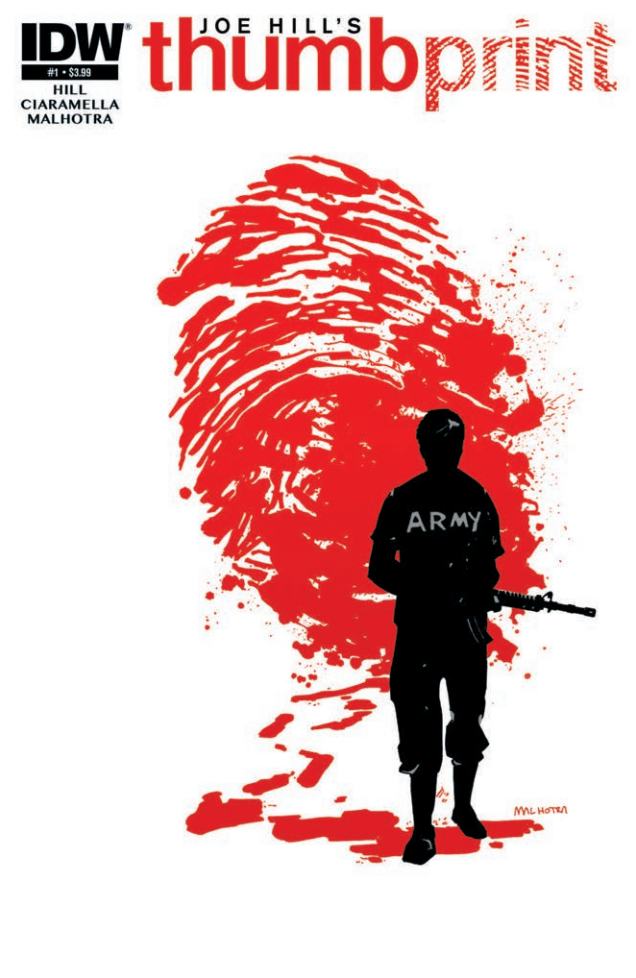 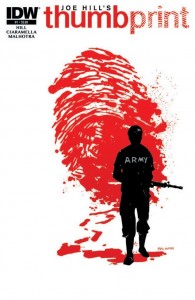 Thumbprint is the adaptation of Joe Hill’s novella of the same name, focusing on an ex-soldier with a dark past…

The story of Private First Class Mallory Grennan is unfolding slowly in issue #1, with readers getting a glimpse of her world both in Iraq and back home after her discharge. This issue pulls no punches, filled with brutality and intensity befitting the situation in Iraq, and also a tense amount of rage and hostility toward the life back home. Hill & Ciaramella bounce between present and past with great skill in this issue, giving readers a lot of back story in a little time without it ever feeling forced. Much of this comic reads like a punch in the gut, which is most likely exactly what Hill & Ciaramella are going for. This is no light subject matter in Thumbprint, and the reality of it is not shied away from at all.

Bringing this tale to life is Vic Malhotra, who’s art struck me from the very first page. The art throughout the issue is strong, and Malhotra does an excellent job of conveying some intense and disturbing situations while not crossing a line and making the issue difficult to read. His style evokes thoughts of Samnee and Aja, and I was very impressed with the subtle touches in his art. His work in this issue took Thumbprint #1 from being a good read to a damn strong comic that has convinced me to continue the series. Missing art this well crafted would be a shame, and I highly recommend people jump into this book to see Malhotra’s work, if nothing else.

Thumbprint, due to its subject matter alone, is not for everyone, but it is a well crafted comic, especially with respect to artwork. I look forward to seeing much more from Malhotra going forward, and I’ll be back for Thumbprint #2.