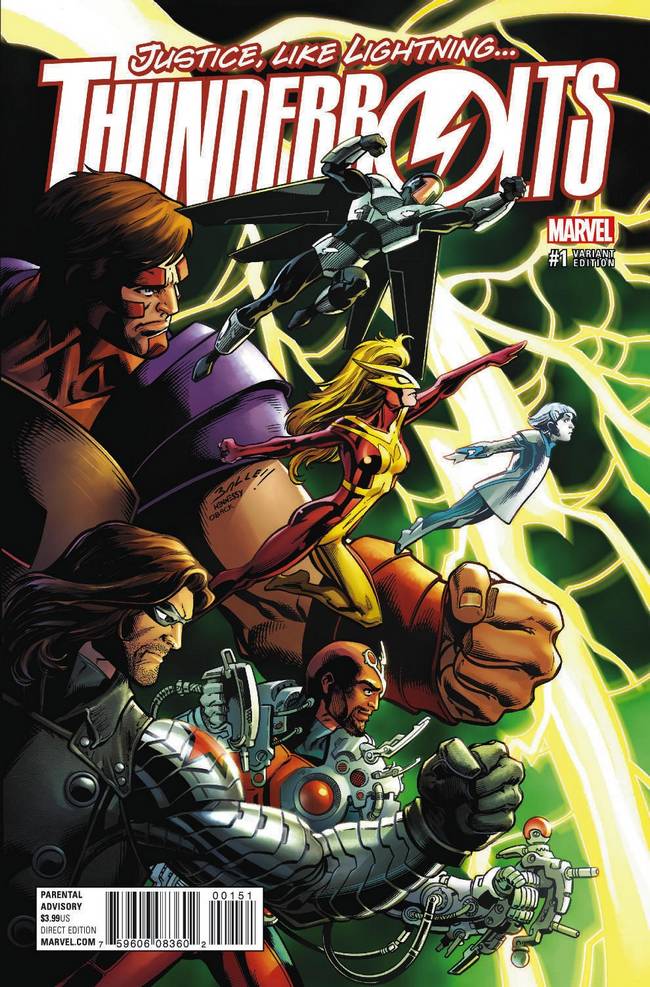 Yet again, the Thunderbolts strike.

Classic members of the Thunderbolts are back to deliver justice like lightning as Bucky leads Karla, Erik, Abner, and Norbert on a mission to begin dismantling the results of the Pleasant Hill experiment.

Along the way, the team butts heads in expected ways while adjusting to life on the run with Kobik, the driving force of the super-villain jail. Many surprises are in store for the team as they come across a secret facility and one of them has a rather painful comeuppance.

Jim Zub definitely gets the tone of the Thunderbolts right, as this issue felt like a logical continuation of the team’s mythos. The mesh of personalities is full of the constant conflict evident in previous series, especially considering many of these people already knew each other. The interactions feel realistic and fit with each of the characters individually.

Norbert is callous, Abner is lighthearted, and Erik is quite the gentle giant. Abner in particular is the vehicle for a brief comedic motif which I found particularly enjoyable.

Zub’s writing of Bucky is certainly worth mentioning. Bucky’s motivations are very similar to Steve’s regarding Pleasant Hill and from the Civil War era, in which he is willing to fight against what he sees as an injustice. He is also emotive and compassionate, especially toward Kobik, which exemplifies his importance on a team like the Thunderbolts. He could easily serve as the moral center, while being able to make decisions many of his teammates wouldn’t think to.

Karla stands out among a crew of men based on technology and brute strength. While initially I was wary of her characterization, I’m happy that many of her shining qualities come through, like her ability to twist situations, her desire for power and dominance, and her willingness to assert herself against the team. She’s callous and self-serving, which makes her that much more awesome.

While I hope this continues to work for her, I also recognize that she is a character constantly portrayed in a myriad of problematic ways. As the only woman on the team, it’s going to be particularly important for Zub to cast her right. Also: reminder that Karla has her M.D. in psychiatry, making her a psychiatrist, not a psychologist, though she has historically done psychotherapy (which many if not most psychiatrists don’t primarily do, but this review isn’t the time or place for rundown on mental health providers).

Thunderbolts #1 hearkens back to the 90s in a number of ways, which is a bit of a mixed bag when it comes to the art. There’s lots of lines and sinews that would fit in the pouch-y era of comic art, which was a detraction from the experience for me. Some of the bodies feel awkward in their movement, positioning, or placement of muscles, as in a scene where Erik is eating cereal, sitting shirtless at a table with odd detailing on his sides.

Where Jon Malin’s work comes through is in facial close-ups, where we get to see important details within each character, and in creating silhouettes that blend into their environment. This is where the art becomes more distinct and where it takes on a personality, rather than feeling like a rehashing of earlier styles.

Matt Yackey’s muted colors underscore the world of a team on the run. Many of the hues are gritty, mired in the atmosphere of dingy environments. Yackey’s work makes it very clear that life is no crystal stair for these renegades. Yet, there are areas what are much brighter, such as Karla’s energy signatures or a scene in which Kobik uses her powers to change the team’s hideout. Yackey works well with musty darkness and uses colors to convey the dismal circumstances surrounding the resurgence of Marvel’s signature supervillain sometime-saviors.

I did not expect my excitement for the Thunderbolts to be so tempered by the first issue. Zub did a great job bringing these characters back, and the fact that most of the team is from the original roster means that the execution of the inaugural issue was going to be tricky, as there’s a wealth of history behind the team. While I’m not sold on the art in its entirety, there are gems that will bode well for the feel of the series.

I’m going to need another issue to know if I’m fully invested in this new run on Thunderbolts, partially due to my feelings about the end of the issue. Yet, I’m willing to give it a chance to see one of my favorite teams have another go-round in the 616.