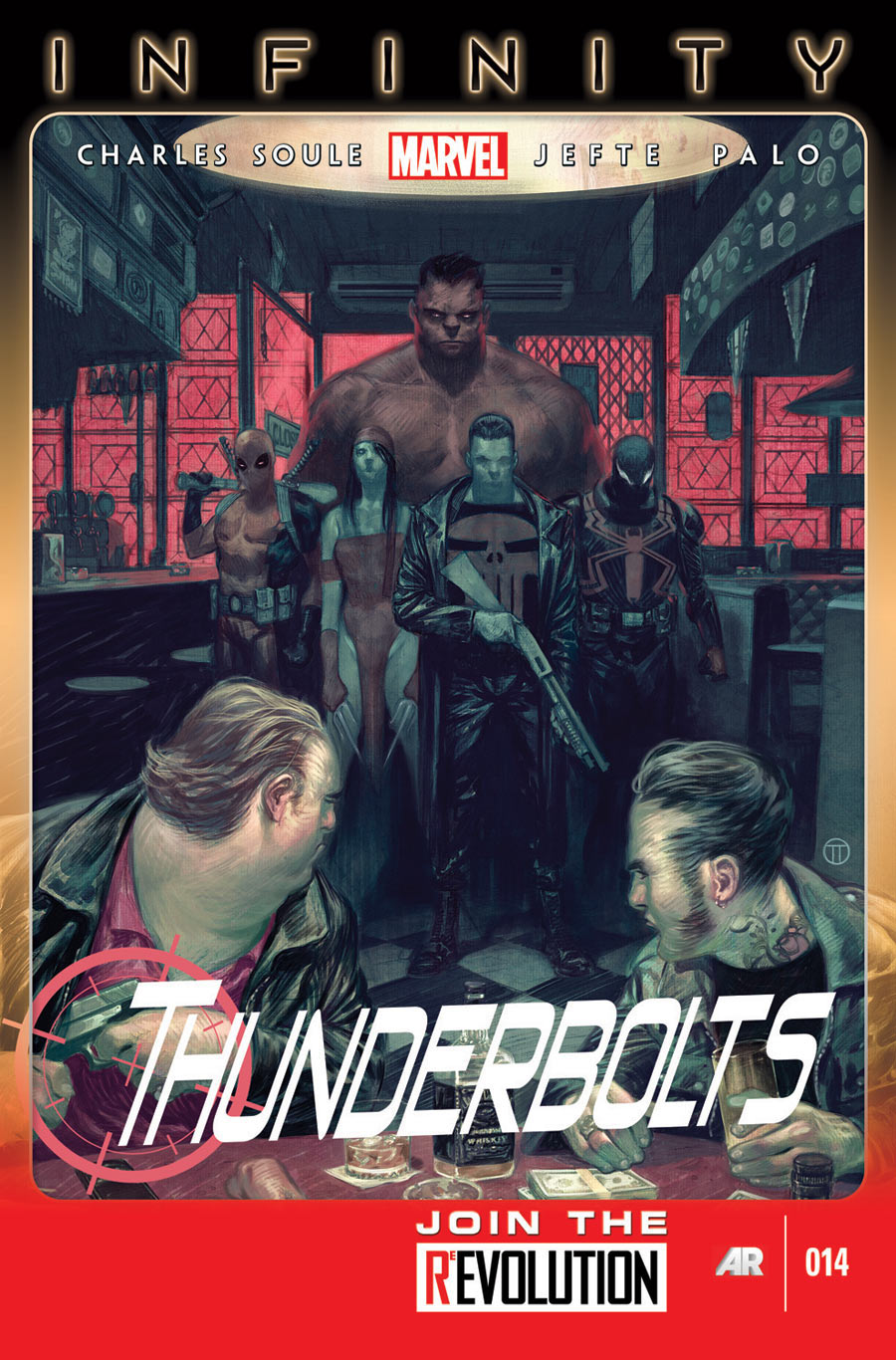 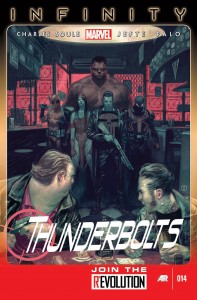 They are the Selfish Avengers: garbed in red and black, operating on the fringe, and motivated only by their own varied ambitions. The Thunderbolts aren’t likely to get involved in the world-saving affairs of their more collectively noble counterparts. In fact, it’s better off for the team when the Avengers aren’t around…

Charles Soule seems comfortable at the helm of the Thunderbolts title, bringing considerable zip to a series that’s been largely a snooze despite its substantial potential. He’s joined in this issue by Jefte Palo, a dramatic artistic change from the more straight-forward presentation of both Phil Noto and Steve Dillon. There is no mistaking #14 as a very different book from previous installments.

From its humorous first page to its foreshadowing final splash, issue #14 is a legitimately enjoyable read, well-paced and genuinely funny. Soule lets the book be as humorous as it deserves without leaning too heavily on Deadpool for the yuks, letting even Punisher stir up some laughs. He rehashes the series’s premise through dialogue naturally at the start of a team meeting rather than cramming it into a narration box, and uses the conversation as a springboard for the next story arc, bringing the series back to its intended roots while also taking a step forward towards its Infinity tie-in. Soule even makes sure to keep the book from feeling isolated by giving readers a look at the team’s intended targets, building up their backstory while highlighting the way Punisher does business.

And Palo’s fantastic visual storytelling provides ample room for Soule to play. He varies his panel shapes and placement without bogging down the view with too much song and dance, drawing further attention to panels that deserve the extra emphasis. His style clicks well with Soule’s more humorous approach to the Thunderbolts, with cartoonish anatomy and expression that gives the same upbeat zip of Soule’s narrative. There is some inconsistency in what ways he chooses to exaggerate anatomy that make his unique style lose some of its charm, but perhaps as Palo continues to draw for the book he’ll settle in on the cast more comfortably.

Pallot on inks and GURU eFX on colors produced a cohesive final product, gentle shading and lighting working with Pallot’s pen lines instead of against them, particularly on skin. Pallot kept to a no-nonsense approach with his inking, letting Palo’s art and GURU eFX’s colors speak for themselves. Blood, bursts of gunfire, and mood lighting for an interrogation scene were all especially well-colored.

Readers looking for an immediately substantial tie-in to Infinity won’t find what they’re seeking until September’s issue, but #14 offers plenty of cushioning for those just tuning in for the event who might need familiarizing with the book’s premise and cast (though it does not flesh the characters out individually). Wherever Infinity takes the Thunderbolts, the new creative team seems more than ready to handle it.