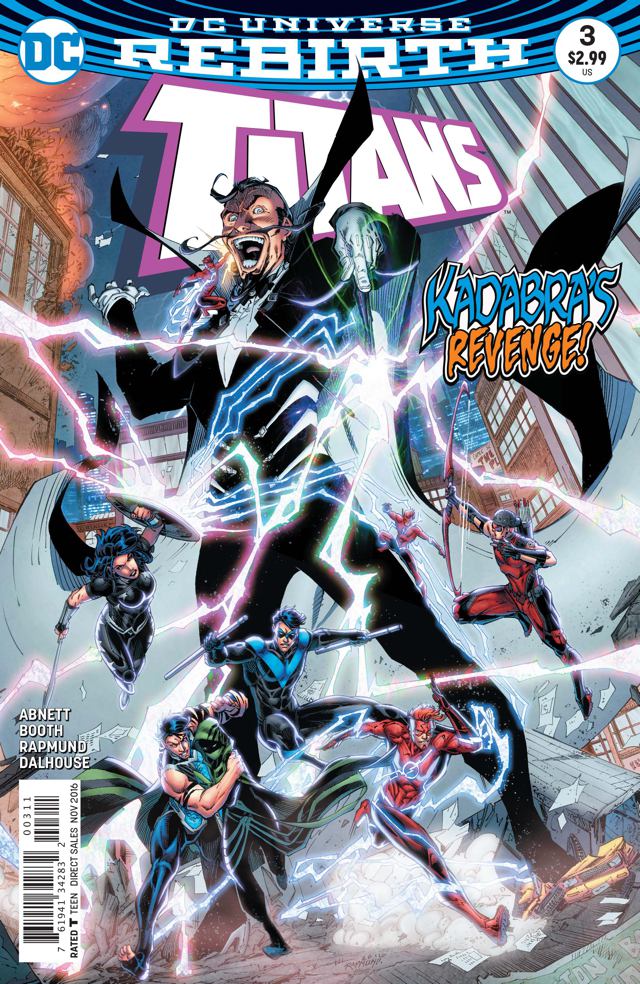 Now you see her, now you don’t.

The Titans are in the midst of battle with Kadabra, fending off their doppelgangers and trying to save bystanders. After subduing their opponents for the time being, they have their own confrontations with each other and their important relationships. Wally decides to wing it and pursue his own past, inadvertently making himself distraught at a sudden disappearing act.

I keep hoping something will pick up in this series, and the third issue did to some degree but it still ultimately doesn’t deliver. There were developments in this issue, particularly with Donna, that I was not fond of. While this chapter seems to tie into a larger DC mythos post-Rebirth, which was a nice touch, Titans is a series that doesn’t live up to my expectations. I’m not sure what Titans is trying to be, as many of the plot elements don’t feel organic or helpful to the story, though I also recognize the anchor of the story, Wally’s re-emergence, is going to put both limitations and expectations on the story.

Dan Abnett has talked about these Titans like a family thus far, but I still am missing that important element. Their relationships with each other seem weird, and I don’t get the impression they actually mesh. Other revelations in the story are out of left field, adding another dynamic to the plot that I don’t feel is necessary. Women in the story don’t feel like they’re utilized properly, and much of the attention is on the men. With characters like Lilith, Linda, and Donna, I feel as though they should be more important and not just the function of a male character’s romantic advances. To a similar point, I loved the inclusion of Karen, though the motherhood angle felt unusual. While I have contention with Abnett’s writing, I do like the interaction between Kadabra and the Titan dupes. This conversation is vital to the story and gives a larger context for the events that have unfolded thus far. I like the exploration of the frame around the rest of the series as well as the dialogue between the characters.

Brett Booth’s pencils work best in grungy or action packed scenes, like most of this issue. The characters are rough and toned, lending well to tense moments. This effect though also means that more calm scenes are more loaded than maybe they need to be. Norm Rapmund employs a similar skill for action packed or terse circumstances, but that may not help to calm down the story when the mood needs to shift. Andrew Dalhouse supplies spectacular visuals which I feel are the strongest part of the issue. These colors add a polish to each page and I love the brilliance of the Speed Force and Kadabra’s powers throughout the issue.

Titans is a series I had higher hopes for because the characters involved, but it isn’t doing much for me. I wish there was more emphasis on how the characters connect and what it means for them to be back together. I also want the women to have a more prominent role outside of common gender conceptions. Titans teeters in the precipice of getting it right, but it doesn’t quite take the plunge. I enjoyed the nods to bigger elements, but overall the series has not been for me.