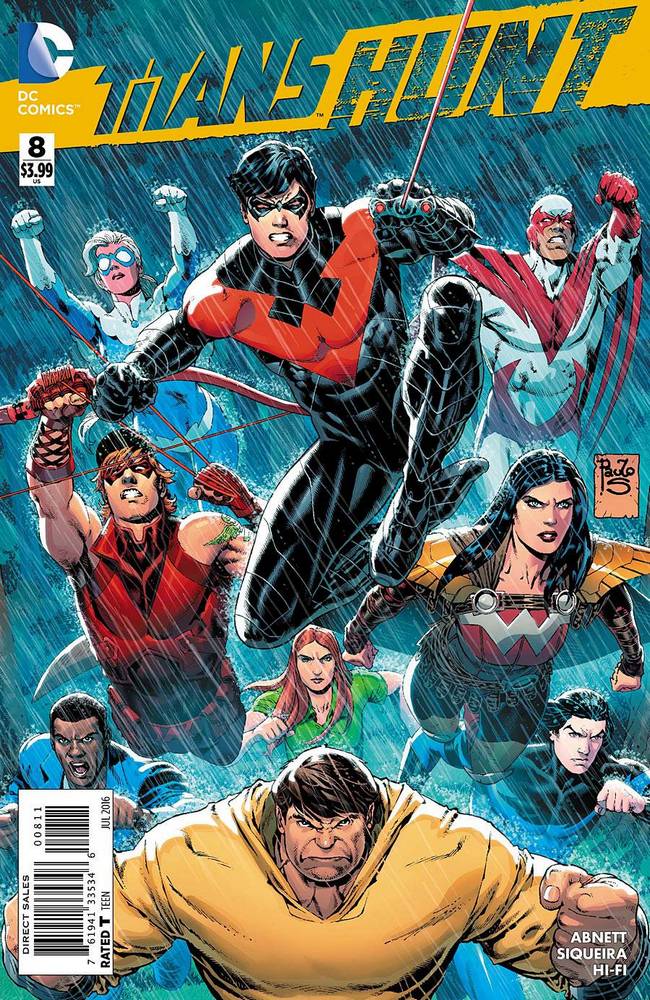 With DC’s Rebirth right around the corner, the final chapter of the eight-part Titans Hunt gives readers some clues for the future, some hope for these fan favorite characters, some spiffy art, and some fun characterization thanks to writer Dan Abnett, penciler Paul Pelletier, inkers Ray McCarthy and Wayne Faucher, colorist Hi-Fi, and letterer Carlos M. Mangual. Titans Hunt #8 presents readers with the final battle between Mister Twister and the former (and future?) Titans.

Throughout the issue Twister keeps referring to the Titans as the “Teen Titans” and repeatedly counts their number as ten. Both of those “facts” come into play throughout the conflict’s cresting, and Abnett builds the team through teamwork, uniting factions to do so. The ten Titans present in this issue are: Nightwing, Arsenal, Garth, Donna Troy, Mal Duncan and his wife, Karen, Lilith Clay, Gnarrk, Hawk and Dove. The thing is they’re not the Titans Twister remembers, nor do they remember themselves the way they might have been.

Abnett balances the “was” and the “is” nicely without asking readers to bend their brains too much. Twister’s memories and the Titans’ suppression of their collective history plays nicely into the struggle between pre-Flashpoint, pre-Crisis, and even the New 52 among readers, creators, continuity, and the publisher itself. The writer clearly chooses to move the story forward over crafting nuance and also chooses to give each character a moment or three to showcase their personality. The characters are the heart of Titans Hunt #8, the conflict is personal, and the result is a Titans comic book that feels like a Titans comic. The trick to balancing the characters is to shift some of the darlings out of the spotlight a bit, which Abnett does with amazing precision, giving characters like Gnarrk and Mal Duncan opportunities to change the course of battle.

Pelletier’s sharp drawings help convey the motion of the tale. With a tight cast of less than twelve characters, Pelletier is able to establish individual identities early and cleanly. That foundation sets nicely for the story to build upon, as Twister’s mad scheme draws upon fantastic interpretations of desolation and rubble. That propels the characters even further forward, giving Pelletier plenty of focus on the titular Titans throughout Titans Hunt #8. Abnett’s story gives Pelletier plenty of room to show Arsenal shooting arrows, Hawk clawing Twister, and even Gnarrk eating pie. Not only are these characters partaking of various events in the twenty-two pages of this comic book, but each character is different from every other character. None of the four women share the same build, physique, or eve nose. Likewise, the men have different body types, with Gnarrk much more robust and bulky than Hawk, who is every bit as scrappy a brawler as the one-time Caveboy. This is a gorgeous collection of images that could each stand alone, but woven together into and through the story they become a “How-To” of Titans and the things that make this group of heroes both a team and a family.

The collection of characters rallying under the term of Titans isn’t as bright and garish as it once was, but that doesn’t stop Hi-Fi from delivering some wonderfully saturated panels. Twister wears drab green, Lilith bright lime; Dove’s blue bodysuit is differently shaded than Garth’s togs. Everything is colored in individualistic manners, further expanding and celebrating the diversity and individuality present on this roster while more completely visually defining the cast present in Titans Hunt #8.

Paul Pelletier and Dan Abnett have become journeymen along the way as DC transforms from the New 52 to the Rebirth-era. Abnett has been integral in reclaiming Aquaman and setting him on the path to Rebirth, and, clearly, has done the same with the Titans here. Pelletier, meanwhile, has touched the current Superman “Final Days” story, this Titans adventure, and the upcoming conclusion of the current Justice League story. This Titans story not only sets the ten (or more?) characters on the path to relevance once again, but it also gives readers a Titans story with character ingrained in the characters they love, adventure that doesn’t sacrifice that character, and an outcome that projects hope for further adventures. This is the eighth installment of Titans Hunt, but it sure feels like a brand new adventure that is wide open and welcoming to readers. I, for one, am glad to have some Titans I recognize and love back in action, and this is the first time I have enjoyed a Titans story since the New 52 started. I can only hope it won’t be the last.