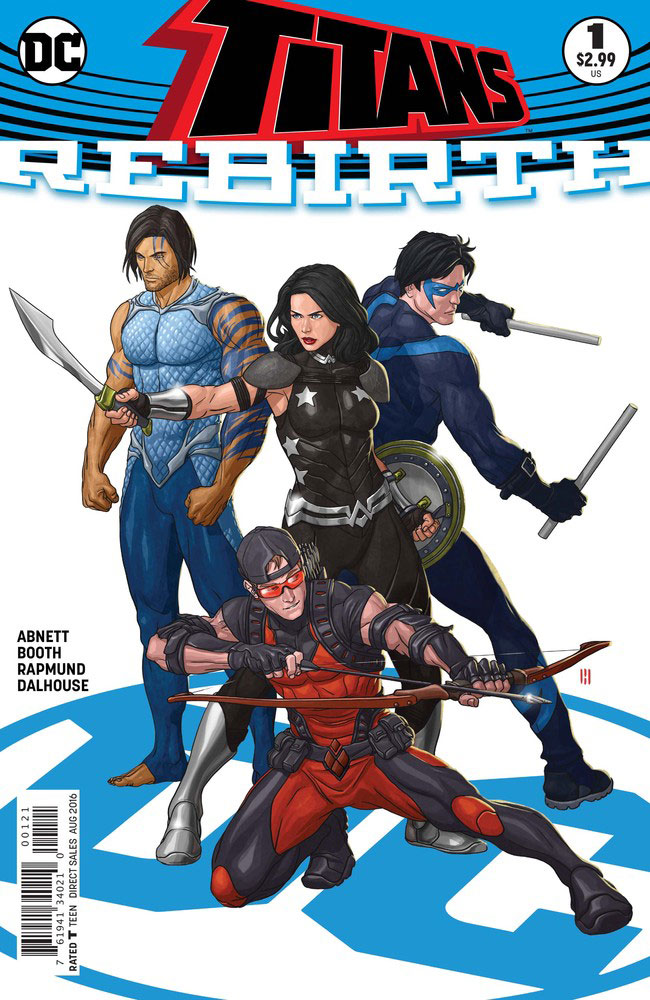 There are spoilers aplenty below. If you’d rather not have other stories spoiled for you, I would recommend reading DC Universe: Rebirth #1, then Flash: Rebirth #1. After you’ve read those two come on back here.

Done? Wow. That was fast. Kinda like you were speed-reading.

Yeah. That’s the last of the spoiler warnings. Let’s stop wasting bits and bytes and get to the review proper.

First things first: there is NO visible antagonist in Titans: Rebirth. None. Writer Dan Abnett and Brett Booth keep the cast lean and the story character-centric. There are six characters between the two covers. Yes. Only six. No, no one dies. Fans of the grim and gritty probably just closed their browser. Sorry.

With that out of the way, I find it only fair to say that Titans: Rebirth is not an exceptionally deep read, but one that is sure to fire fans up, both good and bad.

Undoubtedly there will be readers pumping their fists in the air as they read the Titans’ recollections on their past, but I’m also certain there will be those shaking their heads, muttering, “That’s not how it happened.”

Abnett makes it quite clear through the caption boxes and the dialog present in the panels of this comic that this is an opening chapter of a new adventure. Or, rather, this is a quick Chapter Three to DC Universe: Rebirth being Chapter One and Flash: Rebirth holding the spot of Chapter Two. Or, maybe, as the story builds on threads put in place throughout Abnett’s work on Titans Hunt, this is more of a bridge. Truly, the label is up to each reader to determine.

The story itself reads quickly, as befits a speedster like Wally West. Abnett slips in minor assessments of the characters present in this issue, giving readers a baseline of how each one relates to Wally West. Abnett keeps the tone upbeat and the interactions light-hearted, giving readers plenty to smile about as they thumb through the pages of Titans: Rebirth, remembering their own history with Wally, Dick, Donna, Roy, Garth, and Lilith.

Brett Booth is a solid choice for light-hearted artwork. His characters all have a visual buoyancy about them that treads the line between static imagery and animation, and his angled panels provide a dynamic sense of movement, even if there is no actual movement for a scene where characters are conversing with each other.

Booth finagles the panel angles throughout the story, but some of the most enticing shots are the ones with straighter orientation. Rather than forcing the energy in those panels and through those pages, Booth allows the readers to linger in the more level panels, and lingering is not a bad thing for a story filled with characters reconnecting.

As mentioned, Booth’s characters are quite energetic, but when Donna Troy leaps into action, Booth could stand to fine-tune the flow of her body over filling the panel with energy. One panel in particular looks cobbled together from sketches, made smoother by inker Norm Rapmund, but thankfully, that is the exception more than the norm.

As with the story itself, Booth’s style is sure to supply readers with a measure to judge their own enjoyment of the tale. For the most part, and with this team, Booth works nicely. His style has youthful zest inherent in it. That zest brings hope and energy, both of which Abnett and crew will want to channel.

Andrew Dalhouse brings along some snazzy effects, especially for the static snaps that Wally jolts off to his once-and-future teammates. Lilith’s powers also manifest in distinctive energy, but remain somewhat nebulous as far as exact nature and capability. Letter Carlos Mangual keeps the art clean with the help of Abnett’s lean script. That said, the letterer does a nice job keeping story aligned with art, as some readers may only be meeting some of these characters for the first time.

Titans: Rebirth #1 is a solid offering, not quite perfect, but still packing enough to give readers a chance to catch up to Wally West and the Titans. It also serves as a nice connector between Titans Hunt and the upcoming Titans series, but, ironically enough, it’s not a particularly memorable tale.

It has a purpose, to reintroduce Wally to the Titans and the reader to all of the characters, but this story seems like a playful introduction more than a necessary addition. Readers who have liked Titans Hunt and Wally’s Rebirth thread to this point are in for a treat, but other readers looking for a bang for the three bucks might be slightly less excited.

Personally, I enjoyed this tale, both times I read it. I’m certain between the now and the time Titans #1 finally hits (currently set for July 27) I will most likely read at least this chapter (and maybe Titans Hunt) again.