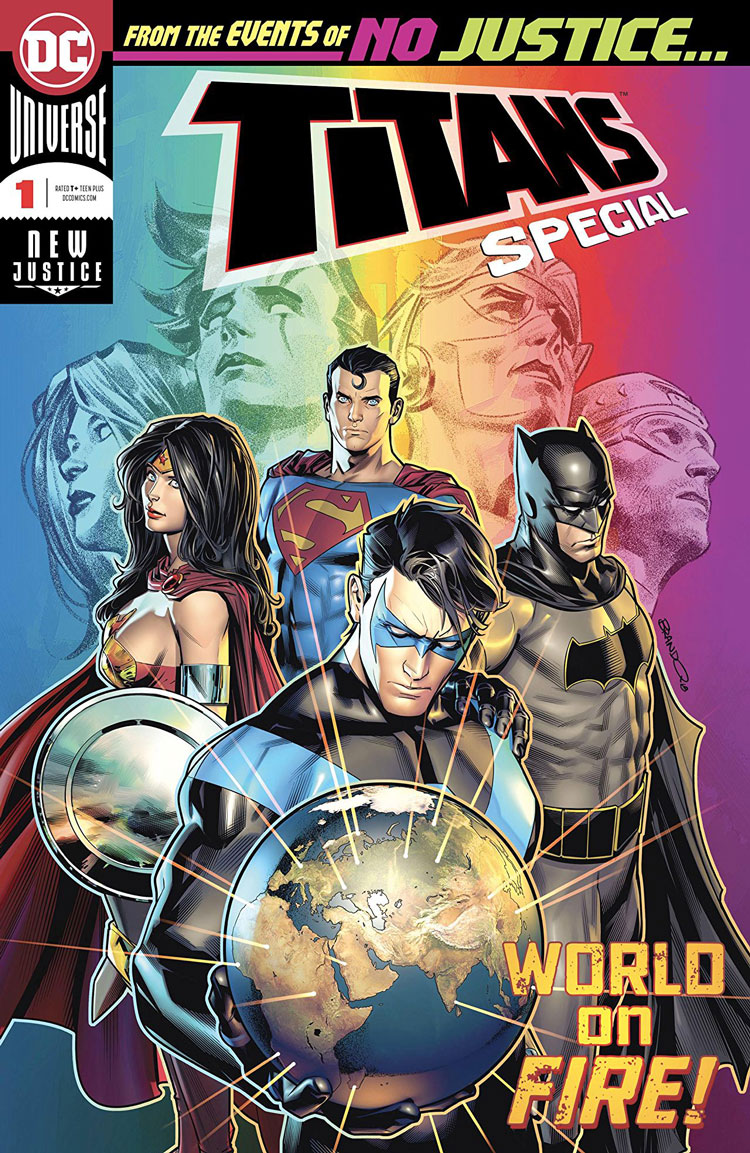 It’s time for a new response.

In the aftermath of cosmic events for the DC Universe, Dick Grayson recognizes that the world needs a new task force to protect the people. After getting the blessing of the League, he sets out to recruit some familiar faces. They may not jive right away, but a familiar and sinister presence is going to push them to find some common ground very quickly.

Titans Special takes me back to earlier teams of Titans, formed out of necessity from the remnants of prior iterations. Dick in particular owns his role as leader, though this is informed by not just a sense of guilt, but a desire to do right by his friends and the people he is tasked to protect. His relationship with each of the people he decides to recruit is clear, and this is where not just he, but his new team members shine.

Dan Abnett capitalizes on the strife and disarray these characters feel as a result of No Justice and Metal, as well as their own individual problems. This emotional note is a helpful jumping off point for the reader to explore the characters and for the individuals’ own stories to begin to unfold. Abnett creates an ethos for this new team that I think has served as a core component for various Titans of the past in comparison to other heroes.

Titans are typically in a place of transition, of finding out where they fit among the world, compared to Teen Titans, who are just beginning their journey, or the League, beacons and mentors to younger heroes. This story sets the tone for what will come next in the Titans series and it feels like a good and true direction for the team and the members who comprise it.

The art team for this comic is MASSIVE! There are so many awesome talents fleshing out the various components of the issue. With so many people behind the ink and colors, we get one of my favorite modes of storytelling: an amalgam of different styles, each with their own impact on the story. From Raven’s journey in the desert to the emotional reunion between Dick and Donna, each artist and colorist evokes a different mood for each Titan, a nod to how they will all contribute to the narrative of the comic and to the team itself.

I will always hold a fondness for Titans new and old. This Special captures something, well, special, as the team embarks on a new direction. With their connection to the League and their own space, I think we are headed into some awesome new territory. The characters form a good mix of abilities, from magic to science to might, and their personalities seem as though they will blend to make each other stronger, much like Titans tend to do. It was a delight to see how a new chapter is starting for some classic DC characters and it will be a delight to see how they are cemented in DC continuity.