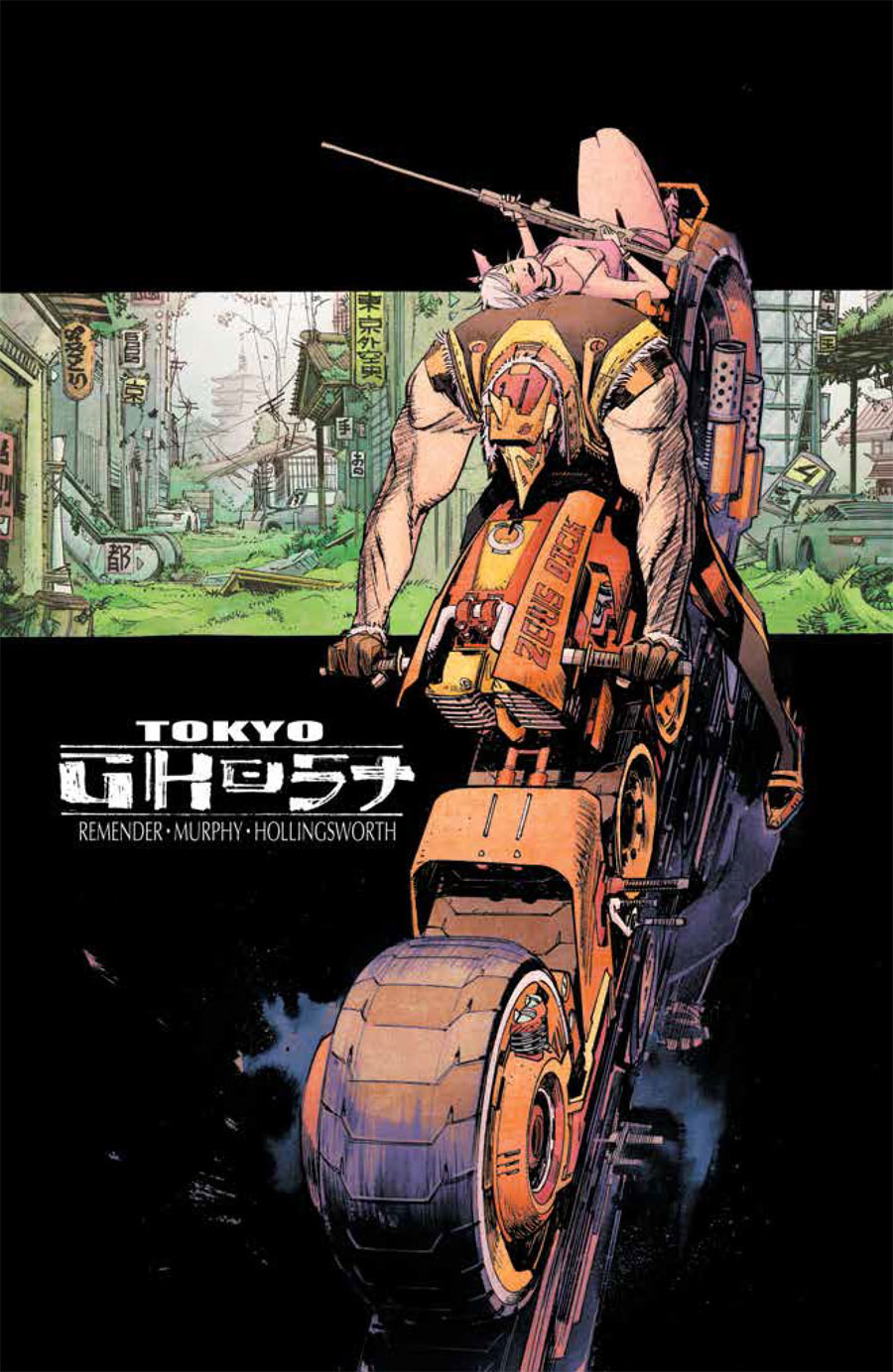 “I am the Jesus of murder!” Yes. That’s a thing actually proclaimed in Tokyo Ghost #1 from Rick Remender, Sean Murphy, and Matt Hollingsworth. There’s that, and there’s a whole lot of other things said in this book by murderous wackjobs that probably shouldn’t be reprinted here.

So yeah, Tokyo Ghost. Prepare to have your mind warped in the most insane way, because that’s going to happen if you pick this book up. Which, spoiler, you should.

Tokyo Ghost comes from the often deranged but most of the time brilliant mind of Rick Remender. You know, Black Science, Low, Deadly Class, and Fear Agent fame? Co-created with Sean Murphy (Punk Rock Jesus, The Wake, Chrononauts), this is a book that takes what’s currently wrong in society, amplifies it by a hundred million gigawatts of insanity, puts it through an artwork blender of bad ass vehicles, incredible character design, and Murphy’s characteristic kinetic style, then spits it out, ready to be consumed in its unabashed glory.

Tokyo Ghost follows Debbie Decay (THAT NAME) and Led Dent as they parade through a technology-obsessed landscape hunting for the lawbreakers. On top of that, the “law” is corrupt; yet, Debbie and Led are doing their best to be free of it all while upholding the legal regime. Their target, Davey Trauma, (the murder Jesus proclaimer from above), wreaks hell for them in this issue (would you expect anything other than that with a name like “Davey Trauma”), and this issue ends in a plot point that will leave you craving more.

So let’s get critical. Debbie Decay is a badass. Let’s get that out of the way. However, she’s a badass that leans just a little bit too much on her love and the physical tank that is Led Dent. I’m a little worried that her character will fall the way of a handful of Remender’s other female characters in some of his other series, but definitely not ready to have a final verdict on that after one issue. With that being said, the characters in this first issue are hands-down fantastic and full of craziness.

Remender notes that fans of Road Warrior would enjoy this, but I also think this book is reminiscent of the Borderlands game franchise. With the world that Remender and Murphy have built with just one issue, this setting feels so cultured and layered with a big touch of no holds barred, anything goes, violence. It exposes the pitfalls of human reliance on technology and constant stimulation in a very intelligent and very entertaining manner. This is a smart book wrapped in action-packed gift paper.

One of the things that draws me to Remender’s books is his use of narration to really get into the character’s mind, provide necessary background to complex worlds, and push the story forward. Some people think that the less narration is better, show don’t tell, etc. However, Remender’s use of narration in this first issue helps build the world quickly for maximum enjoyment in minimum time.His dialogue is then filled with the most inventive profanities infused with passion I’ve seen in awhile, constantly moving the issue in time with the plotted action.

Rus Wooton’s letters are really incredible in this issue, complete with color blends, diverse fonts, and the ability to fit all that narration and dialogue on the page in the most seamless way possible.

Remender is telling a great story here, but it’d lose a helluva lot of its punch without Sean Murphy’s incomparable art. Murphy seems to be consistently paired with other creators that suit his style in the best possible ways. He’s absolutely magnificent when it comes to detailed landscapes, fast movement, vehicles, quirky characters… okay he’s magnificent at everything. There’s SO MUCH going on in Tokyo Ghost in the upfront action, it’s mesmerizing how much more Murphy can get into the backgrounds to contextualize this story even more.

Matt Hollingsworth is the perfect colorist for Murphy’s work. He manages to capture the mood, highlight the intricate background detail, and make sure focus is on our characters. I could honestly look at these pages for hours, with the amount of detail, yet his art is so energetic, it makes it difficult to stop the flow of reading. I want this art in this book forever, but then I remember Chrononauts volume two is impending and I’ve decided to just set out to clone this art team so I can have it all. You take one look at that lineart, and you’ll agree.

Okay, so I’ve professed my love for Tokyo Ghost. This is a great book. Only time will tell what’s in store for these dynamic characters (and I really hope it’s something strong and independent for Debbie). So, before time is up, and next month’s issue is out, make sure to grab this book. If you don’t it’ll probably be gone (or gone to second printing), so check this out early on. Tokyo Ghost is for fans of hard and fast action, harder and faster dialogue, and heart-stopping moments of insanity.

You know you want it.