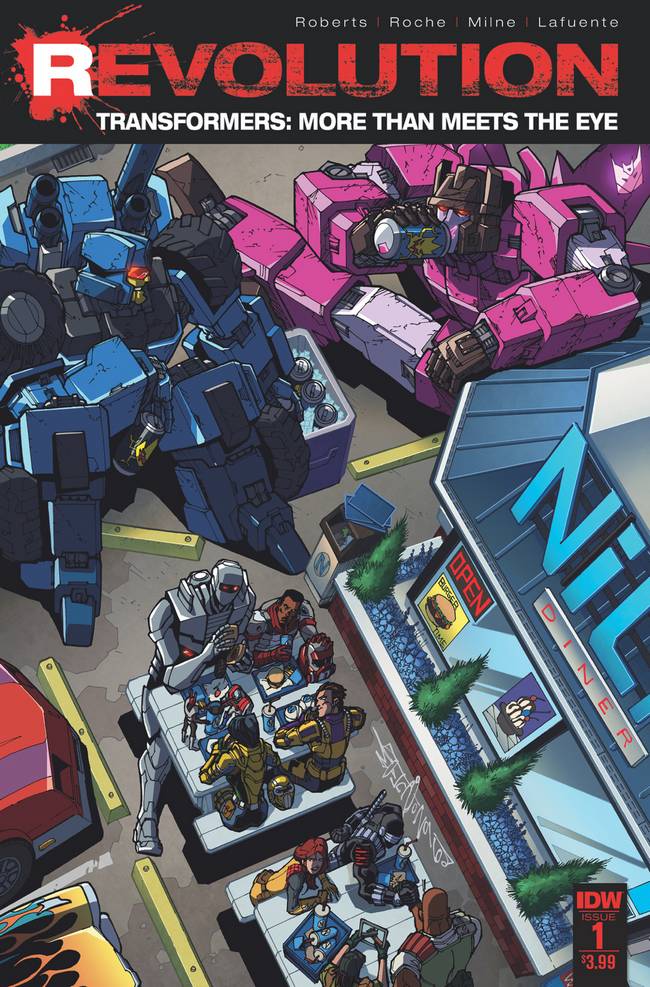 Transformers: More Than Meets the Eye has it’s long-anticipated Revolution cross-over issue as the Scavengers find themselves on Earth and caught up in the multi-franchise crossover that will change the way you look at cross-brand value-maximizing corporate tie-in comics forever!

IDW’s Revolution cross-over is such an odd little duck. It’s not necessarily bad, but it’s a cynical enough enterprise that it can only be understood by starting behind the scenes and working your way into the work itself. So: IDW has a license to produce comics based on toys made by Hasbro. Hasbro is a multinational conglomerate that owns the intellectual property to numerous toys and games. In the Eighties, in an effort to market those toys and games, Hasbro (or the corporate antecedants thereof) arranged for the creation of various cartoons and comic books that were thinly-veiled toy ads. If you grew up watching Saturday morning cartoons in the Eighties, there’s a good chance Hasbro owns a significant percentage of the mental real estate of your childhood.

What the toy companies that now make up Hasbro understood is that human beings are storytellers, and one of the best ways to persuade a human being is to tell an entertaining story where the moral is that they should do something you want them to do (in this case, buy some toys). What they, perhaps, did not understand is just how powerful and enduring stories can be; the stories live on decades after the products they were created to sell have disappeared from shelves.

And so we come to Revolution. Revolution is a cross-over designed to sell readers on a shared comic book universe populated by toys that you can, for the most part, no longer buy. It’s a universe built on a foundation of nostalgia for stories that were originally created, cynically, to sell toys, but which managed to engender sincere feelings of love and affection.

Nuts and bolts. Revolution is a cross-over between IDW’s critically acclaimed Transformers comics, its on-again, off-again G.I. Joe comics, and its nascent new Hasbro-based comics, Micronauts, Rom: Space Knight, Action Man, and M.A.S.K. It’s a shared-universe cross-over event because shared universes and cross-over events are what you need to do to sell comics these days, particularly comics that might not have the brand recognition to successfully launch on their own.

Which brings us, at long last, to Transformers: More Than Meets the Eye: Revolution #1. The creators of this comic are also responsible for Transformers: More than Meets the Eye, one of the best comics on the stands today. More Than Meets the Eye is a well-crafted, complex, funny, and at times deeply poignant work. This special is a chance for the creators to take a somewhat more meta approach to the material. They grapple with the fundamentally cynical nature of MTMTE‘s existence as a toy tie-in comic, and Revolution‘s existence as a franchise-building cross-over event, by taking a step back, giving us a nod, a wink, and a shrug, and saying “What are you gonna do? It’s Corporate Comics all the way down.”

The comic follows the scavengers introduced way back in More Than Meets The Eye #7. Misfire and Spinister are searching for a runaway, rampaging Grimlock. They’re disguised as M.A.S.K.s, which are in turn disguised as Transformers, and in the course of their search they meet an extremely minor member of G.I. Joe named MP3. Meanwhile, the other scavengers prepare Crankcase for a date with an unknown Transformer he met on an online Decepticon message board. What starts as a shot in the dark at friendship, and possibly romance, turns into something far greater: An opportunity for cross-franchise synergy with the potential to create Total Brand Awareness.

Between the hapless Joe, the almost-date, and the too-perfect conclusion, this was the most I’ve laughed at a comic all year. Roche and Roberts bring biting wit and surprising poignancy to this tale of corporate tie-ins run amok. It simultaneously acknowledges the cynical nature of its existence and suggests that there can still be meaning and power in a work that was created for the purpose of selling you something.

You’ll probably be lost trying to read this comic if you haven’t at least read the first Scavengers arc of Transformers: MTMTE (issues 7 and 8). You should be able to follow along with reasonable ease even if you haven’t read any other issues of the Revolution cross-over, but some of the finer points may elude you if you haven’t been keeping up. Nonetheless, if you consume media in the year 2016, you should be familiar enough with the sort of big cross-over events that it lampoons to get all the jokes.

Alex Milne’s art is perfectly suited to the tone of the book. He expertly portrays dynamic action as the Transformers fight, race, and fall in love. He also does a great job with the humor, giving the Transformers and the Dire Wraith a depth of expression you wouldn’t ordinarily expect of robots and alien beasts. Lafuente’s colors are vibrant, and look particularly lovely when depicting sunset on a desert mesa as the various characters engage in heartfelt conversation.

Transformers: More Than Meets the Eye: Revolution #1 is a fantastic, well-plotted, hilarious send-up of the type of corporate event that spawned it, and simultaneously serves as a kind of defense of the genre. Highly recommended, whether you’ve been reading Revolution or not.