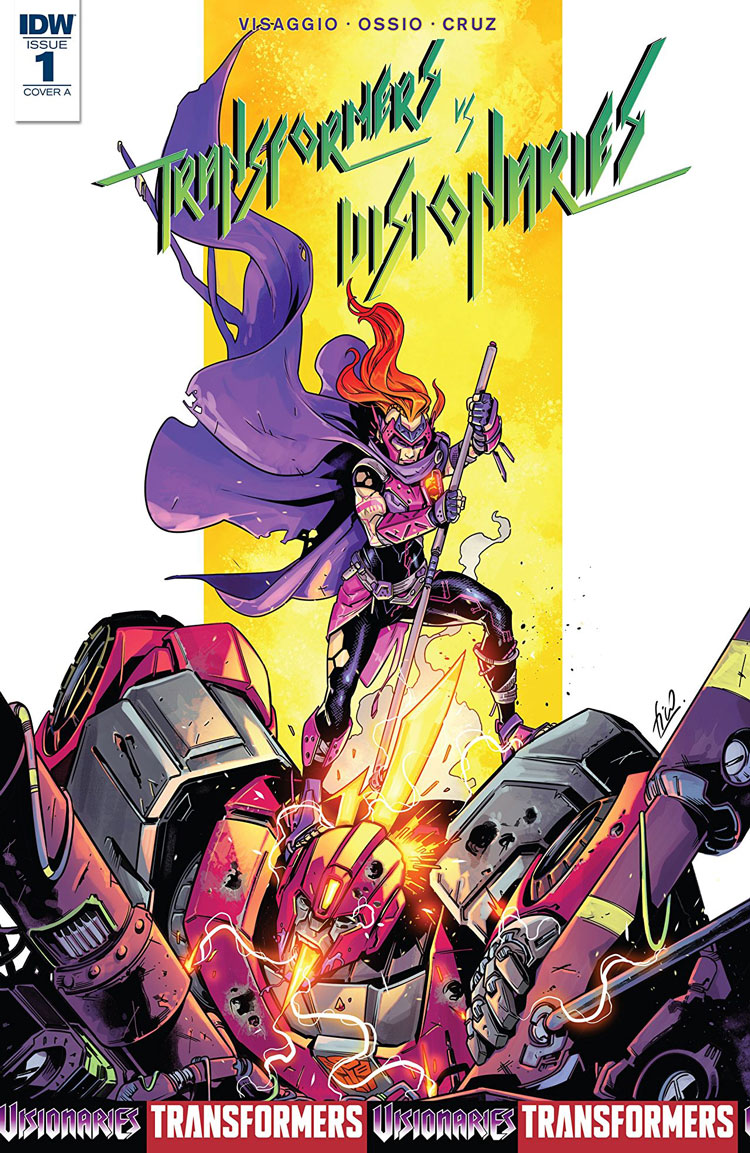 It was a commonplace part of everyday conversation as a kid: which hero is stronger than the other. Dream matches were conjured and shared back in forth in stories that we never thought could possibly come to life.

In the past few years, though, childhood wishes have been granted time and time again. This time IDW brings to life a confrontation between the Transformers versus the Visionaries in Transformers Vs. Visionaries #1. Almost everyone knows who the Transformers are but the late 80s toy and cartoon property Visionaries are often lost in an overcrowded deluge of franchises.

This crossover event will more than likely change that.

In what could be a crossover gimmick gone wrong Magdalene Visaggio successfully brings together these two properties for an interesting and meaningful story. By all rights the Transformers could have easily overshadowed the lesser known Visionaries but it turns out that both story and art wise the opposite is true. In fact, the only thing keeping the story balanced is our familiarity with the Transformers characters used in this story.

This is especially important for the final moments of the issue. Visaggio has incorporated key parts of both franchises in this story and made it easy to get into the story without being lost. The writing is exceptional, as expected from Visaggio, especially the dialogue of the Visionaries.

At the outset of this story both sides have equal footing as far as morality goes. Either side just wants to survive and they are willing to negotiate to make sure it happens. This keeps the reader from falling too heavily on one side or the other. This pulls the reader into the same predicament as the characters. It’s absolutely an interesting story and due to the events of the surprising ending shows that it will have consequences for the larger universes of both franchises going forward.

Fico Ossio’s art work is great throughout the issue but where it really shines are in his renditions of the Visionaries. The characters from the Visionaries universe are drawn with beautiful and intricate details which completely outshine the Transformers. They are much more pleasing to the eye to take in but the Transformers are definitely not ugly. Though wide shots of robots look a little like their toy counterparts, close-up panels of them look great.

It works well that the Visionaries seem more threatening than the Transformers otherwise it would feel like the robots would easily crush the humanoid invaders. Ossio’s action scenes look awesome and are filled with lots of energy. There are a few large panels in this issue that are drawn beautifully and give the story a very epic feel to it.

Colorist David Garcia Cruz brings the book to life with vibrant color on both sides of the conflict. His work brings to life the humanoid race while keeping the robotic race feeling cold but still with a spark of life in their eyes. The story is engulfed in a lot of shadows and sets the mood as foreboding and tense. The lighting on whole is excellent and raises the overall quality of the story to another level.

Gilberto Lazcano takes care of lettering for this issue and does a good job overall. There is a lot of dialogue going on back and forth between the races, but it is all easy to read.

Transformers Vs Visionaries #1 is a surprising and complete success due to the high quality of work of Visaggio, Ossoio and Garcia Cruz. Together their skills take an idea that could get lost among a dozen others and bring it to the forefront. Though Visionaries weren’t able to achieve much success in the 80s, there is a chance that they could be more popular now. This issue is absolutely worth the read, especially for lovers of either of the original franchises.