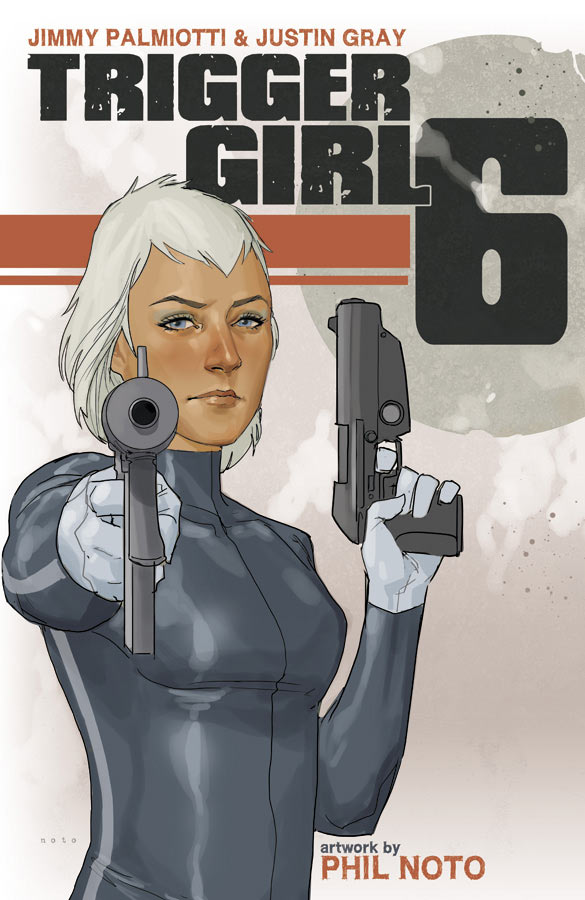 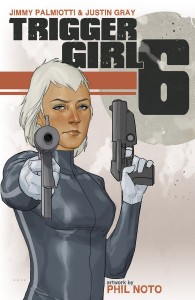 Collected from the pages of Jimmy Palmiotti and Justin Gray’s Creator Owned Heroes anthology title, Trigger Girl 6 is a creative and refreshing take on the female assassin genre, blending suspense with a distinct science fiction edge in one of the most satisfying short stories I’ve read in a long time. Shorter than the usual graphic novel or mini-series fare, this near future tale of a would-be assassin who stumbles on her own origins in the process of attempting to kill the President of the United States is reminiscent of the best classic sci-fi stories — plot-heavy, but with a tease of characterization, and an overarching moral that doesn’t hit one bluntly over the head.

Gray and Palmiotti clearly perfected their craft for this volume, as the entire story feels balanced in a way very few short-form projects ever are. No detail or scene seems superfluous, nor any action rushed, as we get a beautifully paced introduction to both the Trigger Girl’s motivation and abilities, as well as the President’s personality under fire. It’s a testament to the writers’ sensibilities that the book eventually slows down to rational talking points, whereas it could have been so easy to reduce the Trigger Girl’s mission to an absolute bloodbath. But make no mistake, this book has a ton of action, and Palmiotti and Gray are able to orchestrate the abilities of a near perfect killer so that the lead character is constantly on the run, but clearly not breaking a sweat and ever a step ahead of her pursuers. Even at the Trigger Girl’s most confused moments — as her memory only contains the order to kill the President, not anything of her own origin — she is calm, collected, and in control, sexy and dangerous without in any way feeling objectified or gratuitous.

Along those lines, the stunning artwork by master penciller Phil Noto goes a long way toward presenting the Trigger Girl 6 as a formidable opponent, and yet genuinely realistic looking figure. Noto has long been admired for his ability to portray strikingly beautiful women who don’t come across as exaggerated or… pardon my French… boobtastic. Here, the artist excels at creating a stunning lead character, whose physical presence is as intimidating as it is alluring. In one particular nine-panel grid, Trigger Girl manages to take down an entire gang of threatening kids standing between her and her destination, and the movement, combined with the fantastic word art, makes for a thrilling display of her physical prowess.

There is a huge mid-story reveal here that I would love to extol the virtues of — from both the writing and artistic points of view — but I’d rather leave the spoiler out of the review and simply insist that you check this story out. Neither exactly what you’d expect, nor more than is necessary to tell a beautifully-crafted short story, Trigger Girl 6 is the perfect addition to your read pile this week, especially if you want to read a damn good sci-fi story featuring one kickass lady taking on a mission way more important than she could have imagined.