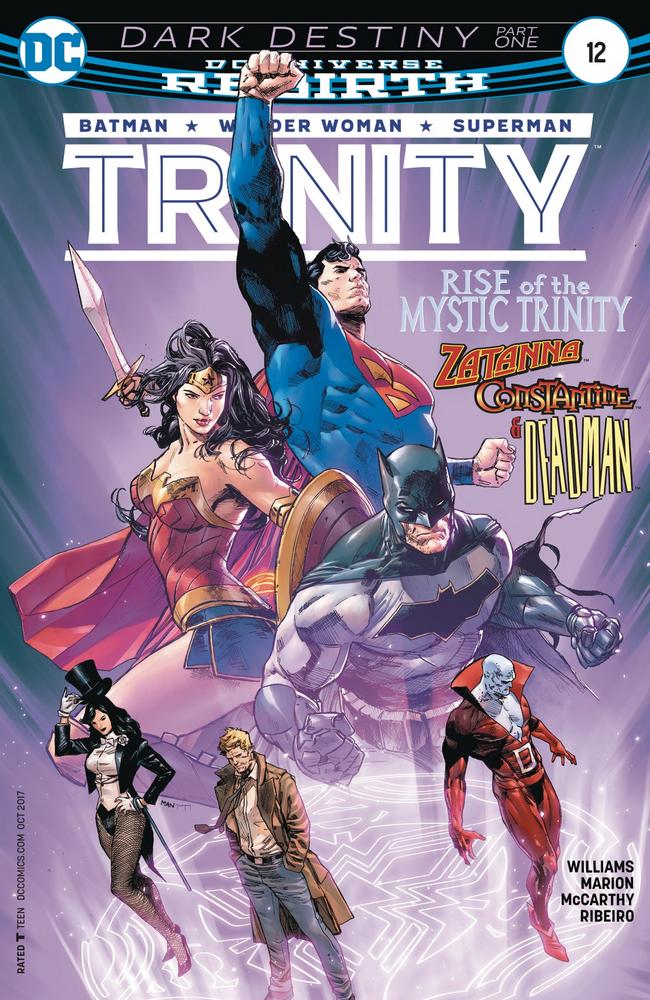 While notionally the first issue of a new storyline, this issue actually continues a plot thread started in Trinity #7 and continued in Trinity Annual #1. Cersei and Ra’s Al-Ghul are using Pandora Pits to demonically possess Red Hood and the Outlaws. As the story opens, the Trinity have captured Red Hood and tied him up using Wonder Woman’s golden lasso, then summoned John Constantine, Zatanna, and Deadman to assist in exorcising Jason Todd. What follows is an extended riff on The Exorcist, with Deadman, Zatanna, and Constantine attempting, by turns, to free Todd.

This issue is entertaining and fast-paced, with appropriately gruesome, supernatural-tinged art. Red Hood bears the brunt of the twisted metamorphoses, his face reconfigured, as the plot calls for it, into a demonic red skull or a mouth pried open wide enough that Constantine can hop inside. The macabre twists blend seamlessly with dynamic, superheroic posing and dark, muted colors to create a more spooky, supernatural feeling than has been present in this series so far, without ever feeling like it loses continuity with the art styles that came before.

The comic makes good use of banter to establish the characters and their relationships to one another. The reader is thrown into the middle of the plot with half a dozen characters who haven’t previously appeared in this book. Yet, without stopping for ponderous exposition, we get a strong sense of character voice for each of the people thrown together in the mansion where the exorcism of Jason Todd is taking place.

It’s certainly a fun outing, and it’s nice to see characters like John Constantine and Zatanna pop in and interact with the Trinity (though they interact more with each other than the titular trio; on starting my second read-through for this review I’d forgotten whether Superman was even in this issue). At the same time, the story can’t help feeling just a bit slight. There’s so much time spent on the Mystic Trinity that there’s only minimal attention paid to the main trio. It seems to be setting up an interesting confrontation between Batman and Jason Todd, but for now, that’s all it is: Setup, plus an admittedly fun exorcism scene.

This issue does speak to a larger problem of lack of focus in this title. It’s very odd; Trinity feels like two distinct, long-term stories awkwardly jammed together. There are the nostalgia-tinged, almost pastoral chapters by Francis Manapul, all of which feel tied together through consistent plot threads. But then, interrupting those chapters, is a story about the Pandora Pits, told by multiple creative teams. This sort of interweaving of distinct plots can work well, as seen in Greg Rucka’s run on Wonder Woman with Liam Sharpe, Nicola Scott, and Bilquis Evely. But the Manapul Plot and the Pandora Pits Plot aren’t really in conversation with each other, nor are they coordinated in a regular or consistent fashion. The book winds up suffering for the inconsistency.

Trinity #12 is an entertaining beginning to a new story, but is hampered by the slightness of the premise and the jarring inconsistency with previous issues. The art is a highlight, and almost worth the price of admission on its own.