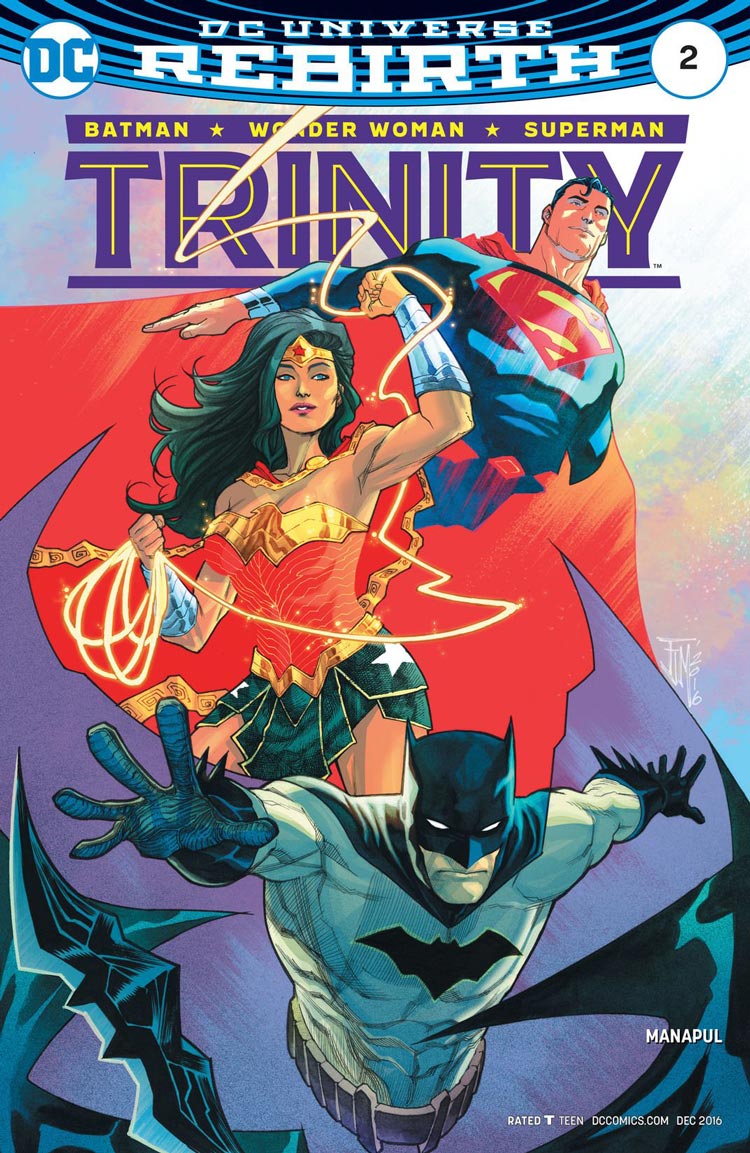 We are not at war.

Clark, Diana, and Bruce take a trip down memory lane into a Smallville right out of Clark’s fondest memories. A young visitor with a surprising secret struggles to make sense of his changing world, and the trio, along with an important part of Clark’s past, journey to find him. Unexpected turns make this journey more dire than it appears, leading to a new face entering the fray and turning the Trinity’s adventure on its head.

Diana’s words, “We are not at war,” are a perfect summation of Trinity #2. The trio really isn’t fighting a major threat, nor are they in the typical battle we’d expect from DC’s mastheads. Instead, they are working to build a stronger relationship amongst each other and to understand this new Clark’s role in their world.

I find it startling and ultimately endearing that Bruce and Diana do not know this version of their friend, but the old ties that existed between them are emerging, complete with an understanding of each other in the midst of conflict. These characters work best when their ideals and histories clash because they are able to take their disagreements and create a better plan rather that deepen a schism.

I’ve said before that Dad Clark is best Clark. This issue’s appeal for me is seeing this part of him in action again, complete with compassion and dedication, but also seeing where it came from. Jon and Martha instilled important values in their son, and these have become manifest with Jon’s existence.

Clark and Jon’s parallels are striking, as they both want the best for their sons and work toward that with the best of their ability. They both deal with the struggle of maintaining secrets and not fully knowing how to cope with significant changes in their children, but they always approach them with the utmost care and love, even when they feel they’ve made a mistake.

I cannot say enough how much I value Francis Manapul’s talents within Trinity #2. Here, we have regained the linchpins of the DC Universe in spirit, execution, and action, largely due to Manapul’s ability to draw out each of the characters’ personalities without losing the story or creating a mishmash of characterization.

Clark’s introspection guides the plot through his longing, his kindness, and his grief. Using him as the narrative framework softens the story, engendering complex emotions that touch on what he’s experiences and how they relate to those of our own.

Manapul creates a dual effect on art, casting dramatic scenes in dark lines and diverse perspectives, while gentle scenes are painted with the tender hues of watercolors. The darkness of caves, waning light of day, and the growing brightness of the morning are a visual shell which hold the many feels which emanate from the story and its characters.

I appreciate Manapul’s ability to shift emphasis, weight, and color through each scene and I love the effects that such changes create within the story.

Steve Wands contributions on letters fit within the atmosphere Manapul expresses through story and art. Wands is very careful to use bolded emphasis in words deliberately and rarely. Not only does this effect mirror the nature of the story, especially considering the ending, but it really brings home the most important parts of dialogue. I also really love the surprise appearance at the end and the visuals used for their name in text.

Trinity #2 is a dream. It hits on all the things I love to see between the Big Three of DC, with Manapul and Wands working together to create narrative and visual layers to the story which take important advantage of its evocative nature.

This comic and this issue is proof that things don’t have to be big on action to be good, but also that deeply emotional stories can exist within the context of cape comics. I highly encourage you to pick up this story, and I hope you enjoy it from its startling beginning to its shocking end.