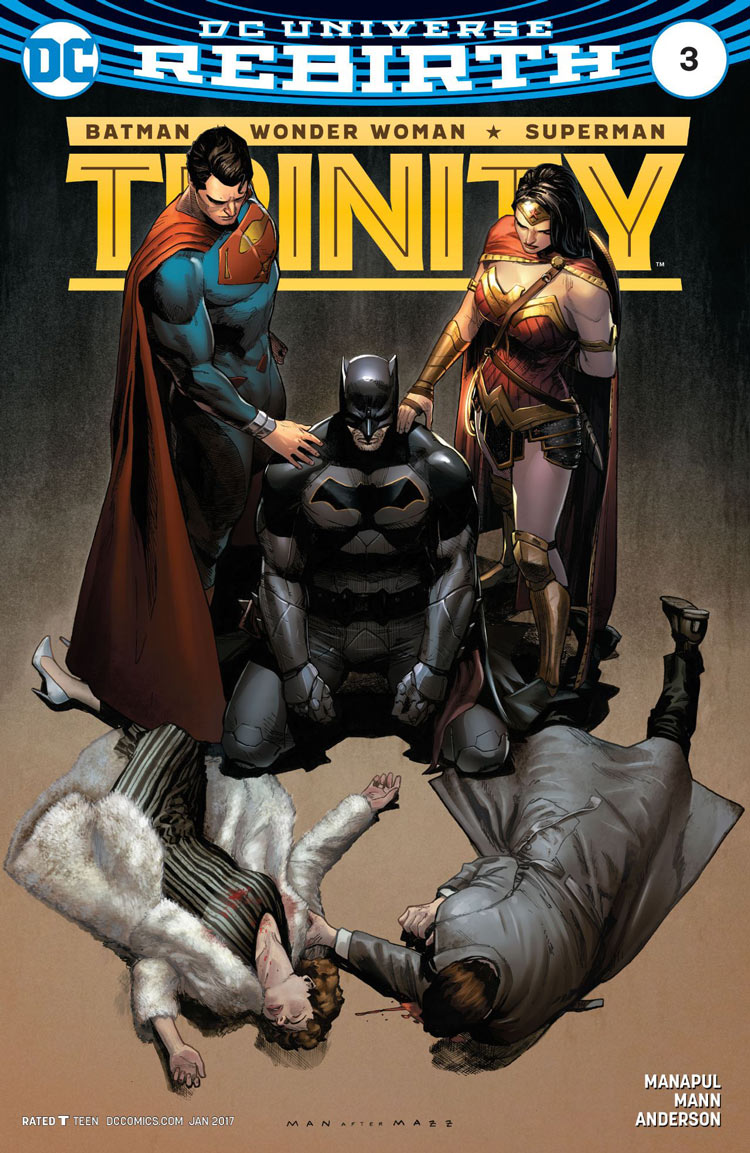 It’s not your fault.

The Trinity takes a trip to Gotham, witnessing the murder of Bruce’s parents and how a young Bruce is trying to cope. Bruce feels something is off from what he knows, leading to a terrifying encounter for his young self and his own struggle to reconcile his past, the present world, and his enduring grief. In a different place, Lois comes across the real threat but promises her own form of retribution by story’s end.

My favorite thing about Trinity is the exploration of each of them — as well as Lois and Jon — as powerfully present forces of emotion and experience. Whether through sentimentality, loss, or virtue, they each represent something that combines to be the driving force of their trio.

This comes to fruition in Trinity #3 with how they respond to Bruce’s tragedy. Clark is visibly angry, unsure how to use his compassion to help Bruce, while Diana is emotive and steady. Bruce himself is true to form in his discovery that things are not okay and what they are experiencing may not be real.

Trinity continues to explore the classic and important qualities of Clark, Diana, and Bruce and that shows that it is trying to recreate them as the forces of good we all love, but also as characters who are moral guideposts for their world.

Francis Manapul tells the age-old story of Bruce’s first steps toward becoming Batman, but with a useful twist which revives a part of Bruce that he keeps hidden from others. Seeing his parents die again lead to an important discussion of his grief and guilt, and Clark and Diana are in tow to help him work through his feelings.

Manapul is writing a Trinity that is at its best, including Bruce and the deep emotions that lay underneath his sometimes abrasive veneer. Their relationship with each other has been a shining spot for the series, and to see it play out in this context reveals the dynamics of Clark, Diana, and Bruce and how they transfer their core qualities to different issues.

I hate to see Manapul transition to just writing but damn does this art team get the job done. I also feel the shift was important for the tone of this issue. Clay Mann, Seth Mann, and Brad Anderson all work together to create a scary, bleak, dismal Gotham.

Besides the change from the farm to Gotham, there is no break from the tension of Bruce’s trauma, though there is resolution made that much more powerful from the work of Mann, Mann, and Anderson. I like the realistic sheen that Clay puts on the characters, as well as the depth added by Clay’s work with Seth on inks. Anderson’s use of blue hues through much of the issue illuminated the feel of the city, deepening its emotional ties to the characters.

There are some absolutely beautiful pages through the issue, particularly the double-page spreads. The first couple within the issue make innovative use of words to mark the parallel of events, while all of them are done with a beautiful juxtaposition between a young Bruce’s fears and how the Trinity represents them. These images capture the raw and emotional nature of this issue in spectacular fashion and with stellar skills and execution.

Trinity #3 is yet another eye catching and evocative addition to one of DC’s newest series. I enjoy the emotional trips into the minds and the pasts of each of the characters, as well as Lois’ inclusion as a gamechanging element by the end of the issue. Between art and story, this team is doing the DC Trinity justice and I appreciate their care in crafting this narrative. There seems to be so much quality work and storytelling in our future, and this issue is clearly no exception.