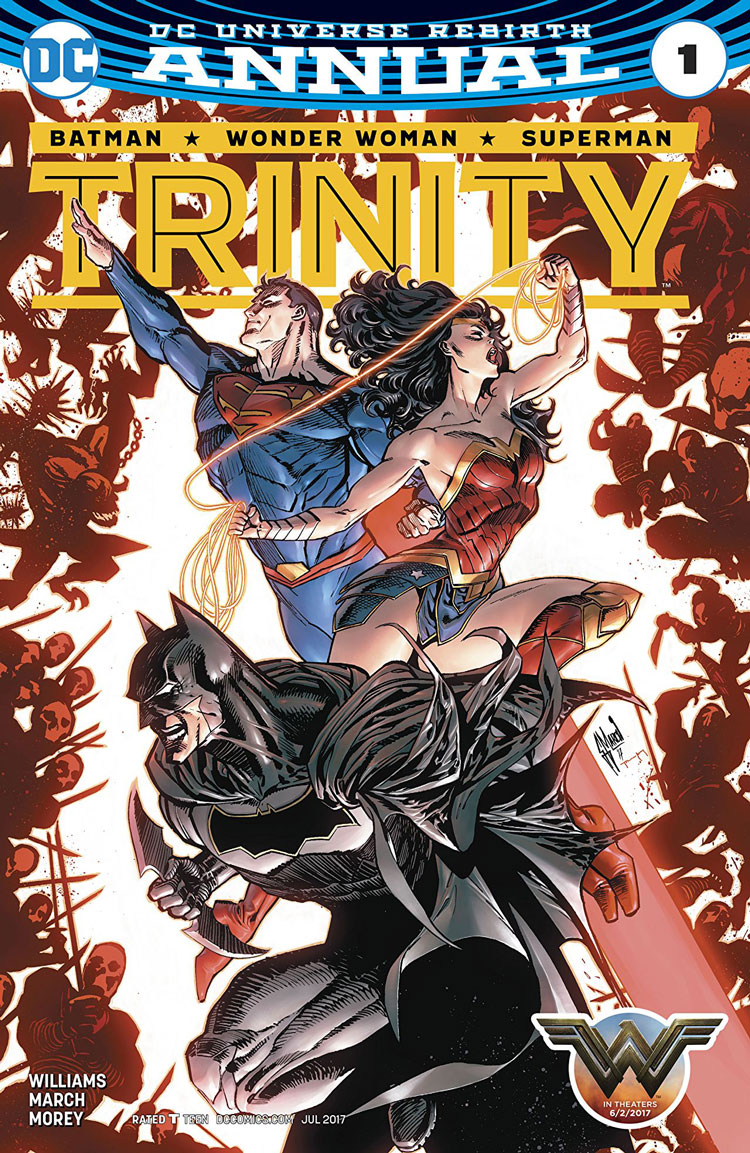 “Omne trium perfectum.” This latin phrase literally means: everything that comes in threes is perfect. While each is powerful on their own, together they make an unstoppable force both in the story and in comic books as a medium. The Trinity Annual #1 gives us an instantly classic story of the god head of DC’s pantheon ready to make the ultimate sacrifice to save mankind.

Rob Williams’ story is a prime example of the world’s greatest heroes at their best both on and off the battlefield. In the past, the three have shared a variety of different kind relationships. They go from being at each other’s throats to being in love with each other.

This is a refreshing look at how the trinity should be. These are Earth’s mightiest heroes that we look to for protection, guidance, and to set an example. If they can’t get along, how are we?

This issue gives us moments of them in close friendship and close to death but they remain constant in each. The story is written extremely well and moves quickly with the heroics of the three fighting an unexpected foe. No spoilers, but this DC character hasn’t been seen in the universe since Rebirth and it is good to see them again. While the bulk of the book is dedicated to the action it is still the short quiet moment that the three enjoy together at the beginning that stands out.

It is another prime example of the direction DC has been heading with their classic characters by bringing them back to a golden age of heroism minus the angst. The dialogue is perfect for this issue and shows some excellent writing skills by Williams. Overall he tells a nice self-contained story that shows what makes our heroes super.

Guillem March’s art matches Williams’ story perfectly. He gives us iconic classic looks at the trinity in action. Each member has their key kinetic poses with Wonder Woman looking the fiercest. In fact, of the three March portrays Princess Diana the best with Batman coming in a close second. Superman looks a little too muscle bound at times, but that’s ok, because he is Superman.

Especially nice are the smiles that we get to see on the members of the trinity. This is a time of Renaissance for the DC universe and it shows as we even get to see Batman smiling multiple times throughout this issue. One of the best things about this issue is the enemy that our heroes face and it is one who has not been an enemy for them in the past. He is drawn extremely well and will make the reader wish we would see him around more often.

March’s shading is a nice technique that sets apart the heroes from everything else. While the villains and the backgrounds are line shaded, the heroes are for the most part solid shaded. This gives them a more dramatic and wholesome look while everything else looks gritty and imperfect. All of the art has plenty of details to it make the character’s hair, textures, and costumes all look superb. Let’s hope he is given more opportunities in the future to draw these heroes either as the trinity or in their individual books.

Trinity Annual #1 was an uplifting look at DC’s perfect three. The story brings them together in familial love and the art work weaves them together in an epic modern tapestry. It’s an issue that ties into the DC Universe as a whole, but self-contained enough to be enjoyed as a one off. Don’t miss this important issue.