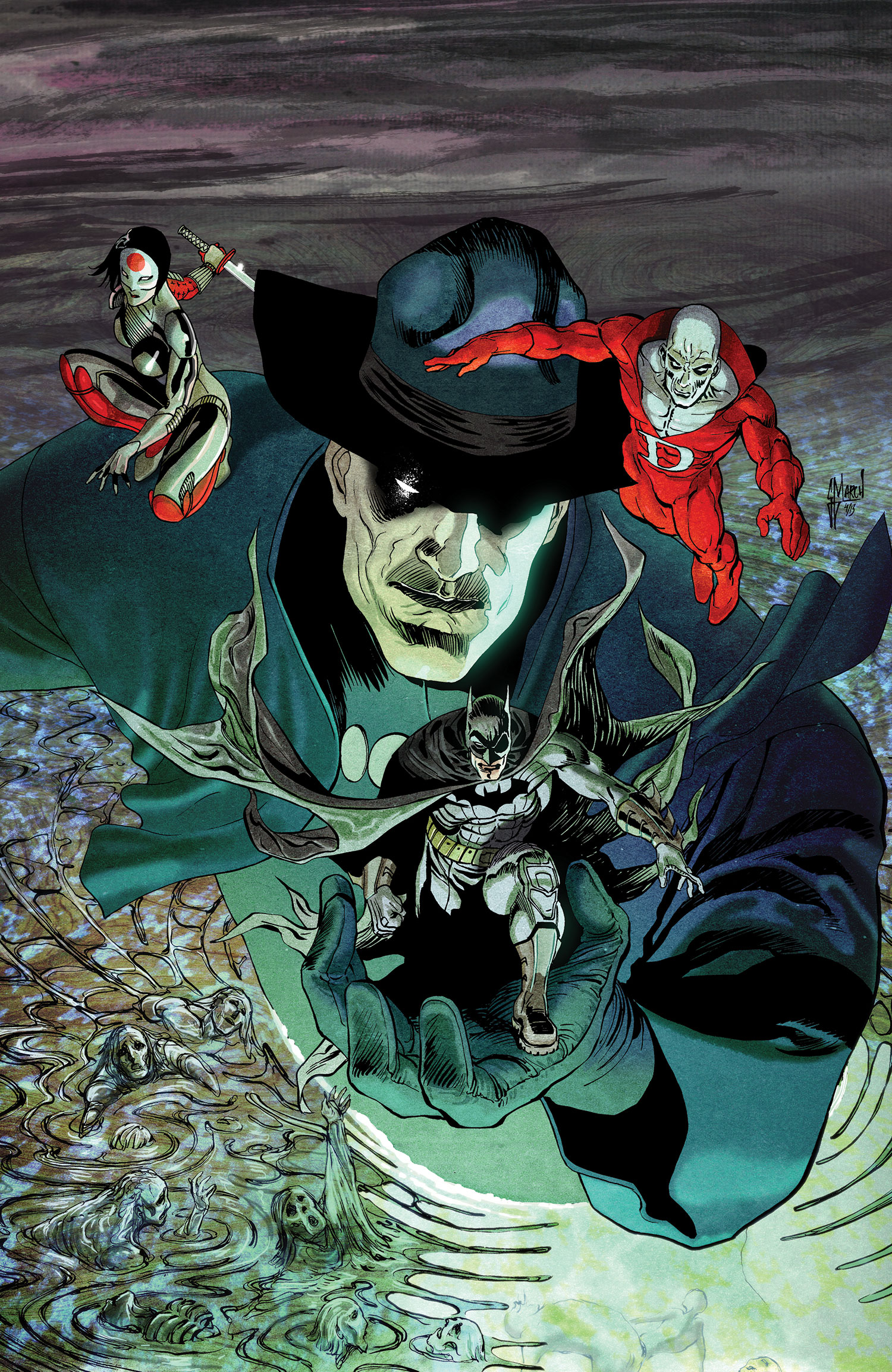 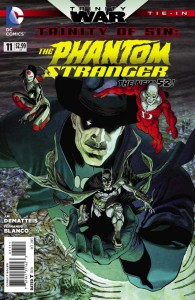 Spinning out of last month’s Justice League Dark #22, the heroes who broke off under Batman’s command, including the Stranger, reconvene here at the House of Mystery before their next big leap of faith. In order to discover how Doctor Light truly died, the team will go right to the source — the Doctor himself, now a resident of the afterlife! But wasn’t the Phantom Stranger just warned never to return to this side of the holy veil?

DeMatteis continues his solo run on the newly renamed Trinity of Sin: Phantom Stranger with another chapter that feels ever more so contemplative and reserved, even amidst some pretty fantastical action. Travelling through the first layers of the afterlife, Batman, Katana, Deadman and the Stranger get to witness and experience “what might have been” — an irony not lost on the Batman as he remains professionally removed from the fantasy of his own parents reciting another self-reflective tale, A Christmas Carol by Charles Dickens. Moments like these remind me of just how literate the characters in a J.M. DeMatteis title always are, although I’m not sure I’m fully understanding the Stranger’s limits on powers or specific motivation. At one point, he claims to have put an idea in another character’s head, and is seemingly willing to sacrifice everything for the good doctor, already gone, but not for Superman, who still remains on trial. The moments of clarity Doctor Arthur Light experiences, however, are quick but exceptionally poignant, and adds more to my disappointment that he was a rejuvenated character gone too soon. Hopefully we’ll be seeing his wife Kimiyo meeting up with a certain trenchcoated individual soon enough. That is, if the Stranger even survives this month.

Fernando Blanco is settling in beautifully to the rhythm of this monthly title, now on his third gorgeous month of pencils for Phantom Stranger. Blanco manages to capture the distance and coldness surrounding the Stranger’s demeanor without losing the sense that he actually has feelings, thoughts, and desires. It’s always been a difficult balance to strike for the character, and the artist manages it with flying colors. His versions of heaven are magnificently rendered (although, again, I’m not sure why the worst neighborhood in heaven would be rendered as a 1930s Brooklyn neighborhood — are stickball and apple carts now universally reviled?) with enough variety to calm even the most resistant arrival to the afterlife. His Zauriel comes off as menacing without appearing cruel, and takes a four-page introduction in a limbo-like environment and steeps it with such love and a care for dimensionality that one can’t help but marvel at its depth.

Ultimately, while the goal behind Batman, Katana, Deadman and the Strangers’ impromptu travel in the world beyond life is left unfulfilled, the journey to get there was very pleasurable. A tie-in issue well-worthy of inclusion with the main “Trinity War” series, Trinity of Sin: Phantom Stranger #11 sets the character up for his own disappearance in the wake of Villains Month, and, should he return, quite the conflict with heaven on his hands. October can’t come soon enough.