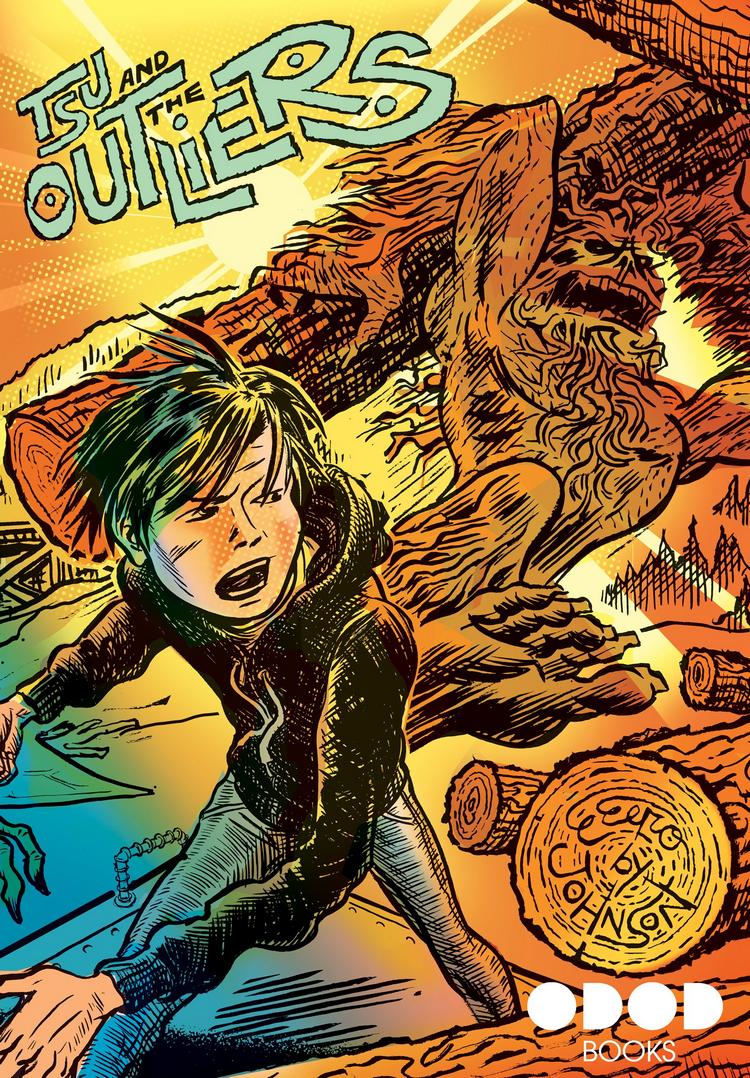 Strange monsters seen in the shadows, old cars causing accidents with local school buses, monkeys walking around in human clothes – mysterious happenings are going down in the nearby woods in this volume of Tsu and the Outliers.

Johnson has created a strange reality of urban legends. I like that many of the creatures are newer myths, like chubacabras and bigfeet. I like Tsu’s connection to the particular monster that lives in his woods and how vital he is to the ominous mission the strangers that come to town seem to have with his friend.

Tsu in general is a likeable character. I love the moments alone with him. He seems to show more emotion, is able to be himself without people constantly judging him for being nonverbal and asking him questions he obviously cannot answer due to being nonverbal. There’s this feeling that the world of average humans is constantly antagonizing him while the underlying reality of mystical creatures is a welcoming place for him, this place where he belongs and can grow as a person in.

The art in this graphic novel is rough. Not rough as in sketchy, necessarily, or bad, but has a texture to it that feels centered on bringing a feeling of unnervingness to the reader. It draws out the bizarreness and the world of myths and lore that not many people see in the world of the comic. It sets a sublime tone to the overall story that I think would not be there without this particular style of art.

The creature designs for the monsters are fun. I like how T-Chok isn’t necessarily completely covered in fur like a generic bigfoot, but shows some of his skin, these circular designs of what looks to be tattoos across his entire body. I like the dragon-like design of Chuba, this strange mixture of bat, lizard, and bird. I especially like the professor. I like how grotesque he looks as a monkey and how he’s rotating through a variety of different human clothes throughout the volume.

I like the black and white mixed with only a particular color each segment of the comic. There’s something about it basically being an inked creation with a dash of a pastel yellow-green or a baby blue or a light orange that makes it feel uniquely colored. Each color sets a tone for the section its in, making the sections distinct and bringing a layer or atmosphere to the page.

If you like bizarre tales of kids joining gangs of mythical creatures, you’ll probably like Tsu and the Outliers. It’s an intriguing romp in the woods with American legends.