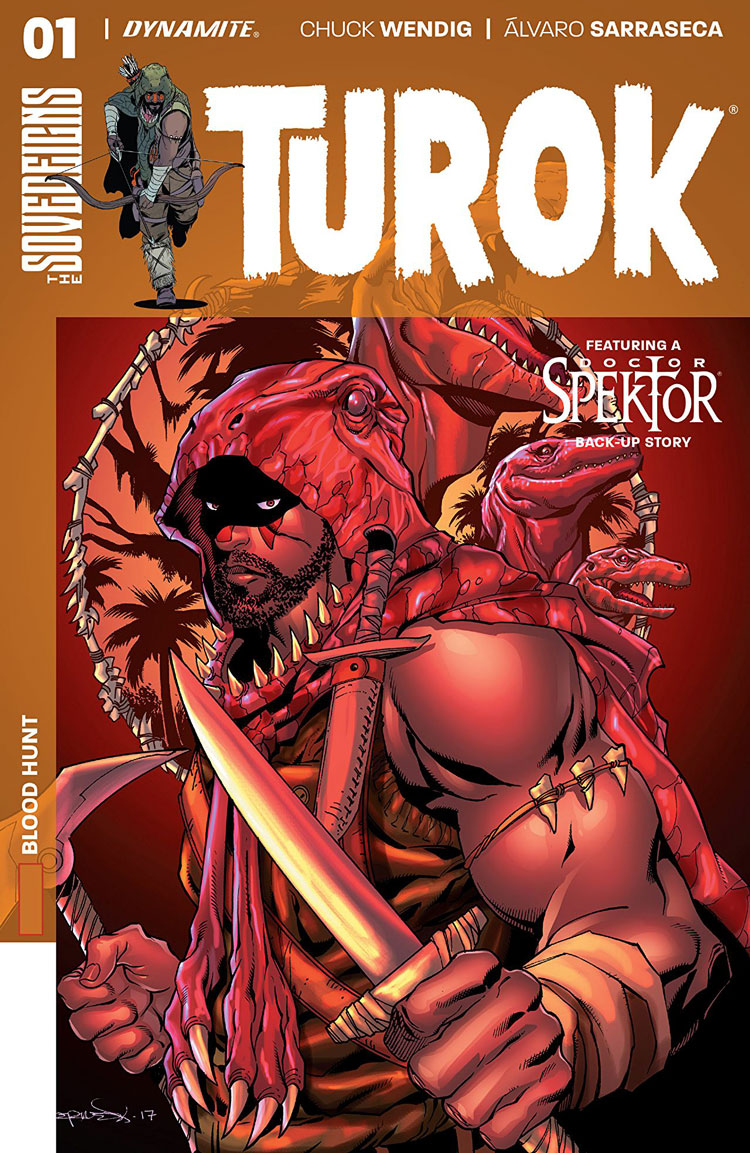 I have been enjoying the recent revival of classic Gold Key characters form Dynamite Entertainment. Historically, these Gold Key characters have been directly marketed toward men and have struggled through different publishers and mediums, their popularity and intrigue dwindling steadily since the early 1990s.

However, with some stellar creative teams, updated concepts and stories, and innovative, exciting art, Dynamite has been able to successfully revitalize these classic characters. Turok, frankly, was the Gold Key revival I was most concerned about.

Turok has struggled through the years on a distressing seesaw of being too campy, too weird, or too offensive. Cultural appropriation of native culture, strange political leanings, and pale attempts at being relevant and cool have landed Turok in a camp of characters that I thought should have been forgotten — but this introductory issue of Turok from Dynamite Entertainment may prove me wrong.

We have seen glimpses of what Turok is up to in the plot and backups from other Dynamite titles. This issue starts off at a cold open, jumping right into the action. This could have been confusing, but the plot develops at a steady pace and introduces the setting through narration and action, which sets the tone for the comics and cleverly avoids a long block of boring exposition. There is not a lot of forward momentum in this issue, but it is plainly set up to move at a quick pace through the subsequent installments, which is a great start for this series.

The art and design of this comic is definitely the star so far, as the plot will likely develop more through the next few issues. Turok’s design is the most appropriate I have ever seen, which speaks to the careful considerations of the creative team in distancing Turok from his rocky past. The saurian Varanid Empire, the race of fascist dinosaur people who rule the Lost Valley, and the other races included in this realm are updated as well.

The muted color palette of grays and cloudy blues brings a somber note to the comic, but the contrast of bright, almost neon, greens and oranges brings an updated feel. Action scenes and fights are split between panels, which makes the action of the book move quickly and allows more movement and progression of the plot through the art. Overlapping panels and well-dispersed scenes with minimal background help balance the detailed illustrations and keep the plot progressing smoothly.

Lettering on this book is in line with the rest of the Gold Key series, which provides a steady connection throughout the different characters and storylines in this universe. This is most beneficial when different characters interact, as Turok and Magnus would have completely identifiable lettering corresponding to their character and setting, but even in a Turok-focused issue, his specific style of lettering enhances the tone of the book and complements his character. Overlayed SFX and innovative lettering arrangements help to bridge panels and action, creating another layer of art that enhances the action and movement.

Overall, Turok is still catching up to the other Gold Key titles, but that makes sense because there is more bad representation clouding the history of this character than any of the others. This first issue was a solid introduction, but it might be too much set-up and not enough action to hook new, unsure readers. If this book can keep a steady forward momentum and continue to create a more modern, exciting Lost Valley, it will be a great addition to this line of comics.