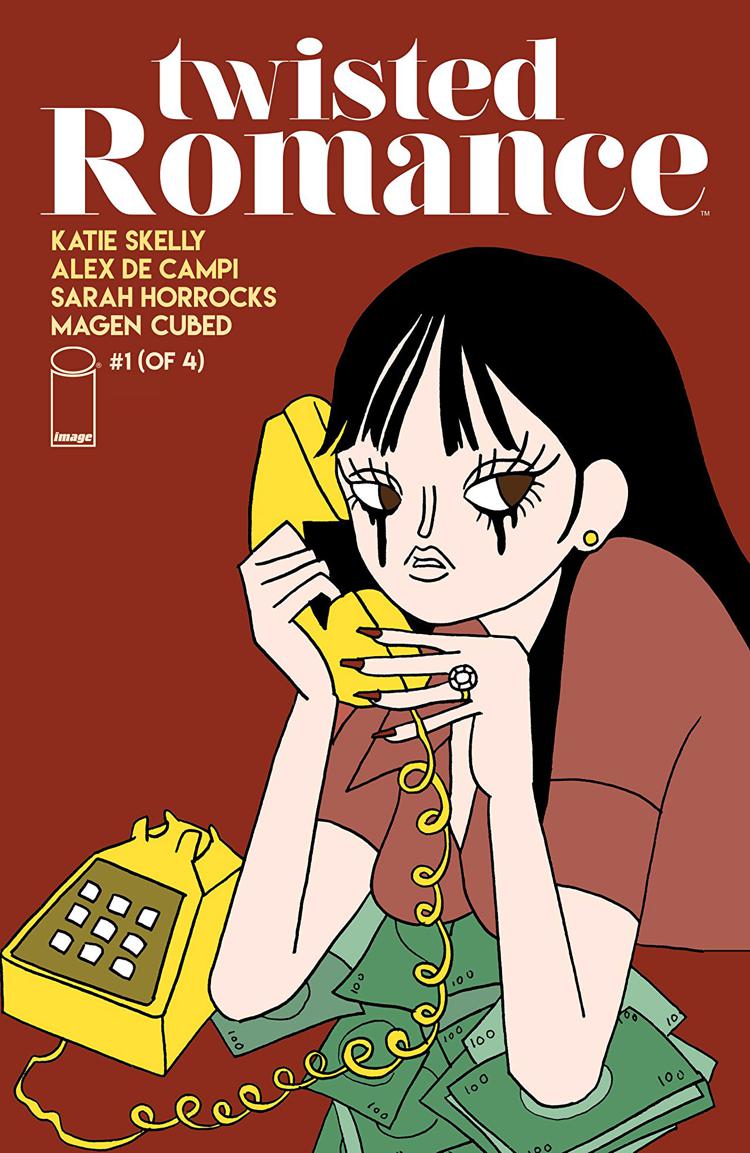 Appropriately timed for the season of love, Twisted Romance presents readers with a non-traditional, but beautifully delivered, look at love. If the reader’s idea of love or romance is not open for interpretation then they may find the first issue in the limited weekly series hard to swallow. Not all love, though, is the romantic musings of long dead poets. Some love is as cold as the envelope of a pharmacy bought greeting card while others is as deadly as mixing bleach with ammonia. Twisted Romance #1 takes readers on a first hand ride through the bloody side of love.

“Old Flames”, the first of three stories in this issue is written by Alex de Campi and takes us on a journey through a tale of betrayal, revenge, and disco. The bloody imagery in coloring, aesthetics, and blatant droplets imparts a passionate feeling to the reader as they progress from panel to panel. It also foreshadows a twist at the end of the story nicely. The story quite literally comes off the page involving the reader better than regular first person narration. When the story is tightly contained within the panels in a layout like these, whatever falls outside bridges the gap between the fiction and reality of the readers experience. The basic story is simple but the history that accompanies it gives it much more weight to what happens. There is a melodramatic poetic flow to the characters speech that takes the reader back further than the 70s and is almost more noir than disco. It works, though, with the macabreness of the story. In similar fashion the artwork by Katie Skelly with it’s vivid colors definitively grounds the story in the 70s. The colors that Skelly chooses almost tell the story almost by themself. The colors takes us from grounded neutrals, builds with the story as it adds brighter exciting colors and then a focus on the dangerous reds and passionate oranges before ending in a calm pastel final page. The entire story is a feast for your emotional senses.

The second story “Leather & Lace” is a prose narrative by Magen Cubed that focuses on a Wendigo hunt. There is more to it than just a monster story as it focuses on the relationship of the characters involved in the hunt. The violence of the monster attacks is very real and a punch in the gut while the love that is forming and deepening between the characters is just as deep. The story is very matter a fact in the way it deals with the monsters and then immediately after moves to hanging out in the bar singing karaoke. Cubed does an excellent job at bring the reader into the story with details that react strongly in the imagination. It’s placement between the two very artistically exciting stories both engages the readers mind and acts as a good stop gap. It’s a deceptively romantic non-traditional love story that will leave the reader with a smile.

The third tale in this short anthology, “Red Medusa”, is a tale of the anger born from a lover scorned. It is full of frenetic motion (and emotion) in the line work and colors. It’s mood feels like an approximation of the anger, jealousy, and revenge felt by the receiving end of a broken promise. It’s a trip on the other side of love down a path to a hellish end. There is a connection here to the romantic fatalistic love of Greek tragedies both in the character’s descent into hell and in the delivery of the text. It takes a couple of read-throughs to let your eyes adjust from the clean artwork of Skelly to the chaotic symphony of Horrocks but there is a passionate beauty seething beneath.

Overall Twisted Romance #1 is the perfect introduction to the series. Not all love and romance is candy hearts and flowers. If you are unwilling to accept the fact that love is as diverse and complicated as the human race then this book won’t be for you. However, if you are ready to look at love from a different angle then you should definitely pick this book up.