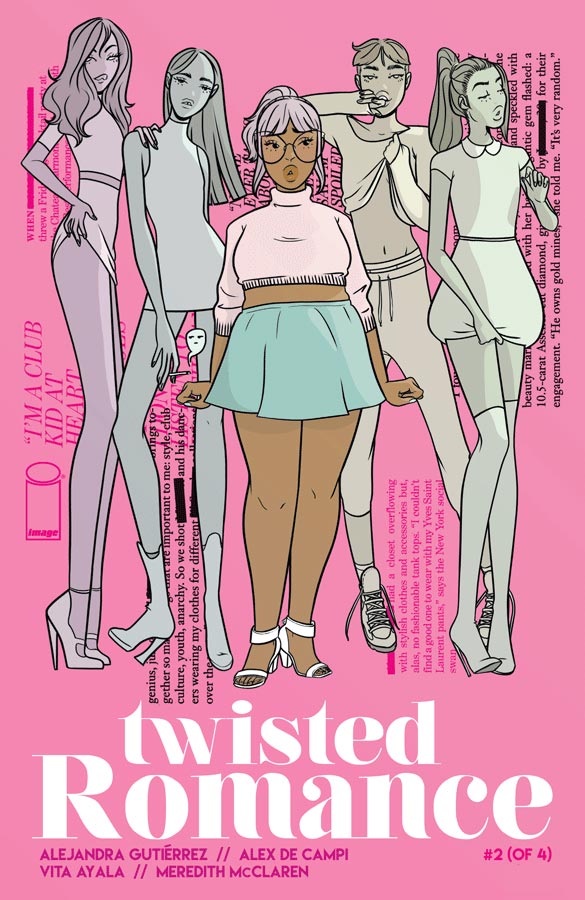 Difficult as it might be to believe now, there was a time when Image was known more for quirky anthologies than it was for offbeat pop comics or extreme superheroics. Series like Flight and Popgun helped push Image into the 21st century by showcasing the diversity of talent the publisher fostered and anthologies built around the lyrics of Tori Amos and Belle and Sebastian even helped lure nontraditional comics readers to Image.

This is the era of Image Alex de Campi seems to be pulling from with her new anthology series Twisted Romance — only in a much more internet-friendly portion size than those hefty tomes. She’s wisely sticking to a “two comics and a prose story” template that allows her to show off some of the best and brightest new voices in comics without overwhelming new readers.

Where the first issue of Twisted Romance lived up to the weirder implications of its title with its stories of incubi and succubi mercenaries, a vampire crush on a monster hunter, and necromance rituals, issue #2 of the series focuses on twisted in the clumsy sense. There is nothing supernatural in this second installment (though there is perhaps a human/nonhuman pairing) but there are plenty of twisted tongues and romantic entanglements and complicated feelings.

Twisted Romance #2 opens with “Twinkle & The Star,” an endearingly down-to-earth work by Alejandra Gutiérrez and de Campi about Twinkle, a photographer’s assistant, and Nick Powell, a shy celebrity who wanders into her life. The story itself is light and breezy, its climax not a big dramatic showdown but a frank depiction of two people working through expectations and revelations like understanding adults. But de Campi is wise to give Gutiérrez so much room to focus on the characters’ reactions to one another and Twinkle’s inner thoughts and fantasies.

Gutiérrez approaches character design and color like Brandon Graham with a flair for cartoonish expression that rivals Jamie Hewlett at his peak. These traits coupled with her fearless embrace of white space makes for truly dynamic and enthralling storytelling.

Where even veteran comic artists sometimes struggle with giving their characters unique expressions and emotions, Gutiérrez brings her characters to vivid life in every panel, with extreme close-ups on individual features— like sensually bitten lips, menacingly raised eyebrows and shoulders slumped with the exhaustion of overwork— providing delightful story beats.

There’s a similar emphasis on body language in Vita Ayala’s prose short “Back at Your Door,” as well as a focus on how misreading body language can delay or disrupt the start of a relationship. Whether by design or by accident, the prose shorts in Twisted Romance have also so far focused on that awkward part of romance where people are figuring out whether or not they’re interested.

In the case of “Back at Your Door,” the confusion is between Luz, an openly queer pre-law major, her new friend Adrienne, also out, and Luz’s straight-appearing high school friend Maddie. Luz is interested in both but a complicated history with Maddie and an inability to figure out Adrienne’s intentions has her too anxious to make any moves. The story is told from Luz’s perspective but it has a welcome honesty to it, making it closer kin to a modern indie flick than a melodrama.

Meredith McLaren’s entry “Would You Even Know It?” is the most high concept work in this second issue. Navigating similar territory as the film Ex Machina, except with far less violence and tech bro misogyny, McLaren’s story explores the developing relationship between a woman and an “AI” trying to prove to her it’s not a human troll.

McLaren’s linework and coloring is suitably crisp and exact for this technological drama, yet it’s warm and inviting, with a rich pastel palette and soft, lush character design. Though it’s dialogue heavy, “Would You Even Know It?” is never cumbersome or dry. Instead, it has the rhythm of a screwball comedy, making its metaphysical soul searching easily digestible.

All three of these works speak to de Campi’s estimable talents as a curator as well as the richness of the booming indie comics environment. Like its Image anthology ancestors, Twisted Romance serves not only as a showcase of creators but also of stories that veer away from the too frequently action-obsessed concepts of the mainstream.

Smart publishers and editors should be taking notes from Twisted Romance because this is what the future of comics is going to look like.