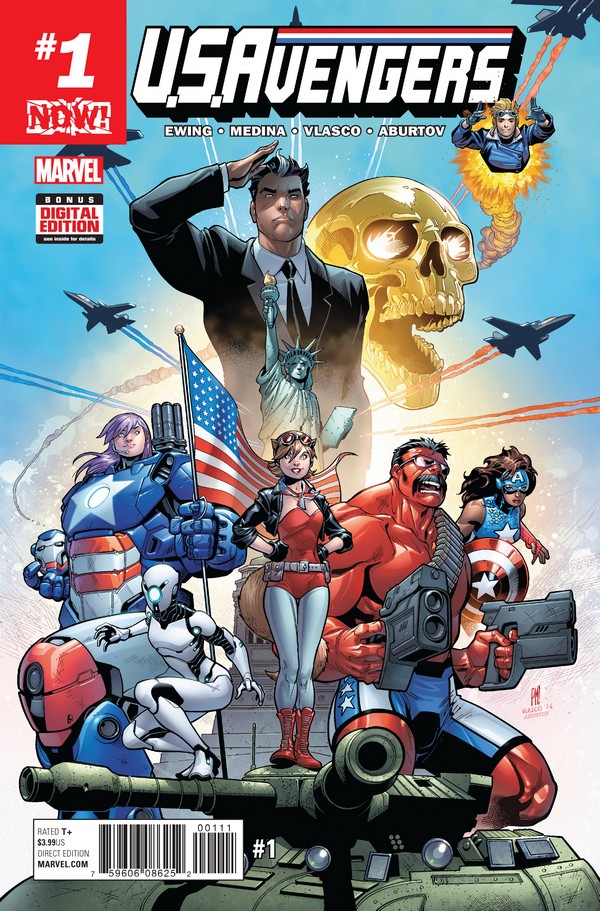 Roberto Da Costa, our newest Citizen V, is leading a new team of powered individuals in the fight against crime. Through their efforts to take down a roaming volcano helicarrier, each team member gives us a glimpse into their lives and their motivations. A new player arrives in the end, offering a for now unknown challenge to Roberto, and elsewhere a new power rises.

U.S.Avengers #1 is an interesting start for a new series. Sometimes the Avengers moniker can carry itself, but other times it needs some propping up. This series will need some support to carry the team and the story. Some of the parts work extremely well, while others felt unnecessary. The story may have worked better as a zero issue than a number one because it’s developing but at a pace which makes it tricky to want to stick around. I like the characters, especially the new(er) ones, and I want to see more of them, but the story is going to have to be more interesting for that to happen.

One of the areas that could have been the most beefed up was the appearance of Danielle Cage, aka Captain America. If you’re like me, you’ve wanted to know what would happen with her: will she develop powers or even be a part of the superhero community? Her surprise appearance felt far too short and she could have easily carried the story with her arrival. What I hope is that there’s more focus on her later, but to see her essentially blink onto a panel, only for the story to immediately shift, was disappointing because it was a line that should have been picked up immediately.

Al Ewing typically has a knack for writing teams, but this first issue seems like some things are missing. If it were giant sized, I think it would have more room for what the first chapter could have told. I love the introductions to the team because they made each of them interesting, especially because they could be the starting point for the important interactions between the members. Overall though, Ewing’s beginning could have been more compact, or used more of the elements which made the story work. This first issue doesn’t have many memorable moments, which could be a challenge for each subsequent installment.

Paco Medina, Juan Vlasco, Jesus Aburtov and Chris Eliopolous craft immensely immaculate imagery. This style is helpful for establishing a new team of Avengers, which I feel needs to have the art on point in order to help the series survive. I like Medina’s dedication to detail, layered with Vlasco’s stellar inking, and Aburtov’s colors are bright and hopeful, creating new dynamics for the story. However, I’m not a huge fan of Doreen’s costume redesign. The red, white, and blue motif is already a bit on the nose, but her scheme seems to be the most off. Otherwise, I like the crisp and clean visuals, from the sparkling blue skies to the incredible attention to detail.

U.S.Avengers is a series that may need some time to build. There’s just enough there with the cast of characters, but maybe not enough of what it needs. I like some of the setup, especially that this title may be more prone to keeping up appearances, but it also could have gone further with more diverse characters. It may be worth a shot, though I could also understand why some readers may not be riveted by this first story.