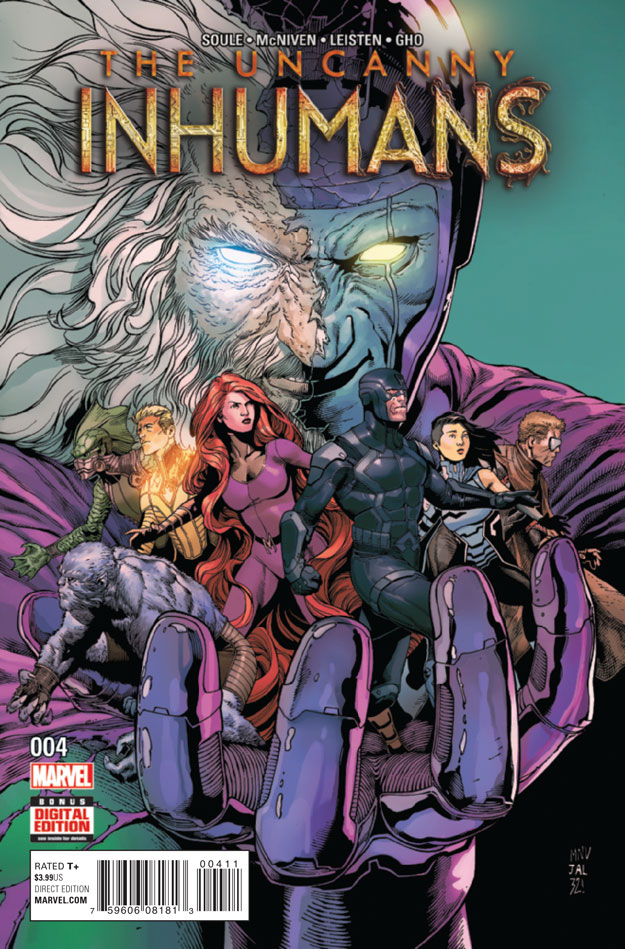 Charles Soule closes out the Royal Family’s hunt for Black Bolt and Medusa’s son that has kicked off the Uncanny Inhumans series, and he does so well. I like Soule’s take on these characters, their relationships, and their recent challenge with Kang. Soule writes these characters well, I am a big fan of his take on Medusa and Black Bolt, and Ahura is a welcome addition to the mix. His power set is very interesting and how he reacts to the current state of his family will be an interesting plot point going forward.

Soule handles the “big gun” Inhumans well, and the supporting cast gets their time to shine. I like his take on Reader and he does a good job making Beast not feel out of place with this cast. I could do without Johnny Storm, but that’s 100% personal bias against the character and no reflection on Soule’s handling of him. For my own ridiculous pleasure, I hope I get to see Black Bolt put him in his place a few more times, but, I suppose I should talk about this comic again. There is a huge cast in play and Soule has chosen their mix well. This is the “big” Inhumans book and it is delivering, with stakes as high as an Avengers book and powerhouses that could match any Avengers squad or X-team any day of the week. Soule has a good handle on this world and I like where he’s taking it.

Steve McNiven is one talented artist, able to pencil exceptional realism. The detail he puts into these images is phenomenal and his action sequences are fantastic. If I had a criticism, it would be that with the intense detail the characters can look stiff at times, but that isn’t the case throughout the entire issue. There are great moments filled with emotion and McNiven pencils Medusa very well. He showcases Ahura’s power set nicely, and this really is just a good looking issue. Sunny Gho’s colour work is consistent, though the palette chosen is more subdued than what we’re seeing in other Marvel books right now, including All-New Inhumans. The Inhumans are a dynamic crew, which Gho shows with colour work surrounding their power, but the Inhumans themselves don’t explode from with flashes of colour. This allows the detail in McNiven’s artwork to not be overshadowed, but I’d argue it removes some of the dynamic nature of these characters.

Uncanny Inhumans #4 is a rock solid comic that entertained me with a great story and very good artwork. Soule has a great handle on these characters and I am excited to see where he takes the Inhumanverse of the Marvel U with issue #5 and onward. Ahura is a dynamic addition to the cast and I think the future is bright for this series. I’d certainly recommend anyone checking out the first four issues of this series, you won’t be disappointed.