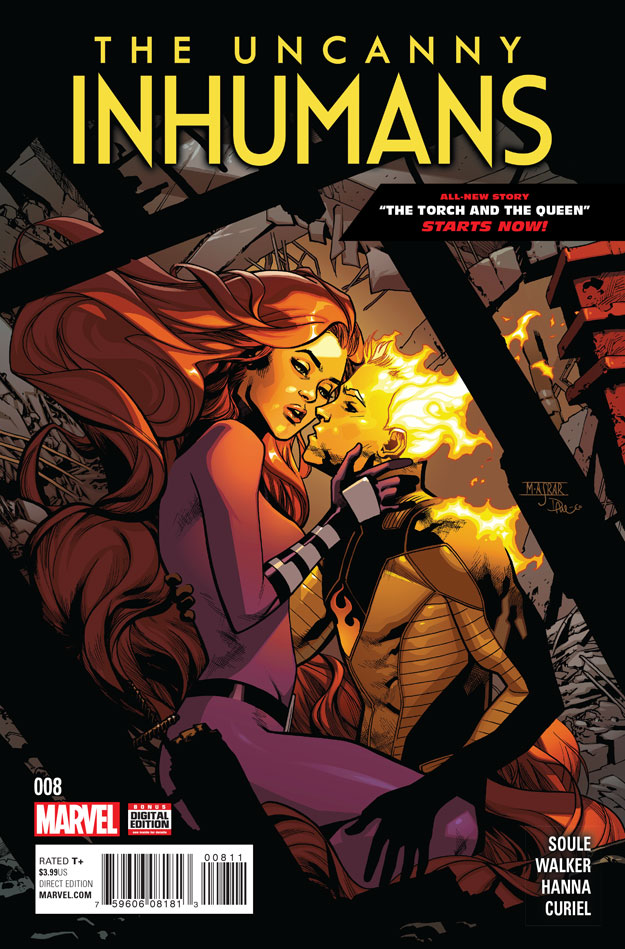 The early days of Johnny Storm and Medusa’s relationship….revealed! This issue focuses on just these two characters, how they became a couple and what the ramifications of such a relationship could have within the Inhuman world, considering Johnny’s romantic history with another prominent Inhuman…

I’m going to throw some bias out on the table right now: I’m not a big fan of this relationship, and I’ve never been much of a fan of Johnny Storm. My favourite Johnny Storm moment I have ever read is when he sacrificed himself during Hickman’s run, so that’s where I stand with Johnny Storm. I am a fan of the marital tension between Medusa and Black Bolt, though, as Medusa has emerged over the past several years as a much stronger character than Blackagar and certainly more than the voice of the King. She is a greater leader than he, and being in a relationship signifies her autonomy from Black Bolt, which I am a fan of.

So yeah, I’m conflicted about this relationship.

What I’m not conflicted about, at all, is Charles Soule’s writing. His Medusa is “my Medusa” as she is strong, powerful and one hell of a leader of not just a nation, but a leader of a people. She is a better leader than anyone I’ve seen elected in the real world, and she exudes power while also being capable of compassion. Soule’s dialogue for the Queen in this issue is the perfect blend of monarch and person, showing a side of Medusa we never see in other titles. He also writes Johnny Storm well, in that the character is a hot-head, but he doesn’t inherently piss me off like other interpretations of the character can. He balances Medusa well, and Soule writes the two characters as a believable pairing. Johnny isn’t simply here as a place to put a member of the F4 while they don’t have a title, he’s an integral member of this story. Soule’s shifts through time to show how their relationship has grown fills in a lot of questions that have been floating around since earlier issues, and the cliffhanger blows the roof off the powder keg. Inhumanity is even more interesting than before.

Kev Walker holds up his end of the bargain with the artwork, and I was surprised by how well he hit some of the emotional beats of the issue. His style isn’t necessarily what I would expect for an issue with this plot, but he sells the strain in Medusa between what she wants and what she needs to as a monarch, while holding a building up with her hair. His style reminds me of JRJR’s work, without some of the awkward anatomy that always pulls me out of the story with Romita, and overall I enjoyed his pencil work in this issue. David Curiel’s colours gave Walker’s pencils the right punch to make the art leap from the page. Medusa is a character that can be very dynamic when coloured properly, and Curiel nailed it. The artwork is a solid, cohesive package that tells the story well, and I’m looking forward to the next time Walker works in the Inhuman world.

Uncanny Inhumans #8 is a change of pace to look at Medusa & Johnny’s relationship, and it serves as a good fill-in-the-gaps story, giving readers a look at how this relationship came to be. The Inhuman titles look like they are on the verge of exploding into something big, and that’s just exciting. Soule, Walker & Curiel are a solid team and I’ll be game to read any future issue that has their names on it.