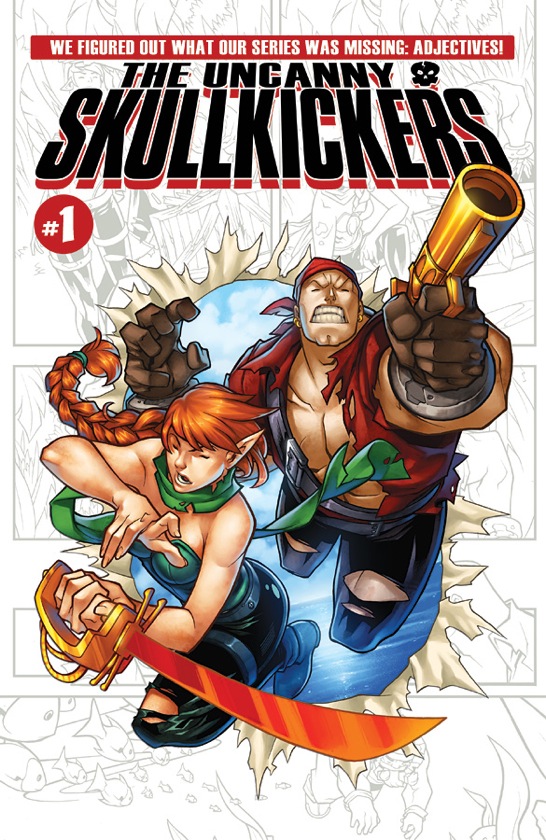 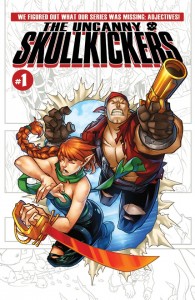 Skullkickers begins its new arc with a rebranding and a new number one. A strong jumping on point for anyone unfamiliar with the story.

Even with the added ‘Uncanny’, nothing much has changed for the series. Not to say that is a bad thing in the least bit, because this issue contains all of the fun and wild ideas seen in the previous 18 issues before. Skullkickers is  an adventure title in it’s purest form. Every page flip (or digital swipe) reveals a new monster, or trap, or any number of scenarios you wouldn’t have expected when you first opened the comic. Best of all, they work really well and nothing feels out of place. The book practically flew by with full throttle pacing and action. It was a fun read and kept its entertainment on the second and third reads through the next few days. The book has always been a two man show, but now we have an Elf named Kusia to partner up with Rex. They were a solid team and made for a few good interactions. They don’t quite have the same chemistry as the previous partnership, but their relationship is still very young and growing. The dialogue was light and fluffy. It fits the mood of the book well and didn’t take itself too seriously. Rex’s personality and undying positivity, with their situation and the status of his former partner, make a refreshing main character in a sea of brooding heroes in the comic book world right now.

How the story was told was a bit heavy handed though. Some of the conversations were more or less question and answer dialogues and didn’t leave much to the imagination. While it is a series trademark, the opener to bring new readers up to speed did not feel right in the beginning of the issue. The excitement and mystery of having two people wash up on shore should be enough to hook the reader who will (hopefully) fill in the blanks later.

One of the strongest parts of the issue, and the series in general, is how much fun it has being a comic. All those great things that are loved in comics of the past are in these pages either helping to enhance the story or parodied.  From the sound effects to the editor’s notes, there was so much love put into the pages.  Jim Zub also took full advantage of the medium and told another story on the bottom of every page. Little things like that really make Skullkickers stand out in a crowded genre.

In a fantasy adventure book, monster and character design are extremely important for the series to succeed. Edwin Huang and the art team bring these creatures to life with imaginative designs and lively colors. With a new setting, the jungle, the team really stood out and made a detailed backdrop for the characters to venture in.

A strong showing from the new number #1. A fun change of pace from the grim and gritty continuity heavy comics of today and a welcome addition to any pull list. There is also a very interesting back up featuring comic book script excerpts that anyone even remotely interested in writing a comic book should check out.